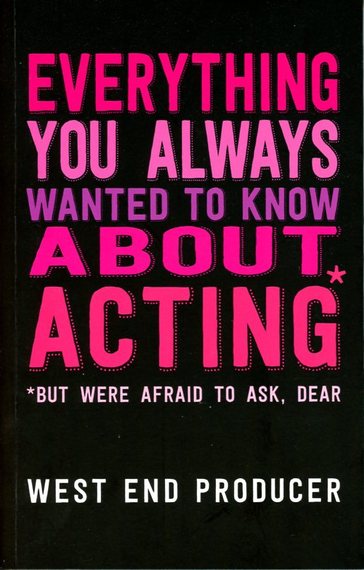 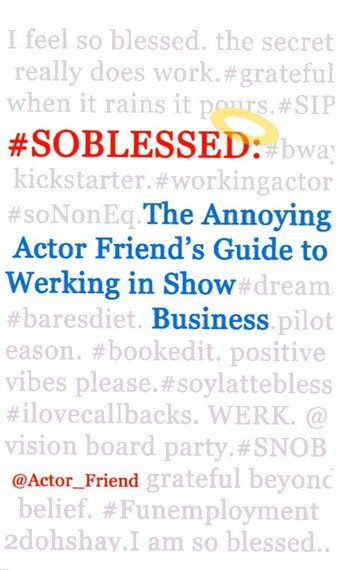 The rise of internet culture has caused many shifts in how we consume information, with one of the more amusing side benefits being the rise of the fictional Twitter user. Disregarding spambots, the anonymity that comes so easily online has birthed such figures as @BronxZoosCobra and @ElBloombito, to name but two. In the theatre realm, the sunny cheerleading of @BroadwayGirlNYC has found adherents, but the sharper tongues (or typing) of @WestEndProducer and @Actor_Friend have launched them into real world publishing, within weeks of each other.

For those who haven't been following them, a quick précis. West End Producer is, ostensibly, an individual on the production side of theatre in England, whose dishy asides about every aspect of the business always conclude with the simultaneously charming and condescending #dear. I have struck up a Twitter acquaintance with this person, we've shared a few jokes and they sent me a signed copy of their book. I've noticed their unwavering dedication to chronicling TV talent competitions as they air on weekend evenings (which can be bewildering, since the shows don't play in the US) and just learned of a mutual passion for Sherlock, but this TV fixation doesn't suggest someone at the country homes of those with bold faced names on the weekend. I'm newer to Actor Friend, whose full nom de tweet is Annoying Actor Friend, but the online persona is that of a snarky actor, seemingly more of a dedicated gypsy than an above-the-title star. While I won't guess at gender (though WEP's appearances in a latex mask disguise would indicate male, and in a book blurb, one writer suggests AF is female), I'd hazard that AF is in their 20s while WEP is likely 30ish (or more).

In their books Everything You Always Wanted To Know About Acting But Were Afraid To Ask, Dear (Nick Hern Books, £10.99) and #SoBlessed: The Annoying Actor Friend's Guide To Werking in Show Business (CreateSpace, $13.99), WEP and AF dispense pearls of wisdom in their trademark styles, freed from the chains of 140 characters at a time. Early in each book, one gets the full force of their characters:

"Casting Directors are usually very nice people who like drinking far too much alcohol, and mostly during the day. The ones that don't drink usually have other habits, which can't be discussed here - but often end in them being discovered on a bench outside Waterloo Station at 5 a.m." - West End Producer

"Even after you've questionably noted your music, nervously mumbled some directions, and shakily clapped out a tempo, there will be an accompanist who has no effing clue how to play your Jason Robert Brown song. Seriously though - whenever I don't get a callback, I usually find a way to blame the accompanist. It doesn't matter if they played my audition flawlessly. It's still their fault." - Annoying Actor Friend

"A serious actor has to approach acting in a serious way. This can be achieved by using various methods. One of the easiest ways is by not smiling - particularly if you don't have good teeth. A serious actor should always save his smile for special occasions. However, this does not mean you can't smirk. Smirking and smiling are two very different things indeed." - West End Producer

"As a performer, Annoying Actor Internet Law requires you to read anonymous online opinions about you, take them personally, and then complain about how all those people on theatre message boards are stupid, even though their comments are secretly murdering you from the inside out." - Annoying Actor Friend

Now you might imagine that an entire book of this arch tone would grow tiresome, let alone two, and I'd readily agree with you. That's where both of these books turn out to be surprises. #SoBlessed, while the thinner of the pair, both literally and figuratively, pretty much drops all pretense of a character in one of its longer chapters, "On The Road," which deals with touring. Offering a pointed critique of touring conditions and contracts, AF gets into some detail about the challenges of an actor's life on tour. AF's advocacy regarding compensation has taken on even greater urgency among some members of Actors Equity, with the full Twitter support and perhaps instigation of AF, has raised a stir about the pay structure of touring agreements over the holidays.

Everything You Always Wanted To Know About Acting is more comprehensive than its title suggests, ranging over many fields in the theatre, including producing itself. While the occasional Britishism may befuddle the less worldly reader, the advice dispensed among the punchlines is in fact utterly practical, simply delivered in a tone unlikely to be heard in classrooms at Yale Drama or the Tisch School. "When you audition," observes WEP, "there's always a moment when you're perfect for the role. It's the moment before you come through the door." WEP also wraps up the book by enumerating concerns that face the theatre, going beyond flippant remarks about Andrew Lloyd Webber to touch upon rising ticket prices, competition from the electronic media and the need for everyone in theatre "to be braver."

They may have found their fame in the briefest of missives and gained followings with their dark and knowing wit, but in the end West End Producer and Annoying Actor Friend are both passionately dedicated to the theatre, doling out genuine wisdom and information with nearly every wisecrack. If one is on a budget and has to choose between the books, I give the edge to WEP, even though those in the US have to wait for its release here in the spring via TCG (it seemed to be a favored holiday gift in the UK, judging by my Twitter feed). But both make for irreverent supplements to more staid but perhaps equally inspiring books in theatre. And they are not annoying. Not annoying at all, dear.