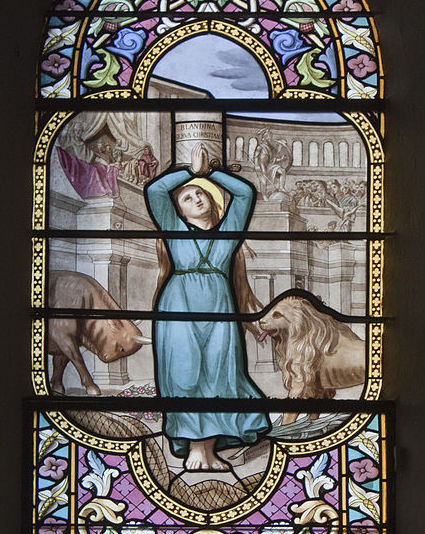 Image credit: This stained glass window from a church in Chamboeuf, France, shows an image of St. Blandina of Lyon. Blandina is one of the most famous early Christian martyrs. Photograph by Daniel Villafruela, slightly modified, from Wikimedia Commons.

How could the Kentucky clerk who refused to sign her name to same-sex marriage licenses possibly be equated with the men and women whose blood watered the seeds of the church?

Putting on my historian's cap, however, Kim Davis absolutely is a "martyr" in one sense of the word. She's claiming "persecution" when, in fact, no government is actually forcing her to abandon her faith. And that's exactly what many early Christians did in Rome.

For almost three hundred years, they cried "martyrdom" when all they were being asked to do was be a good citizen of the empire.

Unfortunately, today's journalists and political commentators have swallowed this Sunday-school version of "martyrdom" and "persecution" hook, line, and sinker. That's why the frenzied refrain "Kim Davis is no martyr!" (at The Daily Beast, Salon, and even here) rings so false. She's behaving in a way that is eerily similar to how early Christian martyrs behaved. These men and women refused, under any circumstance, to support the commonwealth in which they lived. They were punished for it. Kim Davis fits the profile perfectly.

The story of what happened when Christian Roman soldiers met the emperor illustrates the uncanny parallels.

The regiment, a mixture of Christians and non-Christians, was based in Carthage, modern Tunis. In 202 A.D., as a result of their outstanding contribution to the Roman military, they were given the equivalent of a presidential medal. The Roman emperor was awarding them laurel crowns for their bravery.

Like the way marriage licenses are given out today, the gift of the crowns to soldiers was the kind of thing that took place in countless other locales and jurisdictions across the empire. In fact, this one event would probably never have made history's headlines had not it come to the attention of one local pundit. Tertullian, a Latin church writer, thought the ceremony was a direct assault on the Christians' "religious liberties." Cue the outrage about "persecution."

"Where does Scripture say that Christians are allowed to wear or receive laurel crowns?" Tertullian asked, in a little pamphlet he published to fan the flames of resistance. Since Jesus had never condoned wearing these pagan crowns, the answer was clear: Christians were prohibited from participating in the ritual. What Tertullian was suggesting was that the soldiers take their gift, toss it on the ground, and stomp away -- because "The Bible" told them so.

Of course, that little fit would have gone over real well in front of the ruler of the known world. Hence, what we also learn from Tertullian is this: every Christian soldier in that regiment graciously accepted the honor -- and participated in the pagan religious ceremony which accompanied it -- without causing any fuss.

Every soldier, that is, except one.

Only he, Tertullian boasted, was the "real Christian," a "true soldier," fighting a spiritual war for God.

Then, like Kim Davis, that one obstructing righteous Christian was thrown in jail, where he became a "martyr" of the early church.

Undoubtedly, the story of the "martyrs" of early Christianity still holds meaning for countless faith communities. Many people today still look to these men and women -- some of them anonymous, like the Christian soldier mentioned by Tertullian -- as beacons of hope living out their faith in bleak, uncertain times. Indeed, for Christians living after Tertullian, the situation would deteriorate. Two periods of legalized discrimination against Christians blacken Roman history at the end of the third century and the start of the fourth century A.D. Many Christians did die during these government attacks. Many truly were heroic voices for their faith.

Everyone prior to that? They were "martyrs," too -- just of a different kind. Perhaps we should put Kim Davis in that category.

It might help us see the history of religious freedom in a whole new light. It certainly changes everything we think we know about the "triumph of Christianity."

A writer, editor, professor and champion of causes