Ajay Chaturvedi is the founder of HarVa, the first BPO set up in rural India which employs only women and author of the widely acclaimed, Lost Wisdom of The Swastika.

A recent article in several leading newspapers broke the news that Indian scientists had traced the origins of the Swastika back to almost 11000 years, predating even the Indus Valley Civilization, which is saying a lot. While the team led by IIT professors exults about how this fascinating discovery helps prove that Indian civilization is much older than what history has us believe and instils national pride, perhaps it is a good time to ask ourselves what's the fuss all about?

In India the Swastika symbol is ubiquitous. Look around; on cars, homes, temples, gurudwaras, shops, building, cows, buffaloes, camels, tattooed on people and innumerable more places. The Swastika grows like wild grass in India, sprouting in every nook and cranny without any care or attention.

What does the symbol even mean anymore today, to the average person on the street?

Is the once grand auspicious symbol of peace, good luck and positivity, predating even the Indus Valley Civilization, today reduced to just a fuzzy notion, a feeling or a vague idea?

Why should it matter?

Swastika Twisted to Meet Selfish Needs Swastika, the word itself translates to Su-Asti, meaning wellbeing. Most of the words when translated in any other language, especially from Sanskrit lose the meaning as these languages are meant only for a two dimensional space. One of the keys in the Vedas and Dhyan is the ability to explain and go to a fourth state, or the Chaturiya (Fourth) avastha (state). The fourth state is also known as the Turiya avastha. The fourth state is beyond waking, sleeping and dreaming. The symbol of the Swastika is that of a four-dimensional cube, and is used extensively in Vedic mathematics. 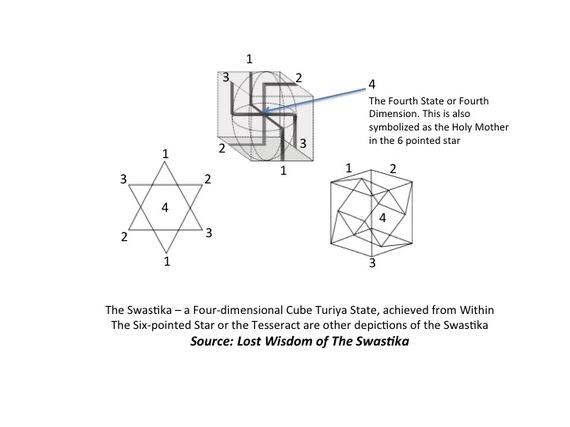 How, why and what, are deeper subjects that one can't just read about and understand. Unlike reading and learning other subjects, this is a subject of experiential learning.

Almost everyone I have spoken to thinks that Hitler took the symbol, inverted it, tilted it and then used it as an Aryan supremacist symbol. No. It's the same symbol. Nazis just tilted it and color-coded it. Rest is history.

So why did Hitler pick this symbol and misappropriate it? Well, it is happening today with haldi-doodh to turmeric latte or Basmati rice of Dehradun to Texmati rice of Texas. Opportunists, who can come from any race or color, tend to work on the principles of reductionism. They want to benefit the most out of an idea, so they pick what they believe is the most important ingredient.

Haldi-Doodh has been used as an analgesic in the Indian households, since time immemorial. Conventional wisdom also says that excessive use of anything, including turmeric, is harmful. Now it's being sold as a mainstream beverage at Starbucks in California. Quite a hit! People likely end up having more than one at a time. Fancy if one of the customers came back with a stomach problem in a few years, they would malign turmeric and possibly ban it medically. That's the risk of reductionism. In the popular movie, Oceans' Thirteen, Brad Pitt's character Rusty Ryan says to Elliot Gould's character Reuben, "If you need Vitamin C, why have an orange, just pop Vitamin C?" And that is where holistic living, loses a battle to reductionism. Antagonisms that follow are hard to beat.

As a society, we are very advanced in technology, today. A few centuries ago, people were adept at physical contact warfare. Similarly in the Vedic era, people were adept at the metaphysical. Being Arya was synonymous with that. There are people who are still adept at the metaphysical. Maybe this is what fascinated Hitler. But rest assured, the moment you attain Arya avastha, you can barely, not even willingly, harm a fly, let alone kill a human. Nazis were no Aryans. A lot of unrest that we see across the world today, leading to personal anxiety and unhappiness, is a result of lack of our own understanding. More than love and compassion, the world needs understanding of how people evolve. How races are real, religions manufactured. Climes are real, countries manufactured. The more we delve into the wisdom of the Swastika, the better we become as a collective, and happier as individuals.

Truth is Universal Ever wondered why Christmas falls on the 25th of December yet Diwali is a different day every year? If most of us, the urban elite only follow the Gregorian calendar, who are these underdogs, making these calendar entries that are all pervasive? Internet has been a boon but who determines it on the ground and who makes the Panchangs (Hindu calendars)?

For over 800 years, different invaders ruled India. Yet here is India, with 80% of the country having retained its Sanatan Dharma. Most Indians still go by this unsaid truth Ekam sat vipra bahudha vadanti - There is one truth, the wise know it by many names. They might follow any religion, Sikhism, Buddhism, Christianity, or any other, yet the spirit of universal acceptance echoes louder than anything else, in India.

The missing 'Indian-ness' in History The British ruled India for well over 200 years and yet, less than 5% Indians communicate in fluent English (Source: Indian Human Development Survey). This is because it has always been a language of the rich and the elite. One learns a natural Indian language in the surroundings one is born in, absolutely FREE. However for learning English, one has to go to a public school. These public schools are costly. English can't be learnt for free.

When I speak to my British or American friends, most of them like to read History books in their spare time. I used to wonder why; because History never interested me in school, AT ALL. Then it dawned on me that we were primarily taught British and Mughal history. There are sparing elements of actual Indian history. From a different perspective, the history we were taught was very war centric. No mention or explanation of the wisdom, arts and culture, latent in the Indian civilization. Maybe we wouldn't have grasped it, even if they did cover those aspects, back then.

There is an African proverb, 'Until the lions have their own historians, the history of the hunt will always glorify the hunter.'

The British mastered the art of writing history and they wrote it for us, for the most part anyway. It is only now that shackles are falling and realization of the true wealth of our ancient wisdom passed on, via Guru-Shishya Parampara (Master-Disciple relationship), is being witnessed. A lot of it is still unwritten and explained and passed on as experiential wisdom, by a Guru. There is a reason it wasn't written, another topic, beyond the scope of this article.

Despite Invaders, the Backbone Remains Unbroken Despite the 800 odd years rule by foreign invaders, the culture that has defined the Indian subcontinent is the rich Vedic Culture and it continues to be without much bolstering. The ancient sciences of astrology, astronomy to Ayurveda, are the rare esoteric gems that have kept the resilience of the society till date. The vedic societies are quadri-polar as opposed to a bipolar society, like in the US. Ever conjectured why even though India is a seemingly conservative society now, the Kamasutra was written in India here as well! One can fathom this when one understands the real philosophy behind the Swastika.

In the ancient times, when the kids were sent to the Gurukuls, the first initiation by the Guru was of Pranayam (the entire eight step system is referred to as Yum-niyam). It is only after gaining complete knowledge of one's breath, that the Guru would begin initiating the disciple on Dhyan (Medititation). The steps in Dhyan would then gradually lead to understanding human sensations via feelings. Sensations roughly translate to Samvedana, where the word Vedan comes from. The knowledge of the self, the universal self and beyond, begins with the breath. Breathe, be happy and realize your Swastika!

This Spirituality and Transformative Leadership series was set up as a response to the need to bring 'higher order' principles into leadership today and to spark an ongoing discussion as to the role that spirituality, as distinct from religion, has in today's world. It is a curated series that invites both Young Global Leaders and others with an interest in leadership to contribute to a discussion on the role that spirituality plays in leadership today. For more information, please see the following link for an overview of the origins of this project see http://www.huffingtonpost.co.uk/caroline-watson2/spirituality-and-transfor_b_7637984.html and for a link to all the blog posts in the series please click here http://www.huffingtonpost.co.uk/news/spirituality-and-transformative-leadership/