Whether one fantasizes about Hugh Jackman turning into Wolverine (with stainless steel blades replacing his fingers) or The Hulk's overly-muscled green torso suddenly bursting through a nicely tailored shirt, what was once reserved for the realm of the imagination has become a commonplace form of expression known as body art. In my travels around San Francisco I routinely encounter people who have physically altered their bodies with piercings, decorative plugs and multiple tattoos.

The wonders of rehabilitative medicine allow us to marvel at the achievements of Stephen Hawking (who suffers from a motor neuron disease similar to amyotrophic lateral sclerosis) and a multiple amputee such as Representative Tammy Duckworth. South African sprinter Oscar Pistorius competed in the 2012 Summer Olympics with carbon fiber transtibial prostheses in place of lower limbs that were amputated when he was only 11 months old due to a congenital disorder known as fibular hemimelia. 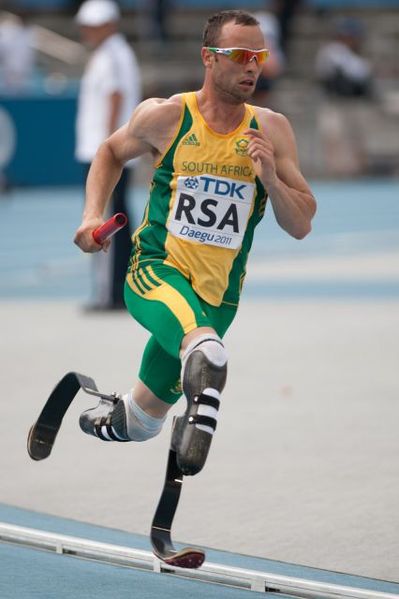 While many physical deformities result from birth defects, others are the results of unforeseen traumatic events. A character may suffer an injury in battle or be involved in a horrible vehicular accident. In real life, such events present tremendous obstacles to stage and film adaptations. In fiction, however, anything is possible.

During the recent San Francisco Olympians Festival, two new works focused on what can happen when Greek gods decide to experiment with gender. Whether taking a rambunctious look at reproductive rights or examining transgender issues through an ancient lens, these world premieres proved to be both fascinating and occasionally hilarious.

Back in the 1970s, Planned Parenthood came out with a poster that shocked quite a few people. It showed a sad young man with a distended midsection wearing a striped maternity smock. The "Mr. Mother" poster bore the message "Bet You'd Be More Careful if YOU Got Pregnant." Although a framed copy of the poster is hanging in my kitchen, I could not find any images of it online to include with this blog post. 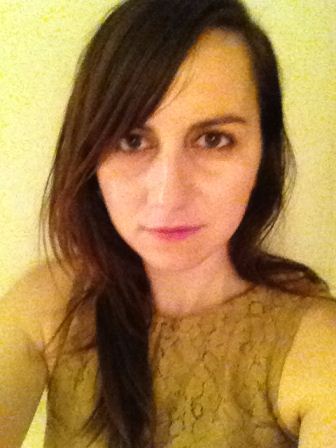 Fascinated by Zeus' insatiable lust and his willingness to impregnate mortals (often disguising himself as an animal in the process), playwright Barbara Jwanouskos decided to explore what might happen if what was good for the goose was good for the gander. The back story for her play goes something like this:

Hera is the daughter of Cronus and Rhea, which also makes her a sister to Zeus. She became his wife after he took the form of a cuckoo in order to pursue her. After Hera took pity on Zeus and held him to her breast, their marriage solidified Hera as queen of Mount Olympus. Although they had four children -- Eileithyia (goddess of childbirth), Ares (god of war), Hebe (goddess of youth) and Hephaestus (god of metallurgy) -- some claim that Hera bore Hephaestus herself out of jealousy for Zeus' birth of Athena. Hera may be the goddess of marriage and childbirth, but she has a volatile temper, is known for her jealousy towards Zeus' many mistresses, and has a tendency to act out of anger. After centuries of dealing with her husband's infidelities, Hera quits Mount Olympus to teach Zeus a lesson by showing him just how it feels to have a mortal impregnated by your spouse. 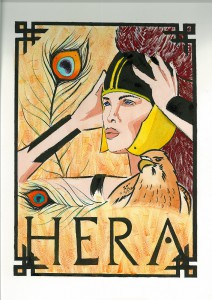 In Hera, Zeus's wife has grown sick and tired of her husband's talent for rampant procreation and decides to spend a vacation in San Francisco. Fascinated with the plethora of gourmet food trucks in Golden Gate Park (fresh crème brulée!), Hera (Claire Slattery) starts to relish her newfound freedom.

The object of her momentary affection is a clueless straight white male who is, admittedly, a stereotypical douchebag. Terry (Nick Trengove) and his high-fiving friends Chad (Ben Grubb) and Ryan (Eric Hannan) are drunkenly cruising a singles bar in the Marina District when he scores some quick action in the hallway with Hera that leads to a life-changing result.

Not only does the shocked Terry find himself pregnant, his supposedly devoted friends (who treat "bro-hood" as a sacred trust) quickly lose interest in spending time with Terry as soon as he starts suffering from morning sickness. Once Hera informs him that abortion is not an option unless he wants to lose his genitals in the process, Terry is forced to start making preparations for an unimaginable future.

Suddenly he needs the help of his next-door neighbor, Alicia (Arie Levine), a self-employed midwife and spiritual healer who has been one of Terry's occasional booty calls. Things get really complicated when Alicia (who is an animal lover) finds a stray dog bearing a name tag that identifies him as "Zeus" and brings him home. When Terry begins having contractions and Zeus wants to get in the same room with him, all hell breaks loose.

One of the more complex and interesting scripts to debut at this year's San Francisco Olympians Festival was Poseidon, or Caenis and Poseidon, by Bridgette Dutta Portman (whose appearance at the festival was delayed by a traffic jam which she attributed to the God of Highways -- "101-us"). 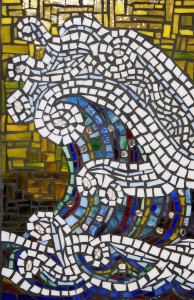 Molly Benson's mosaic for Poseidon, or Caenis and Poseidon

Like Zeus, Poseidon (Scott Leonard) -- who was married to the sea nymph Amphitrite -- has lots of sex with women (both mortal and immortal). After raping a young mortal named Caenis (Marilet Martinez), Poseidon offers to grant her one wish for anything she desires.

Obviously smarter than Poseidon anticipated, Caenis sees Poseidon's offer as her escape ticket from an unhappy life. Betrothed to the King of the Lapiths, Pirithous (Andrew Chung), for whom she feels absolutely no love, Caenis is finding it increasingly difficult to relate to her best friend, Hippodamia (Laura Domingo).

Thus, Caenis asks to be transformed into a powerful man so that she can never again be sexually violated. When Poseidon refuses, she points out other instances in which the gods have formed a key role in enabling transformations. After Poseidon changes her gender, Caenis became Caeneus. In order to fake her drowning, Caeneus leaves her bridal gown by the seashore and departs what was once her beloved home town. As the playwright explains:

I was interested in the psychology of this transgender girl: what made her wish to be a man, and how might others, including Poseidon, have felt about her transformation. In my play, I imagine Caenis as a young woman suffering from gender dysphoria. Despite her female body, she identifies and longs to be treated as male. Poseidon, for his part, embodies the very strict conception of gender roles that prevailed in ancient Greek society. He is accustomed to women accepting a subordinate station and deeply resents Caenis for her heretical transformation. I decided to base the play's structure on classical Greek drama, including the use of a chorus and verse. I like the juxtaposition of a very classically structured play with a subject highly relevant to contemporary society: gender identity and transsexualism. 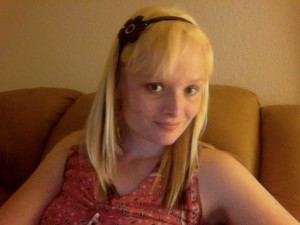 As directed by Katja Rivera, Poseidon, or Caenis and Poseidon proved to be an exceptionally well-crafted approach to explaining a woman's choice to become a man. Portman's script demonstrated the emotional consequences of her decision and how it affected those Caenis left behind (still grieving for his betrothed, Pirithous eventually married Hippodamia). Marilet Martinez brought a touching humanity to Caenis/Caeneus with Laura Domingo as her friend, Hippodamia. Jan Gilbert and Melissa Clason appeared as two meddling Nereids while Andrew Chung's Pirithous was notable for its emotional vulnerability. Sam Tillis made a brief appearance as a centaur.