Beach season is rapidly approaching, yet once again millions of people seeking relief from stressful lives will be bombarded by constant noise pollution from aerial banner planes that show no regard for public welfare. Here in Miami Beach people are subject to their relentless industrial roar year round. They use our entire community as their "bombing range." These aren't single pass-through planes or copters.

Grinding into people's heads and bones they often line up like semis in the sky one after the other and fly low overhead in a constant slow-motion loop all day, up and down the beach as well as over our back-neighborhood apartments and homes, with extremely loud engines audible from 2 miles away and unbearable overhead.

Quite honestly it's like they are stretching a miles-wide industrial anus over our heads and letting loose for hours. The only escape is to leave our own community, unlike other localized noises.

One company (the yellow planes) flies "over all of America's beaches" according to their website. They say: "When you hear an airplane you instinctively look up, " and "[a]erial advertising reaches people away from home and work, generally in an environment where they are relaxed."

So that's the very purpose. Use noise to shove ads into our faces in places people come to relax.

It is well documented the role industrial noise pollution has on stress levels and health.

Former U.S. Surgeon General William H. Steward said, "Calling noise a nuisance is like calling smog an inconvenience. Noise must be considered a hazard to the health of people everywhere."

Why should a few companies get to negatively impact millions of people with their noise pollution -- in our public spaces and our homes -- so they can make a profit?

This is not some national shared sacrifice we have all agreed to endure in order to help alleviate some great trauma, it's so they can fly ads for GEICO, nightclubs, casinos, condoms, machine gun shooting ranges, "MADE YOU LOOK" plugs for their own business, and more.

Everywhere, people feel under siege and stressed like never before. Millions of people of all incomes and races spend billions of dollars to come to the beach for restorative times with their friends, to relax, be by the ocean, have fun. Be human. Even people who come to party aren't spending their money to be under industrial assault.

Why does everything have to be polluted? It's more important than ever that people get some break. A place doesn't have to be pristine wilderness to offer people a degree of refuge. Why can't people go to the Atlantic or Pacific or Gulf of Mexico or Lake Michigan, etc. without being banged in the head for hours?

With problems everywhere, getting rid of low-hanging pollution problems should be a no-brainer. Making a city greener includes taking care of people too.

The saddest part is that this speaks to a larger problem. We have become so defiled by pollution and degradation everywhere that we simply accept life poverty and "dis-ease" as normal.

Like the Easter Island Polynesians who got used to eating rats as they lived out the remaining years of their eco-collapse, we no longer even know what it's like to have healthier places as part of our daily lives. Every part of our lives must be defiled as long as a few others can make a profit off our backs.

I asked a realtor, "Why hasn't anybody said anything here yet?" He replied, "South Florida is the trashcan of America." I disagree. It actually can be a very beautiful place. And the planes attack beaches and other outdoor places all over America.

At sundown, when the parasitic predators leave, relief floods in like white blood cells after an illness.

With climate change oncoming like weapons of mass destruction, we may lose our beaches in a few decades. But the planes are taking them from us right now.

If you come to the beach this year, after all you've been through, after how much you've looked forward to some time with friends or loved ones or to simply decompress and refresh by the ocean, but instead feel like you've just spent the day by a freeway, look up in the sky to know why. They MADE YOU LOOK.

The aerial banner planes need to 1) silence their engines to the point of inaudibility, and 2) not fly constantly over our heads for hours straight, or perhaps Miami Beach and America's other communities can ban them like Honolulu did, a case upheld by the Supreme Court. 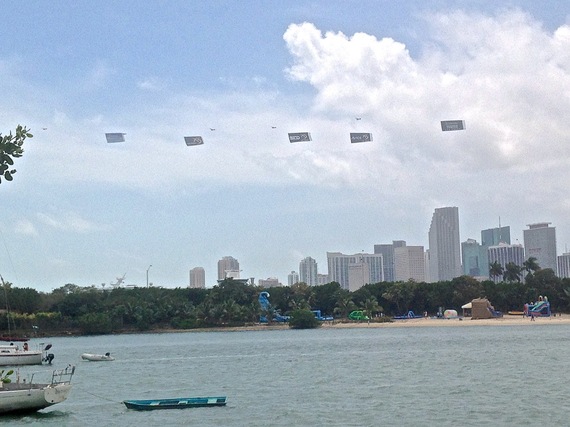