In the evolution of art fairs, the starting point seemed to be when in 1737 the Paris Salon opened to the public, which initially brought together a small fraternity of illustrious art dealers that provided strength in numbers and images. After that moment in time, these "expositions" rapidly became an important factor in determining reputation and value for the artists of the day. The British were not far behind in recognizing the importance of presenting an artistic extension of the county fair concept that had been around for centuries. In 1805, London hosted the first of two annual exhibitions. One presented new British art for sale, and the other offer works from the collections of aristocratic patrons, which lent credibility to the marketplace and provided an opportunity to attract new commissions. The 24th edition of "The Art Show," the nation's foremost fine art fair, organized by the Art Dealers Association of America (ADAA), which is celebrating its 50th anniversary this year, follows this noble tradition with style and panache, as 72 of the nation's leading art dealers and galleries showcase a variety of museum quality exhibits, ranging from cutting-edge, 21st-century works to masterpieces from the 19th and 20th centuries.

This is "art week" in an unseasonably warm Manhattan -- uptown, downtown and even above water on the West Side Piers -- with 10 individual art fairs and over 300 exhibitions. However, The Art Show, housed in the Gothic Revival-style seventh Regiment Armory on Park Avenue, is the leader of the pack and the longest running fair in America. It's no surprise that this week-long event (through March 11) is a must-see exhibition on a grand and elegant scale, where many of the art dealers are as respected and well-known as the artists they represent. Robert Mnuchin, a distinguished gentleman with an exceptional eye for perfection and the "M" in L&M Arts, observed, "I consider The Art Show and the ADAA an art institution in our city, in which I have been complimented to have the opportunity to participate all these years. This year, it is again our privilege to exhibit with a selection of vintage Baldessari works from the '70s."

David Maupin, Partner, Lehmann Maupin Gallery, says, "We're happy to be returning this year for the first time since 2009. What sets this show apart from other fairs and makes it exciting for us as exhibitors is the size and intimacy of the fair. This is a unique opportunity for a smaller group of galleries to present more focused booth presentations in an intimate ambiance. This year, we have selected a group of artists who present strong narrative in their work -- Billy Childish, Klara Kristalova and Mickalene Thomas. This venue provides the perfect environment for a thoughtfully curated exhibition."

Although The Art Show over the years is well-known for its blue chip classic and modern works on display, we've picked some contemporary images that offer a refreshing visual vitality, rich inventiveness and a literal explosion of curious subject matter:

We sent Elizabeth Sobieski, contributing editor for The Art Economist, to the informal opening gala, which benefited the Henry Street Settlement (Artist Donald Baechler, working with Cheim & Read and Pace Prints, has produced a limited edition (75) of a yellow rose with blue petals to benefit Henry Street), to get her take on the show in between sips of bubbly and while juggling a notepad and wearing a jaunty purple fedora:

I would not hesitate to advise a burgeoning art investor that he or she wouldn't go terribly wrong purchasing many of the towering works displayed by the mostly blue chip galleries at The Art Show. Who can refuse, if their pocketbook allows, a stunning, blue Kenneth Noland (Mitchell-Innes and Nash) or great Philip Gustons (McKee Gallery), or familiar and remarkable Cindy Shermans (Skarstedt Gallery), or haunting, watchful Egon Schieles at Galerie St. Etienne? Philip Pearlstein's paintings at Betty Cunningham Gallery suddenly look astoundingly fresh. Large, luminous Romare Beardens pop from the walls of DC Moore Gallery. Stills of Lassie-like collies at Luhring Augustine by the young Israeli, Elad Lassry, amuse. Ray Johnson's collages (including one referencing Chuck Close's fingernails) converse with Joseph Cornell's earlier collage work at Richard L. Feigen & Co. The faces in works by Pace's Japanese pop artist, Yoshitomo Nara, mesmerize. This year, there seem to be more videos (I felt pulled into a walking shadow by Mark Wallinger at Donald Young Gallery) and photographs than ever before; there are photo shows by John Baldessari at L&M Arts and the tragic Francesca Woodman at Marian Goodman Gallery.

Crisscrossing the well-heeled, handsome crowd, nibbling on smoked salmon fritters and caramel cheesecake, revelations could be uncovered. Not just the bubble-lettered Mel Bochners (Fraenkel Gallery), but, hidden between the timeless O'Keeffes, Serras, Thiebauds and Currins at John Berggruen Gallery, a small William T. Wiley watercolor referenced Occupy Wall Street. Most of what I see is reassuringly familiar, and very, very fine. That Alice Neel (Richard L. Feigen & Co.) looks worth every bit of its $650,000 cost. And David Wojnarowicz work at PPOW makes one wonder how this artist would have grown if he hadn't been struck down by the AIDS plague. But I feel I actually made a completely fresh discovery this night. Not a newbie, but an 80-year-old master photographer named Ray K. Metzker at Laurence Miller Gallery (and yes, I have heard his name and may have noted a work or two by this artist over the years). An entire gallery space chockablock with his black and white composite images, mostly unique arrangements shot in the '60s and '70s, but sometimes not juxtaposed and printed until much later, was outstanding in an Armory full of outstanding art. Metzker's A Maze 'N Philadelphia (shot in 1967 and printed in 1984) did Amaze in New York.

Paralleling the handsome, high quality of images was an elegant, stellar crowd at the Gala Preview that was as well-known and recognizable as the art on the walls:

CORRECTION: An earlier version of this blog post stated that the Alice Neel painting, "Portrait of Bill White," (1971) was shown at David Zwirner. It was in fact shown at Richard L. Feigen & Co. 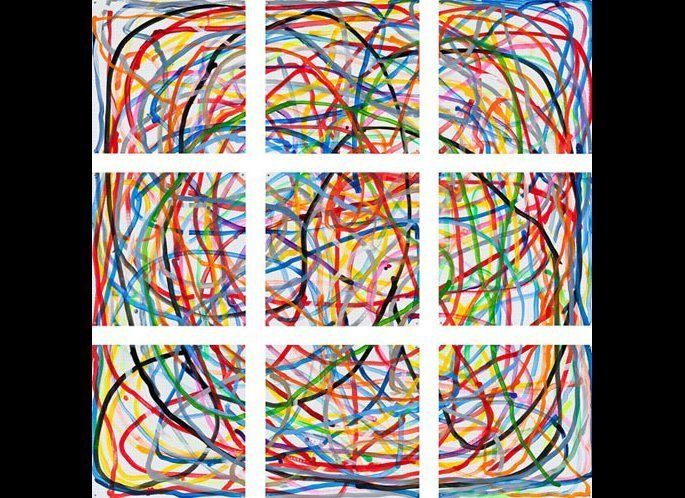 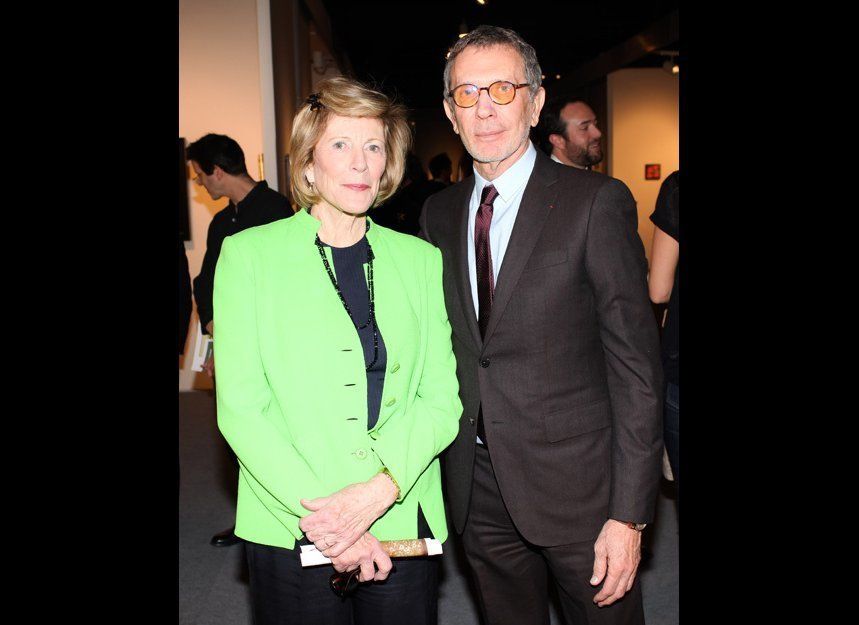