Adam Carolla, known pie-lover (link contains NSFW language, of course) and apparent podcast-haver is not happy with us. Well, is not happy with me, specifically. On an episode of Carolla's podcast this week, the host, co-host Alison Rosen and guest David Wild (both HuffPost contributors, ahem), called me an un-American, Communist, terrorist animal who drew up the "opposite of 'Schindler's List.'" Why did they attempt to make my grandmothers so proud?

This week, we published a post called "The Best Pies, In Order." It is exactly what it sounds like -- a list of pies, ranked in order from worst to best. As I said, while my views on pie don't reflect the views of The Huffington Post as a whole, Carolla deemed my ranking chocolate cream pie as number one a transgression worthy of discrediting the entire organization. Sorry, guys. But don't worry, I'm going to defend your honor.

First, here are a list of things Adam Carolla says aren't pie, because you can't just "put any f***ing thing in a pie plate and call it pie," in the order which they occurred on his podcast:

Now listen. To say that Adam Carolla is pie-lover isn't really even doing him justice. Carolla talks about pie, it seems, more than I talk about almost anything. So I take his criticism to heart and with reverence (that's the only time anyone's ever said that about Adam Carolla). In fact, let me take this moment to say all of the nice things I have to say about Adam Carolla really quickly, to get them out of the way: Adam, I think you are funnier and deserve to be significantly more famous than Jimmy Kimmel, and I think you have more integrity of mission than Dr. Drew ever will. But now, I have to prove to you just how wrong you are about pie.

In your myriad rants about why pie is better than cake, you always, always cite one particular pie outlet as the gold standard: Marie Callender's. First, I'd like to know one thing: Adam, has anyone ever made you a pie?? Have you been banished to the land of nation-wide-chain-retail pie for so long that you've forgotten that people can actually make pie with their own two hands? Second, I'd like everyone, but especially you, Adam, to take a long, hard look at Marie Callender's pie menu. 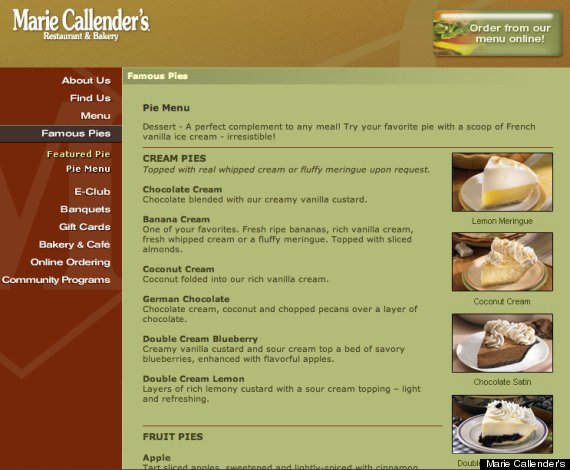 Do you see it? Do you see what is on the top of your gold standard pie list? Chocolate. Cream. Pie. And do you see, Adam, way down there at the bottom -- so far down I could barely catch it in the screenshot -- what is underneath all those cream pies? Apple pie. Or, American pie, or whatever you called it. Guess what, man, apple pie was invented in England. It's about as American as The Beatles.

Just a few more questions, Adam, and then you can head back over to Marie Callender's: what is your favorite pie? You never even ventured a counter-argument by telling us. Is it foot pie? You seem to have that in your mouth pretty frequently.

What's your beef with chocolate cream pie, when you seem to love coconut and banana cream pies? Is there a bit of pie discrimination happening here? Did you not get to hug enough pie when you were a kid? Finally, if you think lemon meringue pie is so great, why don't you find us one that doesn't suck?

If you want to hear the pie-rage in Carolla's voice for yourself, you can check out the full podcast episode (pie vitriol starts around 17:00).