Adam Mayes, a Mississippi man who committed suicide while on the run from a kidnapping and double-homicide, was infatuated with one of the young girls he abducted, according to the Tennessee Bureau of Investigation.

The revelation was made Monday during a preliminary hearing in West Tennessee for Adam Mayes' wife, Teresa Mayes, who is charged with two counts of first degree murder and two counts of especially aggravated kidnapping. She has pleaded not guilty to all charges.

During the proceeding, held at Hardeman County General Sessions Court, TBI special agent Valerie Troutt read from a statement that was allegedly given to the TBI by Teresa Mayes. In the statement, Mayes said her husband had described 12-year-old Alexandria Bain as "his new love" and said he and the girl were going to be together.

On April 27, Adam Mayes, 35, abducted Bain and her 8-year-old sister, Kyliyah, from their home. According to police, while at the house Mayes also killed Alexandria Bain’s older sister, 14-year-old Adrienne, and the girls' mother, Jo Ann.

In the statement read by Troutt, Teresa Mayes said her husband struck Jo Ann Bain with a blunt object and strangled her to death with a rope. He then smothered Adrienne Bain. During the commission of the murders, Teresa Mayes drove around with Alexandria and Kyliyah Bain, according to the statement.

When Adam Mayes joined the trio, they allegedly drove to Guntown, Miss., together with the two bodies. Mayes initial plan, according to his wife's statement, was to give the girls new identities.

"Adam mentioned that he had different dates of birth and different Social Security numbers because he said he was gonna change their identities," Teresa Mayes said in the statement.

Adam Mayes was, according to his wife, proud of what he had done.

"He mentioned that he was smarter than most criminals and would flee to Mexico without being caught," the statement said.

Adam Mayes took the bodies of the two women to his mother's home near Guntown and buried them in the backyard. He then took Alexandria and Kyliyah into a heavily wooded area nearby, police said.

The trio hid in the woods until May 10, when Mayes shot himself in the head as SWAT team members closed in on him. The two girls were found unharmed.

Teresa Mayes said that she believed the killing and kidnapping spree was triggered by Mayes' feelings for Alexandria Bain.

"I saw Adam kiss Alex on the lips and she would change clothes in front of him," she said. "It upset me but there wasn't anything I could do about it ... Adam said he couldn’t live without her and that is why Adam initiated this plan."

TBI special agent Cathy Ferguson spoke at the hearing and addressed claims that Adam Mayes thought one of the girls he had kidnapped belonged to him.

"We found no evidence to suggest that Adam was the father of any of the children," Ferguson said.

At the conclusion of the hearing, Hardeman County General Sessions Judge Chip Cary found there was enough evidence to send the case to the grand jury.

Adam Mayes' mother, Mary Frances Mayes, also appeared in court Monday on a charge of especially aggravated kidnapping. She has pleaded guilty to the charge. Like her daughter-in-law, her case was also sent to the grand jury for consideration. 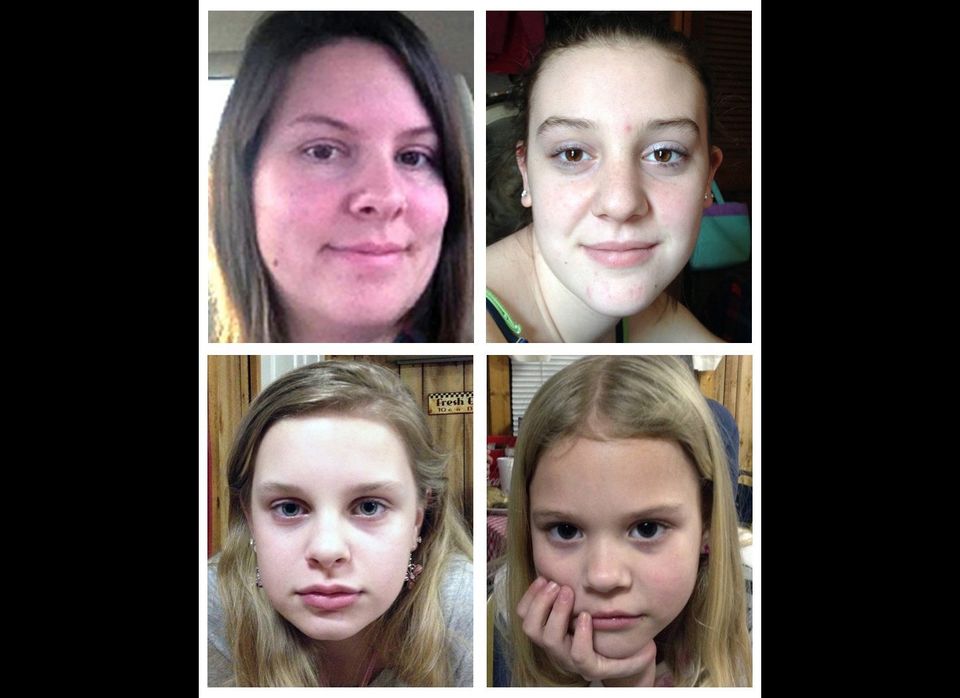 1 / 17
Jo Ann Bain and daughters
Jo Ann Bain (upper left) and her three daughters were abducted in Tennessee on April 27. The bodies of Bain and her oldest daughter were found more than a week later in Mississippi behind the home of their family friend and suspected kidnapper Adam Mayes. Police and the FBI are searching for Kyliyah (lower right), 8, and Alexandria, 12.
AP