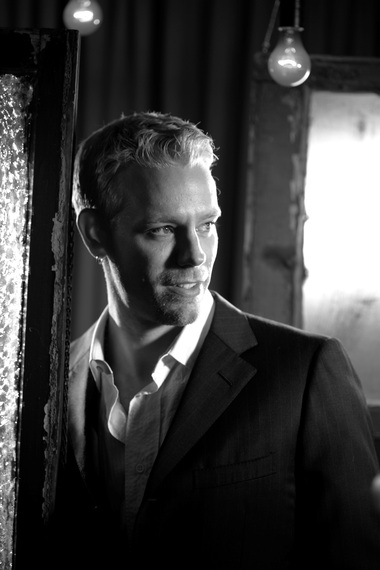 I met up with Adam Pascal at the St. James Theatre where he, along with the rest of the talented cast, welcome theatergoers to the Renaissance nightly in the tongue-in-cheek Broadway show Something Rotten. Although the Broadway show will be ending its run on January 1st, Adam, along with Rob McClure and Josh Grisetti, will be taking the show on tour. I met up with Adam Pascal in his dressing room at the theatre. He's still as good-looking as he was in his Rent days, and was introspective and thoughtful as we covered a wide variety of topics.

You live in California. Is your family still there?
Yes, it's the real bain of my existence, being separated from them. But moving back here isn't the right choice for us. We've been out there for ten years, so my kids have their lives and their friends out there. This is what I do, and I do love it. And as long as people keep responding positively to the work that I do onstage, then I'm going to strive to do it and keep getting better and expanding my perceived abilities.

What's the best part of it for you?
Feeling like I did a good job. That's why I prefer theater to camera work. You get a full complete experience; getting to the end of the story and knowing that you just entertained however many people, hopefully a full house. And you get a sense of accomplishment every day. You don't get that immediate gratification, that reaction, in film and television work as its very impersonal, and I respond to the feeling of a job well done.

This show is, in part, a spoof on Shakespeare. How you ever performed in a Shakespeare production?
No, I haven't.

Would you want to?
I don't think I would. It's not my thing. To be completely frank with you, I'm not moved by it, I don't understand the language enough to be moved by the material. So I don't strive to get to that level where I could be a Shakespearean actor. I think it needs to be in your blood. Maybe I'm too simple, but I've seen a number of Shakespearean productions and I was left feeling empty and bored. 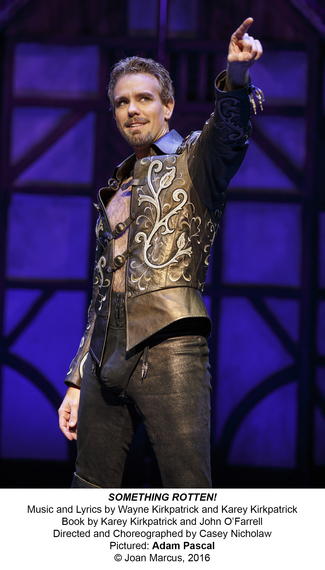 You have an accent for this role. Is that fun?
Yeah, I love it. I like to disappear as much as I can into a role. So the more makeup, the more accents, the better. That's what makes it fun, to be as far removed from me personally as I can get.

The ultimate message of the show for me was about being true to yourself. What allows you to believe in yourself?
That's a good question because I have a hard time believing in myself. Every job I get, I say "how am I here?!". I feel like an imposter. I know that I'm good at it, but I have a hard time internalizing that I'm good at it. And I feel like, at any moment, someone is going to pull back the curtain and say "aha you suck!". It's really more of a question of this being what I know how to do. I've been successful for twenty years in theater so I'm going to continue to work in theater because it's where I seem to have the most luck. And I feel incredibly lucky.

You have so many fans.
I grew up playing in rock bands. I will always be colored by the experience of, for many years, playing in empty bars and empty clubs, and what that feels like to pour out your creative soul and be ignored. So, to even acknowledge that I have fans, I feel like "wow there are actually people here." It will forever be ingrained in my mind that I will walk out there and there will be a couple of people at the bar. So I'm incredibly humbled by my fans; it's quite amazing and I'm forever thankful for them.

Do you have any kind of mantra that you live by?
Not really. I find that, if you have a mantra, you eventually break it. If you have a code of "this is how I live my life" you eventually break it. I've been sober for almost four years, and I definitely was somebody who said something and did another and I spent many years living like that. So now I just try to be good to my family and be honest and act in a way that I didn't act when I was using. I guess you have a different perspective after you go thru that kind of thing. When you risk losing everything that matters to you, and you somehow come out of it without having lost it, for me, I just try to keep my head down and live my life the way I should live it. And not talk about it or preach to other people. Because no matter what anybody told me, I had to figure it out. And so, like I said, I want to walk the path that I think I need to walk, keep my head down and stay out of other people's business. Look at the hypocrisy of this world - look at the president-elect - there's no bigger hypocrite than that.

Hamilton is such a craze and it brings me back to Rent and the phenomena surrounding it, for different reasons than Hamilton, but similar in the sense of it being a movement.
There are such strong similarities. If anything, Hamilton is a bigger phenomenon because of social media and the internet. In 1995, social media didn't exist. So our show basically was a word of mouth thing. Hamilton went nuclear much quicker because of social media. And yeah, I know some people in the show, and I've definitely watched them and was nostalgic about my experience. I was a little envious that they were able to have this type of experience without the incredibly heartbreaking loss that we endured, losing Jonathan Larson the opening night of our dress rehearsal off-Broadway. Our experience was, and always will be, colored by Jonathan dying right when this thing was taking off. I envy them not having this heaviness surrounding them, and being able to enjoy the experience without the sadness we had to deal with.

Something Rotten ends its Broadway runs January 1st. What's next for you?
Me, Rob and Josh are going out on tour. We start immediately, on Jan 10th, and the following week we officially open in Boston.

See Adam Pascal in Something Rotten on Broadway, or on tour early next year. Get tickets here.