Spending a morning tasting bourbon recipes with the Travel Channel's Adam Richman is a cross between hanging out with Tom Colicchio and a Ryan Gosling 'Hey Girl' Tumblr. It's just that fun. With the Man v. Food cable juggernaut under his belt and Best Sandwich in America now airing, Richman is in New Orleans by virtue of fan votes bringing the Red Stag Food Truck to town. He comes by with bourbon-infused dishes paired with cocktails, and starts the morning by asking if I've replaced my oven mitts with the thumbs burned through (a Twitter overshare). Yes, there are new mitts.

We start out with the obvious question: Does everyone everywhere challenge you to food dares? "It does happen quite a bit." As a fan, it's difficult to resist throwing down a food gauntlet. Last month The Guardian referred to Man v. Food as "one of the greatest TV shows of our time."

"I've also been on the flip side where a critic has something nice to say about someone else and disparaging about myself," Richman tells me. He's uncomfortable with his show being complimented at the expense of another, but both are part of the business. "Like Tom Berenger tells Charlie Sheen in Major League, "If you didn't get cut and you made the team you go celebrate in your car, celebrate when you get home but don't be jumping up and down next to a guy who just died.' I'm sure you know this working in the food space, because it's so competitive -- healthy competition is one thing, I think we left healthy a long time ago." Maybe that's what was so engaging about Man v. Food, it's a break from person v. person nature of reality shows. Even with Best Sandwich in America, the sandwiches can all get along at the end of the day. Richman produced Best Sandwich, and already has projects line up for 2013.

He's in New Orleans promoting the recipes he created for Red Stag, and appreciates the fact that Jim Beam posted his recipes as an online download. "I always hated watching cooking shows where the chef would use ingredients that I couldn't get my hands on, cooking implements that I couldn't afford, recipes that I could never have access to. I have a huge fan base in the UK and I get Tweets, emails and facebook messages of people making these things in England, which I think is pretty awesome. I needed to create dishes that could fit in different times and places." Richman followed the Bourbon trail when he lived in Louisville, Kentucky for a year, the same year his dad passed away, which he notes Freud says is the most formative year in a man's life. "It certainly was the case in mine."

A Brooklyn-born family man, Richman shows me an iphone video of his co-producer's young son talking to Richman's mother via the interwebs. He credits her cooking for inspiring his passion for food. In our talk, family is referenced as often as pop culture, from Young Frankenstein to Treme, and it all loops back to food. A self-taught chef who worked in kitchens from coast to coast after graduating with an MFA from Yale School of Drama, Richman has an ear for a line that resonates. As he brainstormed dishes for the Red Stag challenge with a friend who came up through the kitchen ranks with him. "I felt like Vince Vaughn in Swingers: You're growns up and you're growns up." Part of the growns up journey? Mardi Gras in New Orleans.

"The first Mardi Gras I went to I stayed at the Tulane AE Pi house on Broadway. Slept on a pool table one night, slept under it the next. But the boot was actually our rallying point and I got to see the magnificent Funky Meters, I was the one who knew Look-Ka Py Py, Sissy Strut, Africa. The Meters is my ish. And that was the first place I learned to eat crawdads, and have my first Dixie Beer. The fact that my food's going to be around there on any level, it does really affect me in no uncertain terms. Then we're doing d.b.a. on Frenchmen street, one of my favorite places to hear music in this whole city. I remember going into Maison for jazz, and a guy said 'go down to Frenchmen Street,' so I'm asking people, that was before GPS, and then I head the music..." The Red Stag food truck at The Boot and d.b.a. (pictured below) were a result of Facebook votes.

"Right at the end, the fans made a big push for New Orleans. There's a soul and a spirit to this city that's distinctly unlike any other and you feel it if you're open to it. Bourbon Street is what it is and I owe a nice chunk of my ages 18 to 21 to it, but it's part of but hardly indicative of the greater whole of what New Orleans is, and of what cooking is here. The standards I think for food are a lot higher. It's the confluence of a lot of cultures, if you look at Creole tradition and you look at Taino Indian, the Caribbean influence, the African influence, South American Andalusian influences. Then you look at what you have in an agrarian aspect with tidal marshes, tide pools, the gulf, the proximity of gulf coast seafood, the proximity of river fish, catfish, redfish..."

Richman is the opposite of a newcomer to New Orleans food and culture. He's been here for Man v. Food's astonishing 15 dozen oysters at Acme Oyster House, debris at Mother's Restaurant and shooting for Best Sandwich in America, but also to research his upcoming book: "Quest for the Best." "It's about the iconic dish each city is known for, so down here in New Orleans it was best shrimp and oyster po-boy, best New England clam chowder in Boston, best key lime pie in Key West, best deep dish in Chicago. He's finished best bagel in Brooklyn, and still ahead are fish tacos in San Diego, best steak in Dallas." This is the part where the green bile of envy rises, but it subsides when Richman says that out of every dish he feels qualified to review, gumbo is an exception.

"I know that gumbo is an inexorable part of life here, but I feel that with my cooking experience - I get sandwich construction infinitely more than I do gumbo. Gumbo is so sacrosanct and so much part of the double helix of someone's DNA down here." He lived in Montgomery Alabama, and "it's amazing how much of the cuisine from here has made its way down there." But judging nuances he leaves to the locals.

"For people to come down here and think it's just about Mardi Gras, beads and breasts and whatever else and completely lose sight of the confluence of all these cultures and to know how many firsts have happened for the African American community here. How many firsts have happened for the Native American community here. I get goosebumps remembering the first time I got pulled into a second line and someone handed me a handkerchief." My husband tells him about "Uncle" Lionel Batiste passing, and the many second lines to come and he reflects on the spirit of the people.

"You think about the past 10 years and what the city's been through on every level; Katrina, the economy, the pluses of the Saints, the minuses of the Saints, what happened in the Gulf, I think there's this profoundly indomitable spirit. It's like this wall (*our wall has the crumbles). It's absolutely gorgeous and completely real. I find local accents still to be absolutely hypnotic. I love when you hear baby pronounced 'Bueeehhbey.' That still just does it to me. I love the architecture here, I've killed many a camera battery just in one cemetery. I love that everything tells a story. I love that the food tells a story, the music tells a story. My bracelet from Marie Laveau's that I got years ago still tells a story.

"This city is something that's so ancient and so immediate at the same time. I think that's very true of the food too. People are still making their TeTe Danielle's gumbo with sassafras file. There's something really hypnotic and poetic and gorgeous about this place. I never have enough time here. I used to visit my friend Bobby McCray who played for the Saints, I still don't know why he hasn't been signed yet." We yell 'Sign Bobby!' into the recorder, as Drew is safely signed. What New Orleans has given Richman, he's given back by causing a run on local ingredients.

"When I was down here doing my po-boy research for Quest for the Best, Domilise's won the region in Best Sandwich in America. Man Versus Food was so big and brought 60 to 90 percent more business for most of those places. Domilise's has been on Annunciation Street since time immemorial. I went in there and they're hugging me and kissing me." Owner Dorothy Domilise told him, "Oh my God you called Josh a chef. He's not a chef, he's my son, but he makes a good po-boy." And so we're laughing and the mom said to me, 'I want to tell you something, in all the years of this restaurant we have never run out of anything. We ran out of shrimp for the first time in our entire existence. We went from ordering 250 pounds of shrimp a week to 600 within one week of that show.'"

His po-boy research for the show and the book took him everywhere from Russell's Short Stop in Metairie, R & O's, Mahony's, Johnny's in Fat City. "We went by the Superdome, that glorious shining glittering Tylenol, and I said: God, it's stunning. The driver looked over his shoulder and said, 'That's our church. That's where we go to worship our Saints.' How do you not love that? It's like a Tartuffe of architecture."

We step into the garden with Red Stag cocktails. It's just after 9 am but when in Rome, you drink with Man v. Food every time you get the chance. He shares a favorite television chef memory: "Back in the day, I used to watch The Cajun Chef with Justin Wilson. His mixing would go one way and his stomach would go the other. He told a joke: "The neighbor had a baby, but they're not so smart. I was worried about what they were going to name the child. They said they named her Denise. 'Denise that's a lovely name. I'm impressed by such a pretty name. What did you name the son?' 'Denephew.'"

"I always loved the fact that on his show he wouldn't feed people, he would just eat it all himself." With that, Richman heads off to his next appointment. And for the record, he shared. 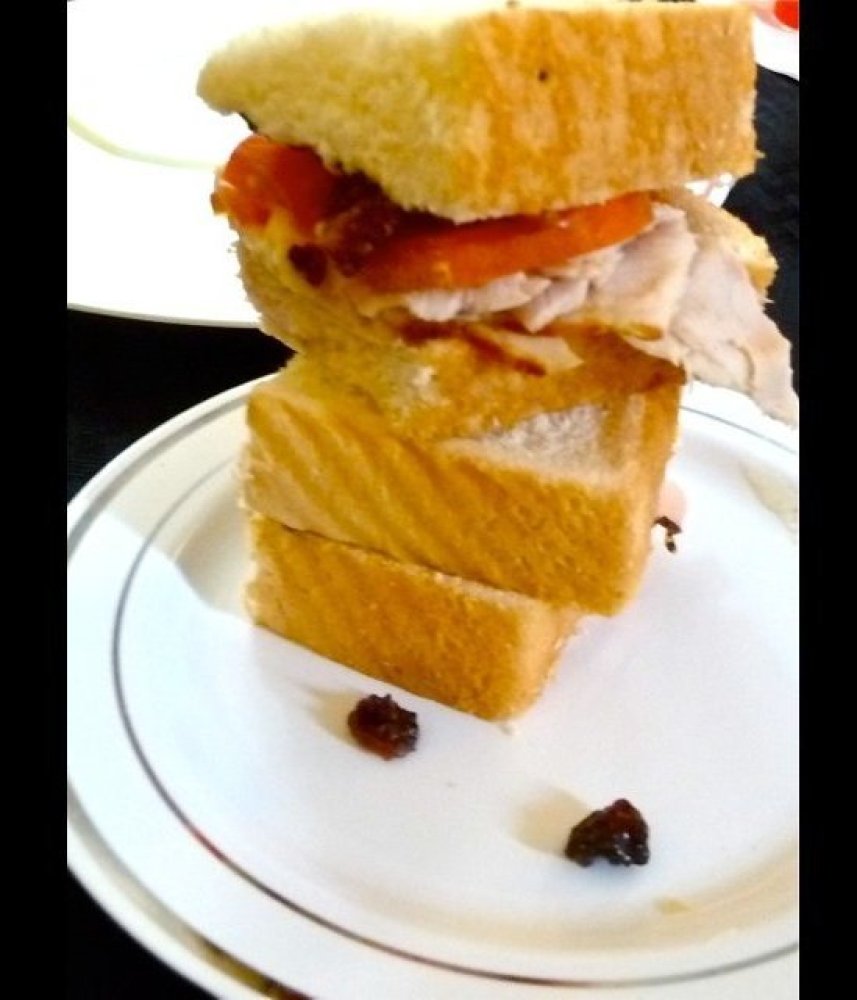 1 / 7
Bluegrass Honey Tea Sliders
<a href="https://apps.facebook.com/red-stag/?tab=2" target="_hplink">BLUEGRASS HONEY TEA SLIDERS</a>. “This is my homage to the Louisville hot brown. The hot brown is one of those stick to your ribs, your spine, your femur kind of dishes, but it's delicious. It's from the Brown hotel. The Bluegrass Slider is turkey breast, unsalted organic butter, thick cut bacon soaked in honey tea bourbon, light brown sugar, I candied the bacon. added Mornay sauce, Honey Tea Bourbon infused turkey on Texas Toast.” - Adam Richman