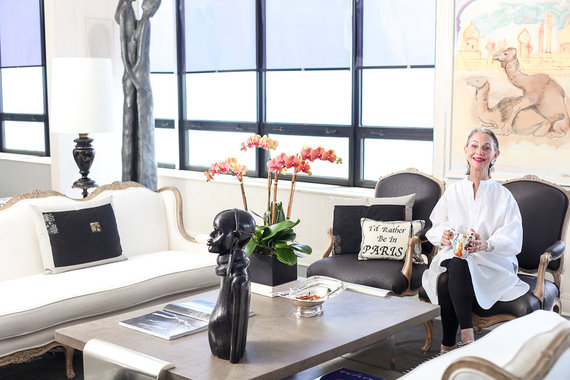 Our American Airlines flight roared up into the sky over the California mountain tops, its large body seemingly out of control.

The plane banked far left and then far right, several times, rocking back and forth, then leapt up into the sky and then, seemed to be falling to the earth. Fortunately, after a time, the plane's path leveled off.

I could sense the distress of other passengers as I sat alone in row 26, without my Ultimate Concierge, Shelly. Gratefully, I was feeling 'as cool as a cucumber,' thinking to myself, 'whatever will be will be.'

Why was I so cool? For starters, I am an educated traveler and I know turbulence is not dangerous.

Plus, I was so exhausted and taxed from events that took place at home and on the plane before take-off.

What ultimately saved me from an emotional meltdown is my resiliency and the importance of being able to adapt positively to the unknown.

'Our bags were packed and ready to go.' Shelly and I were looking forward to our trip to the city of Nice, France via Dallas then London.

It was early morning when we received an unexpected phone call that created what we could have allowed to become unbearable havoc.

I picked up the phone and answered with my regular, "Good morning!"

An American Airlines recording was on the other end of the line announcing that our flight from Palm Springs to Dallas was cancelled due to poor weather. My husband, the consummate experienced and calm headed traveler, got on the phone with AA. The bad news: We would be delayed a day and have to rebook the entire trip. This was not good. My husband had an important business meeting in Nice.

After a long conversation, Shelly gave me an alternative: There was another flight out of Palm Springs through Chicago instead of Dallas, on to London and into Nice. We could catch that flight if we left our home in 20 minutes! The bad news: It was early morning and I was not dressed.

As I stood next to my husband in my nightgown and robe, I blurted out, "Twenty minutes! I have not even showered!"

"No time to," Shelly replied, "If you want to wake up in London in the morning."

I was absolutely beyond flustered and aggravated though I realized I had to be a good sport because Shelly had a meeting.

So, hurriedly, unhappily and even trembling, I washed my face, brushed my teeth, put on my sunblock and moisturizer, some blush and red lipstick, spritzed myself with my favorite perfume, ran a comb through my hair, threw on my clothes, kissed Orchid good-bye and rushed outside to the car holding a fresh cup of coffee in one hand, my laptop, winter coat and handbag in another.

Trying to smile, I said to Shelly, "I made it!"

"I never doubted you for a minute," he replied, laughing.

What choice did I have, dear readers? What would you have done? I doubt you would let your husband miss a meeting over a shower! At least I hope you would rise to the occasion with positivity.

I could have ranted, raved and stomped my feet -- like I wanted to -- but what would that accomplish? Instead, I took a deep breath (disguised as a sigh), because I learned breathing is healthy, and got my act together, big time.

I must admit, I walked into the Palm Springs airport feeling somewhat flustered but being a very experienced traveler, I knew there could be more bedlam ahead, so I stayed calm and was prepared to wait.

Shelly changed our tickets, and we then found out we lost our first class seats on the first leg of our trip and the hardest part, for me to digest, there were no seats together on the flight to Chicago. Things were going from bad to worse. What I did not know: This was just the beginning!

We boarded our flight. Shelly took the aisle seat in row seven at my insistence. I found my seat in the back of the plane on the aisle and sighed -- I mean, took a deep breath -- as I plopped down... stressed to the nines!

Our flight wound up taking off later than planned because of an incident that I found myself smack dab in the middle of.

A young couple was traveling with their two small daughters. The mother and two little ones were sitting across the aisle from me and the father was sitting in the middle seat next to me.

All of a sudden a flight attendant appeared to tell the young mother her children could not sit in their car seats. A yelling match began when the father stood up next to me in his seat and demanded to see an AA supervisor. A supervisor was called to the scene!

I was in the middle of the two of them. This was followed by words I could not make out. Suddenly, out of nowhere, passengers started playing musical chairs!

The mother moved with one child and the car seat into the row ahead of where she had been sitting and the father moved from the middle seat next to me to the row alongside me with the other child and her car seat. That meant that two of the passengers sitting in the front row had to move; one back a row and the other one next to me! In order to give all these people more room to move, I moved out of my aisle seat into the father's middle seat.

This is how I ended up on an American Airlines flight, with maddening turbulence, between two large male strangers, no husband and no shower, on my way to Chicago instead of Dallas, on the first leg of our journey to France!

I was, in truth, put to the test and, of course, I survived. I owe this to having a flexible attitude and knowledge learned over the years. It takes skill to become an adaptable woman. You must be flexible, cooperative and accommodating. It is a virtue... and it takes a lot of discipline.

So how did I put today into perspective? I decided to think of it as a comedy of errors. I adapted to each curve ball. It is all about our attitude dear readers. Remember this: When life throws you a lemon... make lemonade.

By forsaking my delicious warm shower, Shelly will make his meeting and together we will reap the joy of spending time in France and after, in London.

Allowing a man to take my aisle seat made him happy and that makes me genuinely happy.

Two passengers adjusted to a bad situation and adapted in a positive way when they gave up their seats to help a young family.

In fact, in all there were eight people on that AA flight that could have been very unhappy.

Instead, we all chose to adapt, even my husband, Shelly, seated in row seven, who made the trip back to row 26 at least five times during the flight to see if I was alright.

And, of course, I was. Because I know that while I can't stop the waves, I can learn how to surf. Can you?

PHOTO GALLERY
What Have You Stopped Stressing About?
Download
Calling all HuffPost superfans!
Sign up for membership to become a founding member and help shape HuffPost's next chapter
Join HuffPost

How To Adapt And Even Thrive When Things Go Horribly Wrong
What Have You Stopped Stressing About?