And these drugs, like Adderall, Ritalin, and Concerta, aren’t cheap. Sales of prescription stimulants reached almost $9 billion last year in the US alone, according to data from healthcare technology and information company IMS Health. They have more than quintupled since 2002. 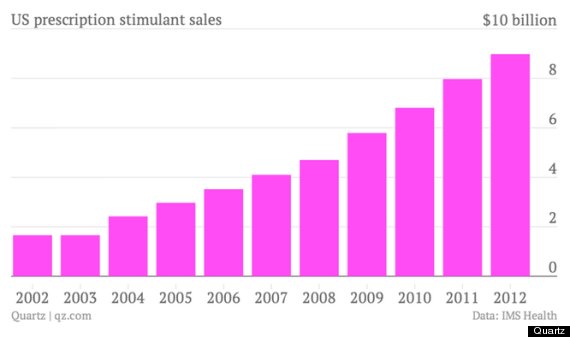 “The numbers make it look like an epidemic,” psychologist and Duke professor Dr. Conners told the Times. The thrust of the paper’s report is that the rise of Adderall and drugs like it has much to do not with an increase in the number of kids with ADHD but with the lengths to which Big Pharma has gone to market the drugs, targeting first children, and now increasingly adults, effectively turning the disorder into a more loosely diagnosed affliction that brings in billions of dollars in revenue every year.

And it isn’t only a problem in the US, but in many countries in the world, according to a report in 2009 from the International Narcotics Control Board: 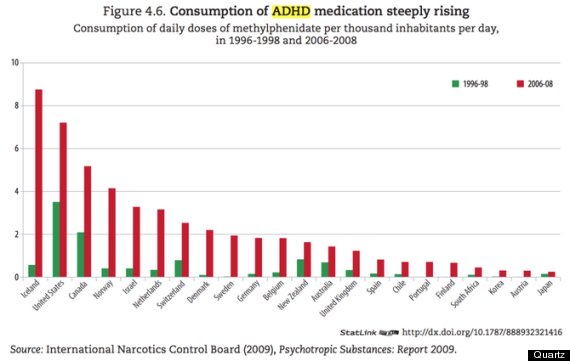 More From Quartz:
-- Why you should move all your meetings to Jan. 7
-- Gather ’round, children, here’s how to heal a wounded economy
-- 70% of people would be willing to have a smart toilet share their personal data
-- How the “internet of things” will replace the web

1 / 12
1. Smoking-related health conditions are a <a href="http://www.cdc.gov/tobacco/data_statistics/fact_sheets/health_effects/effects_cig_smoking/" target="_blank">leading cause of death in the United States</a>, accounting for nearly one of every five deaths annually. Source: <a href="http://www.cdc.gov/tobacco/data_statistics/fact_sheets/health_effects/effects_cig_smoking/" target="_blank">The Centers For Disease Control</a>
Getty Images