You're waiting in line. Enter: your phone.

You're in an awkward social situation. Enter: your phone.

You're at home - bored, alone. Enter: your computer.

Many of us have been there, so if these scenarios sound familiar, know that you are far from alone. It's easy for such rituals to become prominent in our lives; one study found that social media is more addictive than alcohol and cigarettes.

For all the positives of social media, there's a flip side. Addiction to it can lead to over-stimulation, cause anxiety and stress, damage relationships, and even threaten the family unit.

Author and illustrator Gemini Adams speaks to such issues with humor in her upcoming book "The Facebook Diet," which is to be released in April. She uses cartoons to depict 50 signs you might be addicted to Facebook and offers suggestions on breaking the addiction.

"If you can see something that makes you laugh, but also see yourself in it, it makes it easier to cope with," she told me on her decision to use humor on the important topic. 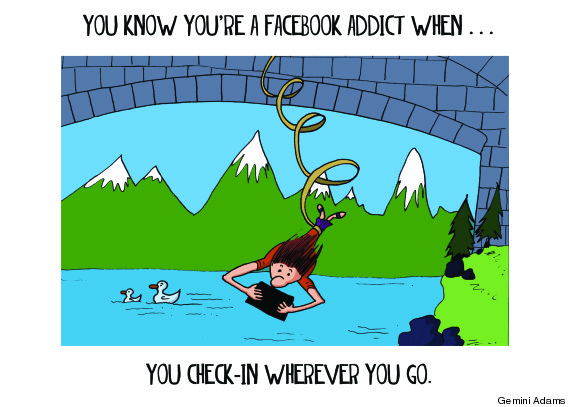 A native of England, she was following her friends and family's lives back home, while living in a major U.S. city, Los Angeles.

"As is often the case in major cities these days, it's a very transient place. Three-quarters of my social group moved away for various reasons, and I found myself alone," she said.

She got more and more into Facebook to stay up-to-date with friends who weren't close geographically. She said she would have it on the screen often, "dipping in and out pretty much all day long."

One day, she had a major realization. She was spending way too much time on Facebook. It was sucking up her freedom and that made her feel uncomfortable. She wasn't going out to make new friends, in the physical world, to fill the void for the ones who left.

"I made a life choice to stop spending so much time on Facebook, start going out and finding new social groups to interact with physically," she said.

She also developed a love for nature, removed from the rapid-paced modern world. Inspired by the book "Your Brain On Nature," she would go out in the wilderness with no temptations to "check in" on Facebook because there wasn't even reception.

Adams said the Web is constant, always on, and sometimes there's a sense that if you're not active on it, people will forget about you, or not even know who you are.

"We have things like Klout, measuring our online reach, how effective we are on social media," she said. "There's a false illusion we have to have online reach." 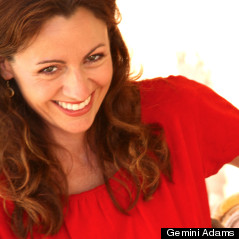 She admits that as an author she has to do a certain amount of social media. But in the process, she realized something.

"I just realized it's not really real," she said. "For me, I'd prefer to do something more real, going into the world and doing something with groups of people, having real life experiences. Building my platform and building my reach that way, recognizing the value of human interaction."

The lack of that physical, in-person interaction can be dangerous, Adams said. When you communicate online, there's no body language and there's no tone. That can lead to misunderstandings.

"The wilderness gave me the ability to remember that, and makes choices on how I communicate with people in the real world," she said.

Without all the technological distractions, life becomes simple. Adams said she experienced that while living in Africa in her 20's, which she calls probably "the happiest" time in her life.

"It's about quality time with great people. We made up our own entertainment, whether singing around a campfire, singing songs, playing a silly game or cooking together," she said.

"I sort of tapped back into that recently and realized the value of that sense of social community instead of keeping up with our 2,000 friends on Facebook," she said.

You don't even have to be with other people. Time alone, and yet away from Facebook, can be good too, she said. Find a quiet place, reflect, write, relax. As an example, Adams said she did the illustrations for her book while sitting in her garden, alone.

"My husband complains you don't answer your phone, and I'm like, nope, I was focusing on one thing, and it was really blissful," she said.

In doing research for her book, keeping up on the latest studies about Facebook addiction and from her own personal experience, Adams said she's learned about several ways that addiction can affect us. Here are some of those ways she outlined during our conversation:

2. Over-activity: "As a society, we are spending more time on screens overall. It's having a huge impact on our stress response system. We're sort of over-activated all the time."

3. Lack of concentration:: "It's affecting our ability to concentrate. We're more prone to disruptions. It can lead to angry behavior."

4. More stress:: "It raises our levels of hypertension and likely some sort of inflammatory disorder. It lowers our emotional intelligence."

6. Losing sense of reality: "It undermines our satisfaction with life in general and can lead to depression in life."

7. Physical impact: "Physically, when you're sitting looking at a device, it affects the biological makeup of our body. We're hunched over, we're feeling lower, and we're less infused on life."

8. Loss of free time: "The time drain obviously has an impact too because we have less time to do things that will build us up, whether physical activity or spending time with loved ones."

To avoid such issues, Adams encourages people to establish digital boundaries, set time aside for Facebook but make plenty of time for other activities. Even consider taking a break from Facebook altogether.

She hopes that through her book, people will become more aware how they're using technology and re-evaluate their relationship with it.

She asked, "Is technology something they're utilizing or is it really using them?"