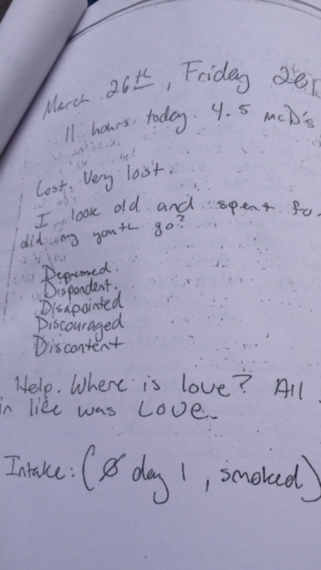 The topics of religion and politics are off limits when at a dinner party according to social advisors, but they are often discussed whether or not they start a war, end a friendship or make you skip dessert. However, there are other topics that seem even more taboo because regardless of your nationality or creed, discussing addiction and death are (pardon the pun) buzz killers. Why? The brave people at The Biscuit Factory have chosen these topics for their latest production "Written Off: The Short, Sad, Beautiful Life of Matt Edwards." I spoke with Molly Hermann of The Biscuit Factory to find out more about the project:

EP: This is a heavy topic and certainly not something I would expect to be an easy undertaking. What is the inspiration behind telling this story?

MH: It is a tough topic -- but it's impacting so many people that it actually feels good to do something about it. My cousin died of a heroin overdose 15 years ago, but I'd always thought of what happened to her as like being struck by lightning -- horrible and tragic, but rare. About six months ago I read an article about two kids, both heroin addicts, from the town where I went to high school. One of them had died of an overdose and the other was barely surviving. That made me realize that the lightning was striking everywhere.

EP: Why is important to tell the story of Matt Edwards when this scenario has been played out with so many lost lives?

MH: You are right, Matt's story -- sadly -- isn't unique. What makes it important to share are the incredibly candid journals he left behind. Like a lot of addicts, his life was a big web of secrets and lies, but he told the truth on paper. He even chronicled his daily drug intake.

EP: Matt's mother has a beautiful posting on social media describing her son and his voice. She believes Matt would like to say one more thing. How closely have you worked with her and how is The Biscuit Factory interpreting this to make his statement?

MH: I know Matt was an incredible person because of Jane -- she can do absolutely anything. She built her own house, she hunts deer -- but she wasn't able to save her own son. Matt's journals reveal his constant struggle to get clean and make something of his life. He left them to Jane and she shared them with us -- I think we all want his voice to be heard.

EP: You have a Kickstarter campaign to complete funding for the project. Why is this necessary and what other fundraising initiatives are in the works?

MH: We've funded the shooting ourselves, but we really need Kickstarter to help us finish it. We don't want it to take a couple of years while we scrape the money together. This is a story that needs to be told now -- or yesterday.

EP: Madonna was recently quoted by David Blaine in Interview magazine as saying, "I mean, I tried everything once, but as soon as I was high, I spent my time drinking tons of water to get it out of my system." This quote is interesting because she speaks of taking control of the experience, seeking a cleanse and redemption. With Matt ultimately dying from his experience, how will you offer hope to those who watch this and are currently using?

MH: Matt got his first high from pain pills that were legitimately prescribed for him but eventually started taking them recreationally. I think like a lot of young guys he felt pretty invincible and didn't know anything about the way that opiates rewire your brain. If you do enough of them you lose your ability to be happy on your own. He ended up in a place where even though he knew it was ruining his life, he was unable to get it out of his system. Like any disease, you can't just cure yourself.

EP: Creating content that will resonate with an audience and continue to live where others have died is not easy. What are your expectations from creating this documentary and where do you see it living?

MH: We'd like it to be seen by as many people as possible so we are going to get it out there on the festival circuit and hopefully we'll find a good broadcast partner, but we also plan to share it with people on the front lines. There are hundreds of organizations trying to fight the opiate epidemic in the U.S. -- lots of them founded by parents like Jane who have lost a child.

EP: For a project where we know the outcome, how do you expect to keep the story engaging? I immediately think of Sean Penn working on Into the Wild or Mike Figgis with Leaving Las Vegas -- both sad stories that take you on a journey into the mind and build compassion for the subject but find humor.

MH: That's an interesting question -- actually I think Matt was a little bit like Nick Cage's character in "Leaving Las Vegas" in the sense that he did a whole lot of awful, questionable and self-destructive things fueled by addiction. Matt's story is a roller coaster of crazy behavior and lies, but it's not just a film about his downward spiral. It's about his loved ones -- his mom, his girlfriend and his best friend -- using his journals to sort out the lies from the truth. If you can separate the drugs from the person you are on your way to understanding addiction.

EP: Where many conversations are now anonymous because of social media and people say the harshest things possible. There are definitely going to be remarks and criticism that this story would not be told if he were not white or because he did not fit the marketed stereotype of a drug addict. How will you make this story inclusive and erase all the divisive lines of race, gender, wealth, etc?

MH: This is a big problem that could impact any kid. You get offered a pill at a party and you figure it's safe because it's a prescription. You like it, you try it a few more times, and eventually you figure out you need it to feel OK. Then, like Matt, your tolerance builds up or your connection disappears or you can't afford to buy expensive opioids on the street and you turn to heroin because it's a lot cheaper and easier to get. It's a common progression -- from a pill to IV heroin use -- that needs to be understood, no matter who you are. It's killing a ton of kids. Matt wasn't your typical rich kid teenage addict -- he worked at Pizza Hut, McDonald's and Walmart. He came from a loving, educated family, but lived in a rural town so small that it didn't even have a store. I think a lot of Americans will be able to relate to his story.

EP: Sometimes when I hear statistics or a message is too preachy, I lose my focus and get lost in the facts. What medical professionals have been consulted and how technical will your story be? Is this an individual story that is being told or a public awareness segment?

MH: There is a lot of great information out there on opiate addiction. Our goal for Written Off is to tell a personal story that does more than just shine a light on the issue. We want it to help people understand the actual dynamics of opiate addiction. How is it to be inside it? How does it impact the people who love you? What were all those little clues that no one noticed at the time?

We do take accuracy very seriously, we come from a background of working with National Geographic and Smithsonian networks. For this one we will be working with an advisory panel of experts.

EP: I think what you are doing is amazing and the more content that is created on the subject of addiction and death the better. There are so many times that I have had questions around the topics and find people tend to shut down. It's not like anyone should feel like they have all the answers or pass judgement but if we can't talk about it; are the losses in vain?