The collapse of bee colonies around the world has received much publicity lately. It is a trend with alarming implications given bees' crucial role in pollinating many agricultural crops, and some researchers have attributed it, at least in part, to widespread use of a class of pesticides called neonicotinoids. These are chemically related to nicotine, and they are thought to challenge the health of bee colonies by impairing bees' ability to learn and navigate as well as impairing their motor functioning. Recent research now suggests that bees may be preferentially drawn to foods laced with these pesticides as a result of reward mechanisms. It is a fascinating lesson in how knowledge gleaned from one area of science -- in this case addiction science -- can inform our understanding of a global ecological crisis. 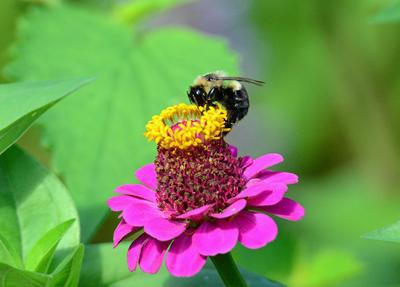 Nicotinic acetylcholine receptors are found throughout the bee brain, including in areas called "mushroom bodies" essential for memory and learning. When administered chronically, neonicotinoid chemicals are known from previous research to impair olfactory learning and memory in some bees. In this study, bees preferred the neonicotinoid-laced nectar but ate less food overall; bees faced with a choice between untainted nectar and nectar with a high concentration of neonicotinoid chemicals still preferred the latter, even though a high proportion died. The authors of the study suggest that these chemicals not only affect the foraging bees collecting nectar but are also brought back to the hive to affect the entire colony.

We are all too familiar with the disruptive effects of nicotine in human beings. Smokers may have terrible difficulty giving up cigarettes even though they consciously know that tar and other chemicals in tobacco smoke are harming their health and potentially shortening their lives. The Nature study suggests that preference for a health-damaging substance as a result of brain reward mechanisms may be a phenomenon with relevance to other important areas than human health.

More research will be needed to establish this connection, of course. Although the USDA and other organizations have linked neonicotinoid pesticides to colony collapse, and some of these chemicals were temporarily banned in Europe pending further study, the extent of their role remains a matter of controversy. Also, the finding on bees' preference for pesticide-laced foods will need replication and further examination. But it suggests a surprising way that addiction science might prove relevant to understanding animal behavior outside the laboratory, behavior that has major impact on our economy and food supply.