Imagine a progressive political organization puts out a TV attack ad that's creating buzz and getting people talking. What distinguishes the target in question, the ad's voice-over asks? Could someone else be as stupid, as clumsy, as lazy, as ugly and sluggish as this horrible person? Perhaps a "retard!" In fact, let's make this a game. Let's go up to people on the street, hold up signs that describe harmful actions, and ask people: Did a "retard" do this, or did the target?

Towards the end of the ad, a man holds up a printed sign: "Bad at math, can't feed oneself, flat foreheaded, misaligned eyes, afraid of loud noises..." Onlookers laugh - it could be the attack ad's target, or it could be the "retard."

Horrifying, right? Sadly, this isn't hypothetical, although the vulnerable group exploited in a real-life ad that one progressive political organization just released is not the mentally challenged but, instead, those struggling with substance abuse and addiction.

The ad by the group, Courage Campaign, aims to get viewers to vote against California's Prop. 32, an initiative that would restrict the power of labor unions, by highlighting actions taken by two of the measure's major donors, Charles and David Koch (the infamous Koch Brothers).

In the ad, a voice-over poses the question, what distinguishes the Koch Brothers? Could someone else be as greedy, secretive, and megalomaniacal? Perhaps "My Cokehead Brother!" In fact, let's make this a game. Folks on the street respond to a host holding signs with questions like, "Who stole oil from U.S. land and lied about it over 24,000 times?" and "Who stole Mom's purse and puked on the cat?" Did "My Cokehead Brother" do this, or did the Koch Brothers?

Towards the end of the ad, a man holds up a printed sign: "Always lying, desperately needs money, pale, bags under eyes, paranoid the government is after them..." Onlookers laugh - it could be the Koch Brothers, or it could be "My Cokehead Brother." The ad's host proclaims, "Every year my 'cokehead' brother ruins Christmas."

This is quite jarring, as progressives typically proudly identify as on the cutting edge of issues of human rights, equality, social justice, inclusion and ending stigmatization of marginalized communities. How could an organization allegedly committed to working against hate release something so hateful on National Day Without Stigma and then promote it on World Mental Health Day? Does the advocacy community have its own internal stigma problems? How could Courage Campaign so cruelly joke about "cokeheads" ruining Christmases?

Both of us (Denise and Katharine) have lost loved ones to addiction. For us and our friends and families, a loved one won't ruin Christmas this year, but the lingering impact of their fatal illnesses will. Denise's son Jeff lost his 12-year battle with addiction in 2008, and he won't be here for Christmas, because he's dead. There is nothing Denise would like more than to spend Christmas with her precious son 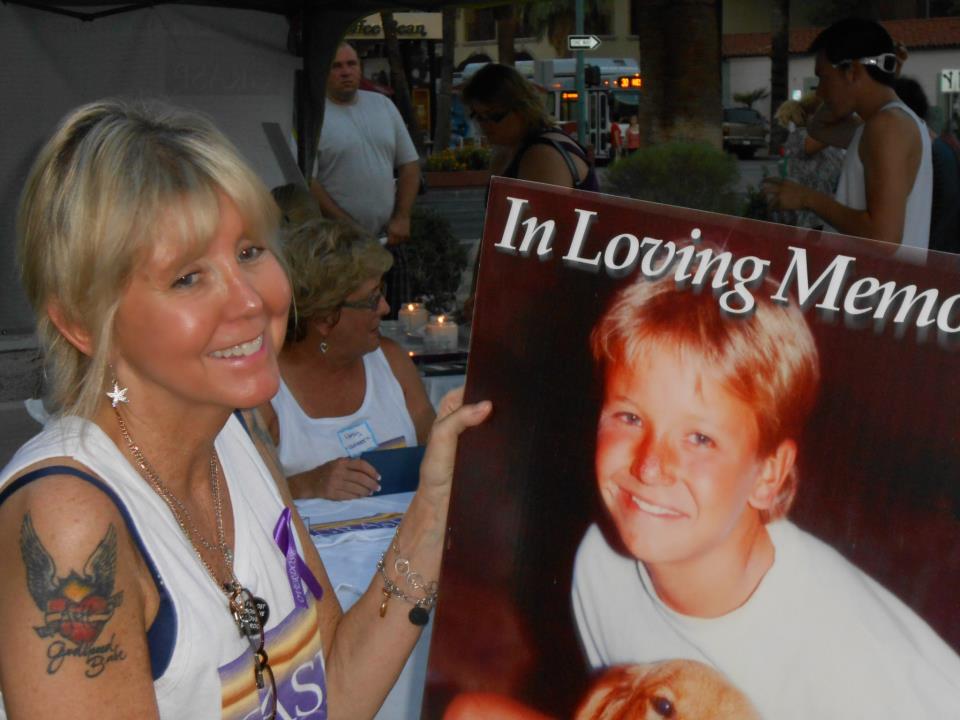 As should have been expected, the ad alienated potential supporters. Those in recovery, their loved ones and allies took to Courage Campaign's Facebook page to call for the ad's removal.

Us advocates for drug policy reform, harm reduction and recovery are not too politically correct for satire. The role of comedians is to push boundaries by making us uncomfortable by poking fun. However, the role of the comedian is different than the role of a not-for-profit committed to protecting equality and human rights of marginalized communities. Additionally, as Julia Peterson points out on Courage Campaign's Facebook page, "You can't throw some random group under the bus and call it political satire... Satire isn't offensive because it targets the same injustice it seems to be mocking."

Her follow up post, a video excerpt from The Wizard of Oz draws an appropriate parallel between the Courage Campaign and the Cowardly Lion. Dorothy exclaims, "When you go around picking on things weaker than you are, why, you're nothing but a great big coward!" to which the Cowardly Lion replies, "You're right, I am a coward. I haven't got any courage at all."

But, despite dozens of angry comments from former and would-be supporters, a Change.org petition, as well as the fact that their ad now has more dislikes than likes on YouTube, Courage Campaign says they're not taking the ad down.

There are only two scenarios that could explain refusal to remove the ad:

Perhaps they are aware of our pain -- of the struggles families and friends go through to affirm the survival and dignity of our loved ones, and they are continuing with the ad campaign anyway, because they don't care, and they think it's funny that Denise has to suffer through lonely Christmases.

We are going to assume that Courage Campaign does not think it's funny that Denise and her family find so much pain in a Christmas without Jeff that they choose to no longer celebrate it, which leaves only one possible explanation:

Like too many in all parts of modern society, Courage Campaign holds outdated, dehumanizing, and simplistic views on what it means to be someone who struggles with substance abuse, and are merely oblivious to the depth of their disrespect. That makes this a teachable moment.

But perhaps more importantly, in looking forward, perpetuating stigma perpetuates more death. Stigma is part of what killed our loved ones in the first place. Jeff was the happiest, funniest, brightest kid and young man, but his inability to conquer his illness left him with self-loathing, and shame. Denise doubts her son would have felt those feelings if he had struggled with a more accepted, however devastating, disease like cancer. Later, in his hopelessness, he would often fall into using the language of those judging him, saying he was "just an addict," though he never hurt anyone but himself in his life. During a particularly difficult time, toward the end of Jeff's life, while in a detox center he said, "Mom, maybe everyone would be better off without me." He loved life, smiled and made everyone happy no matter what he was going through. This was stigma talking, and it was devastating for Denise to hear.

It is the wildly inaccurate perception that our loved ones like Jeff are subhuman, fundamentally dishonest and depraved, hopeless and full of malice, that hurts their recoveries in the polling booth, at legislators' desks and in private moments looking in the mirror. Someone working to recover from addiction is constantly faced with questions: "Is this worth it, does society value me, does society see me as human, or does society see not just my illness, but me -- fundamentally -- as a disease? Do I need to heal from my disease, or does society need to heal from the disease that is me?"

The wrong answers to those questions have a death toll, and with ads like the one Courage Campaign insists on keeping up, society tells addicts and their loves ones that addicts, not addiction, are bad.

You may have hurt us, Courage Campaign. But we are here for you. We will help you understand the harms of stigma. We take up the task of helping you and so many others to understand. We will be persistent and firm, and even patient. But we will not accept your condescension nor will not surrender the cause of treating those who live with substance abuse challenges like human beings.

We aren't here to take a position for or against Pro. 32, but here's some friendly advice: At this point, the ad is a liability to Courage Campaign and their allies' efforts. Many otherwise sympathetic viewers are confused and hurt. There is great strength in growing in one's understanding of the pain others in society feel every day. We will respect you for your courage if you stand up and celebrate the dignity of our ghosts and help us prevent more loved ones from leaving us too soon.

With that video still up and with no apology uttered, you cannot fight stigma with us, as the stigma education must begin with yours. Take it down, apologize, and let us move forward together.

Secretary, Students for Sensible Drug Policy's Board of Directors