For some time, I've been thinking of coining the word modefolkers for inclusion into political vocabulary. Modefolker is a compound word that joins two existing words, mode and folk. The transitive verb is modefolk and the noun is modefolker. As explained below, modefolker means a person who belligerently defends the mainstream values of a culture or community.

In proposing the coinage, I am reluctant a bit because modefolker rhymes with motherfucker, a curse word. I feel modefolker will be hard to say in respectable gatherings. The word appears to violate the norms of middle class decorum. I myself will be highly nervous using this word in First Amendment or Civil Rights classes even though law students will appreciate its meaning discussed below and its input to political speech. After doing some research, I have decided to launch the word in political vocabulary.

On overcoming the lingering decorum issues, I wish to give credit to two sources. First, I was delighted to discover a 2004 movie called Meet the Fockers with a respectable caste of Barbara Streisand, Dustin Hoffman, and Robert De Niro. This discovery mitigated my anxiety over rhyming the proposed word with a curse word. Second, I was heartened (and startled) when Professor Junot Diaz used the curse word motherfucker to make a point while interviewing Tony Morrison in New York Public Library. Actually, I believe it might have been more appropriate for Professor Diaz (who immigrated from Dominican Republic to New Jersey) to use modefolker, a word that better fits with his worldview of diversity and complex immigration experience that "aliens" receive in the United States.

I propose to employ the word modefolker primarily in the context of immigration relations that exist between dominant groups and new immigrants, even though the word may be used in other contexts as well. As noted above, modefolker comes from combining mode and folk. 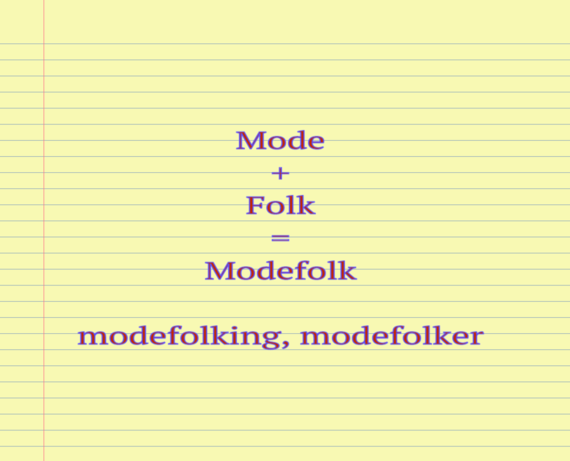 The word mode is a mathematical concept that captures the value that appears most often in a set of data (for example, 13 is the mode value in the data set: 13, 18, 13, 14, 13, 16, 14, 21, 13). According to Merriem-Webster, the word folk means "the great proportion of the members of a people that determines the group character and that tends to preserve its characteristic form of civilization and its customs, arts and crafts, legends, traditions, and superstitions from generation to generation." Thus, modefolkers stand for the preservation of mode values of dominant folks. Modefolker is most relevant in cases where immigrants seem to threaten mainstream values.

Modefolkers may or may not be bigots, even though the distinction might be difficult to hold. Bigots are self-righteous persons who strongly believe in their own views, perspectives, and prejudices. Bigots are harsh on others who fall outside their definition of what is acceptable. Bigots may or may not gain strength from social solidarity with any specific group; they may even be in the minority within the group. Bigotry may choose denial, silence, or secrecy. However, modefolkers derive their ideological commitment from the folklore. They stoke folk sentiments and are frequently open and frank in expressing their views. Modefolkers are not afraid to receive criticism or rejection.

The readers might ask for some examples of modefolkers. They are many examples that come to mind. Bill O' Reilly is a notorious modefolker who openly expresses disdain for immigrants in general and Mexican immigrants in particular. In Canada, Prime Minster Stephen Harper drew criticism for mentioning "old-stock Canadians" in matters of immigration. It is unclear whether Harper is a modefolker because his invective against immigrants is a bit restrained. Donald Trump was indeed modefolking when he connected Mexican immigrants with drugs and crime.