In the wake of the presidential nominating conventions in Cleveland and Philadelphia, it is clear we are facing serious fractures in American society that threaten to split apart our country and divisive rhetoric could drive an even deeper wedge. Because of this threat, more than two dozen prominent Americans have stepped forward to challenge the candidates of both parties to embrace an important idea that could unite our country and help solve some of our biggest problems: making a year of service a common expectation and opportunity for all young Americans. 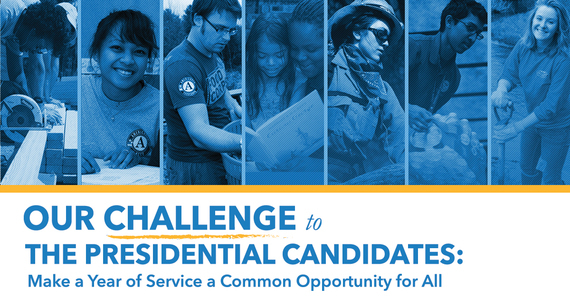 America has a long track record with service years, through programs like the Peace Corps, AmeriCorps, and YouthBuild, which offer small stipends to Americans who spend a year or two in service. These programs get things done -- by helping disadvantaged youth succeed in school, fighting urban blight, restoring public lands, improving the health of whole communities, and much more.

They also change the lives of those who serve, whether they are youth seeking a pathway to employment, high school grads taking a gap year, or college-educated young adults exploring new careers. Research shows that a year of service can help connect young people to employment, improve educational success, and develop a sense of purpose that they will carry throughout their lives. Expanding service years can help address chronic youth unemployment, and provide access to scholarships and loan forgiveness that helps solve a critical problem facing today's young adults: mounting student loan debt.

Perhaps most importantly, these opportunities can bring together Americans of diverse backgrounds in common purpose. Today, too many young people attend schools segregated not by law but by economics and housing. Only 14 percent of white students attend multi-racial schools. African-American students are more likely to attend a segregated school today than decades ago. Segregation persists into adulthood. Many Americans prefer to live in communities where people share their political views. Four in ten white Americans have no friends of other races. Even the military, which was once hailed as the place where American men of all backgrounds stood together, engages less than one percent of the population.

We can do better. Imagine what a different country we might have if a formative experience of every emerging adult was a year building skills while serving side by side with people of different backgrounds. Research on both AmeriCorps and the Peace Corps shows that these service year experiences are linked to increased appreciation for other cultures and comfort interacting with diverse people.

Candidates of both parties should embrace a year of service as a common expectation and opportunity. Americans will stand behind them. A recent poll found that 83 percent of Americans across the political spectrum support investing taxpayer dollars in national service programs such as AmeriCorps. Over the last half century, presidents of both parties have embraced federal funding for service years because they understood their value. President Kennedy created the Peace Corps and President Johnson created VISTA as part of the War on Poverty. President George H. W. Bush signed legislation creating the national service demonstration that became the foundation for the AmeriCorps program, which was created by President Bill Clinton. President George W. Bush expanded AmeriCorps, and President Obama expanded service corps through federal agencies. As a result of these efforts, programs are now in place with strong track records, ready to scale.

The next President should continue this bipartisan tradition and realize the promise of full-time service by putting AmeriCorps, the Peace Corps, and YouthBuild on a growth trajectory, and incentivizing public agencies, higher education institutions, and nonprofit organizations to create new positions that will enable every young person who wants to serve a year the chance to do so. Let's begin to repair the fraying ties that threaten to unravel America's greatness and create a force for good that our country so badly needs.