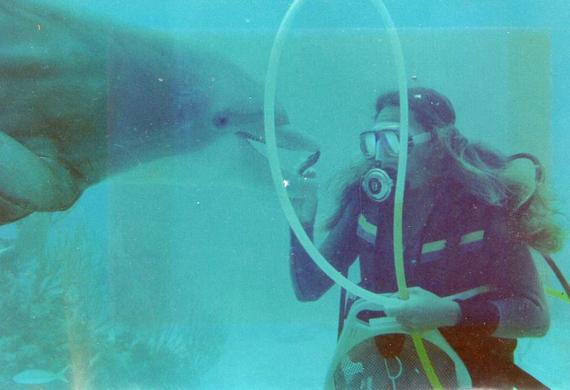 Former dolphin trainer Gail Woon is now an anti-captivity activist who is speaking out about her previous work at the Dolphin Experience (UNEXSO) in the Bahamas, on Grand Bahama Island. (Photo provided by Gail Woon)

As shown in the film Blackfish, training dolphins can leave you with a broken heart; first drawn in by the desire to be close to these charismatic animals, every trainer soon learns the dark underside of the dolphin trade and subsequently either make their peace with the miserable truth, or walk away. There is no middle ground, for as former trainer Gail Woon's story shows, management is seldom responsive to requests for change.

Woon's story started back in the 1980s, yet little has changed in the present. Her story began with the brutal capture of the dolphins she would come to love.

The head trainer for the dolphin swim company UNEXSO orchestrated a savage dolphin round-up in the murky Bay of Compeche, Mexico where the lucky dolphins were tossed back to freedom with broken limbs and internal injuries, while the less fortunate drowned or were taken to captivity by dolphin brokers -- in this case the dolphins were headed to Grand Bahama Island. Of the sixty or so dolphins trapped in the nets in Mexico in this capture, six were taken into captivity, where four remain alive today. They are housed at the UNEXSO Dolphin Experience compound where they participate in 'swim with dolphin' adventures for uninformed tourists who don't realize the suffering these programs cause.

In a recent letter to the editor of Tribune 242, Woon delineated her objections to potential development of another dolphin-swim facility in nearby Blackbeard's Cay, and backs up her reasons with personal experience.

A colleague of mine was filming the capture of the original six dolphins in the Bay of Campeche in Mexico, the first dolphins kept at the Dolphin Experience in Freeport.

The Bay of Campeche was chosen for its 0 foot visibility and the fact that it had an abundance of dolphins. The Head Trainer, Mike Schultz, who is now an infamous dolphin trader, wanted them from this location, so that if the animals ever escaped that they would not be able to find their way home.

My colleague said it was a horrible process, wherein he witnessed at least 60 animals captured, hurt, and some drowned. Animals were thrown back into the water with broken pectoral fins and worse, dead. The six that were brought back to Freeport were hidden in a secret location in a canal until their wounds healed.

The dolphins that have pink areas at their pectoral fins where we would refer to it as an underarm, those pink areas are really scar tissue that never healed properly after the horrific capture process. 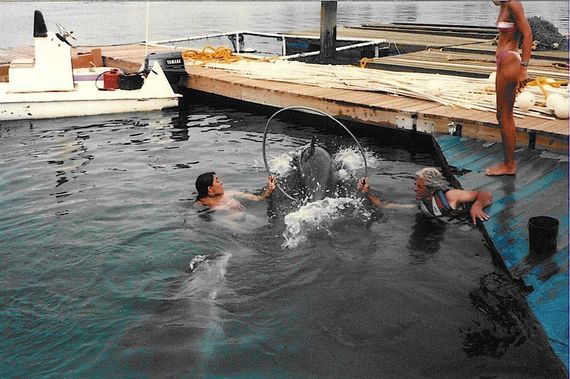 I witnessed and was made to participate in abuse of the dolphin that were left after one of the original six had died. When a dolphin would not go into the small pen at night, the Head Trainer threw items at him. He made us bang PVC pipes on the water. He threw in Igloo coolers, buckets and finally his own body trying to scare the animal into the tiny enclosure.

I was forced to throw that animal's entire diet for the day on the outside of the enclosure so that it could see the food outside of its reach for three days in a row. The Head Trainer made the staff drag a large net across the pen in order to scare the animal into the pen. He told us it was dangerous for the animals and for us, but made us do it anyway. He even shut the programme to the public so that he could work to scare this dolphin into submission.

The Head Trainer told the public we trained the animals using "operant conditioning", ignore the negative and reward the positive. This was definitely not the case when this dolphin refused to "gate" (go into the pen) through the gate.

At that time, UNEXSO Dolphin Experience was primarily owned and operated by oceanographer John Englander, who was responsible for the initial capture and training of the dolphins. He was the president of Dolphin Experience from 1987 to 1996. He has not responded to my request for information.

Dolphin captures for 'swim-with' programs continue to this day in dark corners of the ocean where the brokers can operate with relative freedom, taking advantage of lax local laws and the cheap price put on dolphin lives. While Mexico has since banned the capture of wild dolphins for display, brokers are able to skirt this by claiming they want the dolphins for "research purposes". Cuba provides a steady stream of the animals, who can fetch $50, 000 or more, and once trained can go for as much as $150,000. 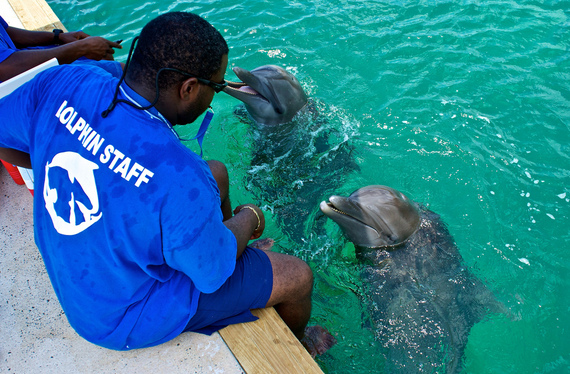 Dolphin on the right, Cayla, was among those caught in Mexico for the program. 2011. Nicholas Fluery (Creative Commons).

Woon says of her time with the dolphins that " It has been hard, as it usually leads to tears trying to remember it all. As I told someone recently, it affects you for the rest of your life. I cannot go there even though I live on the same island still. My heart can't take the look in their eyes."

I witnessed the raw sewage being released by the ancient sewage plant at nights into the area where the dolphins were housed. I watched the tourists getting rashes from being in the filthy water with the animals. When we defrosted the fish each morning, we would always get stuck with the spines. By 5pm those wounds were full of puss.

We had to train the dolphins to help us to clean their pen. We could not keep up with the minipads, condoms and tampons that would end up in the pen each day from the sewage plant overflow. When I resigned, I wrote a detailed memo detailing the abuse and the pollution issues facing the dolphins on a daily basis.

This Memo was suppressed by the Manager. However, one year later, the animals were moved to their present location, "Sanctuary Bay".

While the present day facility has improved the water quality for the dolphins, Woon is adamant that dolphins can't be kept happily in captivity. "EARTHCARE is vehemently against the introduction of any new captive dolphin facilities into the Bahamas", she said. "Atlantic Bottlenose Dolphins travel up to 40 miles a day. They can dive to great depths and live in family units. To keep a marine mammal in captivity is a very tragic situation. "

In addition to the illegal poaching, advocacy group Whale and Dolphin Conservation notes that most captures of killer whales and dolphins have moved to the far East in places such as Taiji, Japan and asks:

"When will the captures and the captivity circus shows stop? Probable answer: When the public refuses to visit the Sea Worlds, Marinelands and other facilities displaying these large social mammals. The keeping of whales and dolphins is banned in India, Cyprus, Slovenia, Croatia, Chile, and Costa Rica; a few other countries such as the UK have ended the practice but not banned it. Whale and dolphin captures no longer happen in the waters of Europe, Australia-New Zealand, and North and South America with the exception of Cuba and Honduras."

In the final analysis, if you want to swim with dolphins, then go out in the ocean with a responsible tour company and visit them in their environment. Remember, there are very few wild animals who can be taken out of the wild, traumatized, trained, and never seriously wound their captors...and then are even safe for children.

If it weren't for the dolphins' giving nature, these programs could not exist - but the dolphins are not happy, and deserve full, rich lives in the wild. 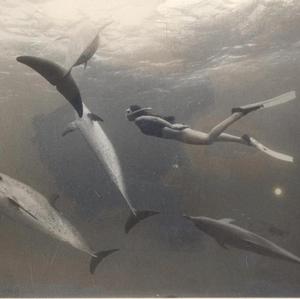 
She conducted visitor encounter sessions, worked with film crews including as a dolphin trainer for Emmy nominated 'docu-tainment' film, "Dolphins, Whales & Us", a program that she says was catalyst for Starkist announcing "Dolphin Safe" labeling on their tuna products. She rehabilitated juvenile Stenella, Spotted Dolphin to successfully integrate with wild pod of females on north shore of Grand Bahama in conjunction with the Wild Dolphin Project.