The South is struggling in many ways. Poverty rates are high, economic mobility is low, health care is often unaffordable and obesity is rampant. And a new study released Wednesday on drug use for attention disorders shines light on yet another startling contrast between southern states and the rest of the country.

The map below, which is part of a comprehensive report from Express Scripts, a pharmaceutical management company, shows where prescription drug use for attention deficit hyperactivity disorder is most prominent in the U.S. And, well, you'll see: 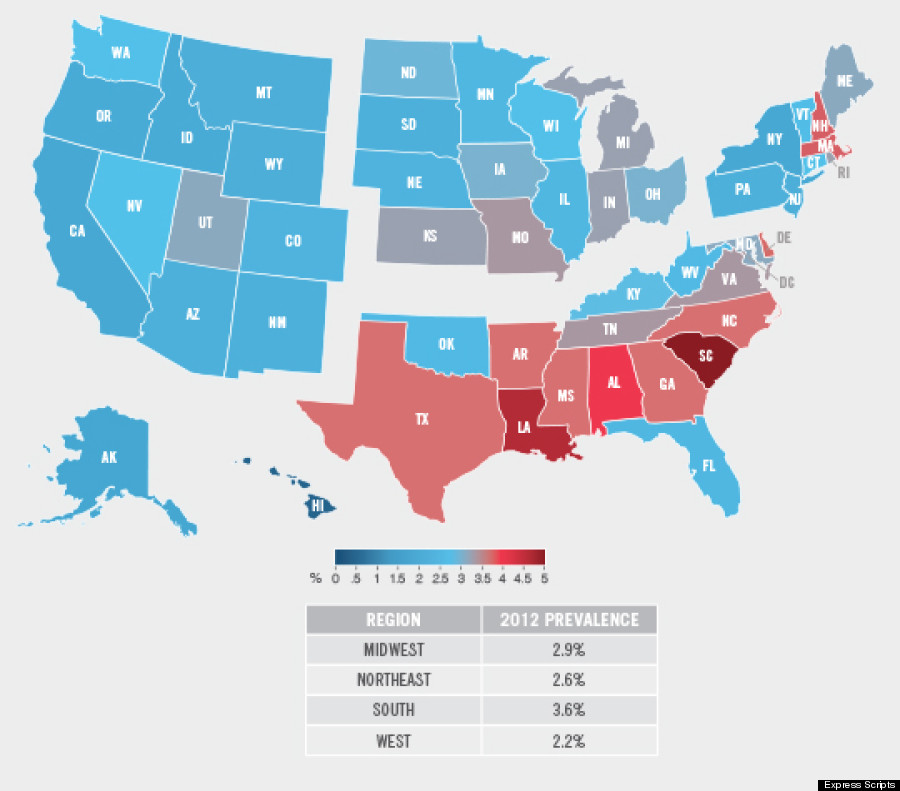 As the map shows, 3.6 percent of southerners take ADHD meds, like Adderall and Ritalin. That's much higher than the nationwide average of 2.9 percent.

It's not just the South though. All across the country, the use of ADHD medications is skyrocketing. Nearly one in 10 boys nationwide take ADHD meds. And in just four years, the number of adults using ADHD drugs has risen more than 50 percent, according to the report.

That's because more American kids than ever are being diagnosed with ADHD than ever before. The trend has some doctors and parents concerned that kids are being "overdiagnosed" and "overprescribed".

Another concern cited in the report is that ADHD meds are being used for unintended purposes.

"Unfortunately there are less appropriate uses of the medication that may also be driving these increases but raise safety
concerns given the potential side effects and addictive nature of stimulants," Dr. David Muzina, a psychiatrist and Express Scripts’ vice president of specialist practice, wrote in the report. "Since stimulants are known to decrease appetite, they are sometimes used improperly as a weight loss aid which can be an attractive alternative to willpower for dieting."