It's hard out there for an adjunct.

Adjunct faculty, also known as part-time or contingent instructors, are increasingly joining unions in an effort to ward off cuts in already low hours, wages and benefits.

Adjunct faculty now make up a majority of the higher education instructors nationwide, in a reversal from just a few decades ago. 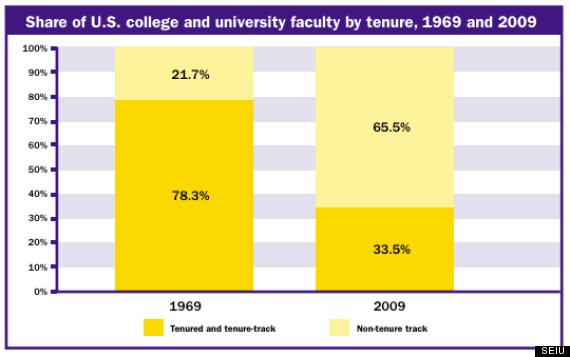 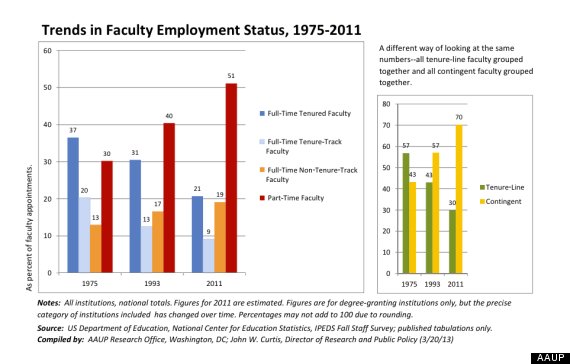 This shift has weakened academic freedom, argues the American Association of University Professors, as adjuncts may feel less inclined to express their opinions since they aren't protected by tenure.

Yet, despite research that shows adjuncts do a good job of teaching, these part-time instructors must deal with a mountain of difficulties. Here are a few of them:

LOL, You Thought You Could Just Work One Job?

According to the American Association of University Professors, among the more than 30,000 contingent professors with terminal degrees who are currently teaching part time but want a full-time academic position, more than 60 percent report having one or more other jobs.

Adjuncts typically earn between $20,000 and $25,000 annually, NPR reports. Compare that to the average salary of $84,303 for full-time instructors and professors, according to the American Association of University Professors. If you make it to the level of full tenured professor, you're looking at a six-figure income.

Institutions With Lots Of Adjuncts Do Not Have Lots Of Graduates

Adjuncts usually aren't provided office space and don't have as much time to meet with students outside the classroom, as compared with full-time faculty. Adrianna Kezar, head of the University of Southern California's Delphi Project, concluded that "institutions that have large numbers of adjuncts or students that take lots of classes with adjuncts have lower graduation rates."

A paper from the Center for the Future of Higher Education also notes that contingent faculty have less time to prepare for courses.

Based on the median pay per course for contingent faculty in New England, the SEIU estimates:

A report from the SEIU, "The High Cost of Adjunct Living: Boston A Report by Adjunct Action," included multiple anonymous quotes from local adjunct instructors. A couple of them noted that they can have their courses canceled the day before they're scheduled to begin:

"As an adjunct there is no job security. I am scheduled to teach a class at [a Boston university] in the fall. That class can be canceled up to the morning it is supposed to start -- and that is it. No pay. So all of us are hustling for work. If I am offered another class and there is a conflict, I have to pick one or the other -- but if the one I picked is canceled, then I lose my compensation because the other one will no longer be available. They treat us like we are Kleenex."

Another instructor independently added: "My wife has lost classes the week before they were supposed to run -- that is a huge hit when a third of your income is eliminated at the last minute."

When You're An Adjunct, Eating A Whole Sandwich Can Be A Luxury

"I lived off of fried potatoes and onions for the semester. I actually lived better as a grad student than I do now."

"Summer is a lean time -- it's tough on people. My colleagues talk about eating crusts and beans during that time until they finally get paid. It feels exploitive."

Most Adjunct Faculty Have No Say

A survey of 105 research universities found roughly two-thirds of institutions exclude adjuncts from faculty senates if they have "less than half the workload of a full-time faculty," the Chronicle of Higher Education reports. Of the remaining third, half allow adjuncts to join faculty senates regardless of workload, and the other half only allow governance roles to tenured or tenure-track professors.

A separate survey by the Chronicle's Adjunct Project found more than half of respondents said they have no say in faculty governance.

Living With Your Parents At Age 35

Jodi A. Campbell blogged at AdjunctNation about the sacrifices she was forced to make while finishing her dissertation, working as an adjunct -- and living with her parents:

I carpool with my father, who happens to work in the same city where I teach, because I can not afford gas to drive 90 minutes roundtrip, three times a week. On Tuesdays and Thursdays, when I don't have class, I sit at home and write or work on lesson plans for the upcoming week or search for a job, academic or non-academic, full time or part time. I really don't care. Right now, I will take anything, but no one wants to hire me because I'm either overqualified because of my education or underqualified because my work experience is spotty due to spending so much time in school.

At night, I sit at home, with my parents and my adorable dog, who really is the only bright spot in my life right now. On weekends, you guessed it, I sit at home and continue the writing, planning, or job search. I also do as much of the cooking and cleaning as possible to assuage my guilt that my parents have to feed me and give me a place to sleep.

We'd Really Rather Not Have To Provide You With Health Insurance

A number of schools, mostly public community colleges, have elected to restrict the hours adjunct faculty are allowed to work in order to avoid the Affordable Care Act requirement that would otherwise require them to provide health insurance to their employees. According to Adjunct Nation, more than 200 schools set limits on adjunct working hours.