The Obama administration on Wednesday delivered an upbeat verdict on the fate of the estimated 4.9 million barrels of oil that spewed out of BP's blown out well in the Gulf of Mexico, saying that most of it has either been dispersed, burned off, skimmed up, directly recaptured through containment efforts, evaporated or dissolved.

Relatively little, they announced, remains on the surface of the Gulf.

That last part is certainly cause to celebrate. But much of the dissolved or dispersed oil may still be causing massive environmental damage beneath the surface, even if it can't easily be seen.

So along with the 26 percent of the oil that federal scientists still can't fully account for, that means more than half could still be posing a serious and present danger to sea life and Gulf ecosystems.

A new report, which was authored by senior officials from the National Oceanographic and Atmospheric Administration and the U.S. Geological Survey, was based on findings from government and non-government scientists. The underlying measurements and methodology were not made public, however, leaving much of it looking like so much guesswork. It did, however, include this neat graphic: 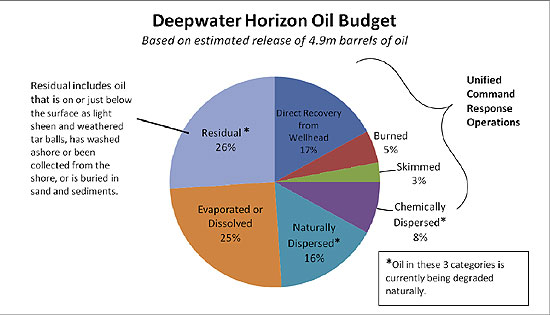 "At least 50 percent of the oil that was released is now completely gone from the system," NOAA Director Jane Lubchenco said at a White House briefing on Wednesday, adding up the amounts that were recovered, burned, skimmed, evaporated or dissolved.

But even if you grant Lubchenco her premise that the dissolved oil is truly gone, this was such a large spill that with only 50 percent left, that's still about 20 times as much oil as was spilled by the Exxon Valdez.

And keep in mind that NOAA has chronically understated the amount and threat posed by subsurface oil, first by wildly underestimating the flow rate from the well head -- by more than an order of magnitude! -- then by pooh-poohing the results of its own scientists.

Wednesday's report also notably claims that only 8 percent of the oil was dispersed due to the massive and controversial application of chemicals -- with another 16 percent estimated to have dispersed naturally, due to the depth of the spill.

President Obama himself weighed in earlier in the day. "A report out today by our scientists shows that the vast majority of the spilled oil has been dispersed or removed from the water," he said.

Under questioning by the White House press corps, Lubchenco was somewhat less upbeat. "No one is saying it's not a threat anymore," she said. "Diluted and out of sight doesn't necessarily mean benign."

She said the subsurface oil is biodegrading rapidly, but nevertheless may already have had a devastating effect on the young of many species -- for instance, it may have wiped out a whole year's worth of bluefin tuna eggs.

"I think the common view of most of the scientists inside and outside government is that the effects of this spill will likely linger for decades," she said. "The fact that so much of the oil has been removed and in the process of being degraded is very significant and means that the impact will not be even worse than it might have been. But the oil that was released and has already impacted wildlife at the surface, young juvenile stages and eggs beneath the surface, will likely have very considerable impacts for years and possibly decades to come."

Lubchenco also said that dissolved oil (like "sugar into your coffee or your teacup") is not necessarily less dangerous than dispersed oil ("broken up from large chunks into smaller chunks").

But there was a definite sense of triumphalism in the briefing room. "I think it is fairly safe to say that because of the environmental effects of Mother Nature, the warm waters of the Gulf and the federal response, that many of the doomsday scenarios that were talked about and repeated a lot have not and will not come to fruition because of that," Press Secretary Robert Gibbs said.

"I think the original scenario was off the coast of Delaware and halfway to England by September, if I'm not mistaken."

Lubchenco announced that there is "virtually no threat to the Keys of the East Coast remaining." And she and White House environmental advisor Carol Browner refused to entertain the notion that their estimates might end up being off.

"We have a high degree of confidence in them," Lubchenco said of the findings.

"The likelihood of large-scale change is very, very small, because we have so much certainty in some of the numbers," Browner said.

One particularly unresolved issue, however, remains how much risk there is that dispersed oil will get into the Gulf's food chain -- and eventually to the dinner table.

"The impact on the Gulf will take time to understand and to evaluate with confidence," she said in response to one. "We are actively doing research and monitoring the impact, but it's premature to talk about any systemic, overall impacts at this point because there hasn't been enough time to do justice to that very important topic."

The Huffington Post asked Lubchenco about our report last week that scientists have found signs of an oil-and-dispersant mix under the shells of tiny blue crab larvae all over the Gulf, the first sign that tiny droplets of chemically dispersed oil may actually enter the food chain more easily than spilled oil normally would.

"Smaller droplets affect smaller creatures," Lubchenco said. "Oil that is dispersed is more likely to be encountered by and affect the smaller life in the ocean.

"Now, let's say, for example, that a fish is eating some of those smaller creatures that had oil in them. That fish will degrade that oil and process it naturally. And so it doesn't bio-accumulate, so it's not a situation where we need to be concerned about that. Over time, it will be broken down."

But not all sea life can rid itself of oil -- for instance, invertebrates. So what about the crabs that feast on their own? Will they become unfit for human consumption? There was no time for a follow-up question.

Meanwhile on Capitol Hill Wednesday, Sen. Sheldon Whitehouse (D-R.I.), the chairman of the Committee on Environment and Public Works's oversight subcommittee, was grilling Environmental Protection Agency assistant administrator for research and development Paul Anastas and David Westerholm, the director of NOAA's Office of Response and Restoration.

Whitehouse wanted to know about the long-term effects of dispersed oil, and the danger of bioaccumulation.

As HuffPost reported on Monday, a new but very limited EPA test found that the combination of oil and dispersants is no more toxic to sea life than oil alone. But the kind of experiment the EPA conducted only measures "acute toxicity" -- in other words, how much of a substance it takes to kill the test subjects, which in this case were one species of fish and one species of shrimp.

Asked whether anyone is testing to see if dispersed oil might be bioaccumulating in Gulf species, Westerholm said seafood is being tested. But then he acknowledged that he couldn't rule it out entirely.

"Other species, some of the ones we haven't tested, some of the deeper-sea species, and whether the dispersant would get to shore with oysters or some other creature, we may be able to see some accumulation," Westerholm said.

Dan Froomkin is senior Washington correspondent for the Huffington Post. You can send him an e-mail, bookmark his page; subscribe to RSS feed, follow him on Twitter, friend him on Facebook, and/or become a fan and get e-mail alerts when he writes.