Palestinian lawyer Mohammed Allan, who went on hunger strike for 65 days to protest his indefinite detention in Israeli custody, was subsequently moved into medical care and had his detention suspended in August over fears that he might die in prison, potentially provoking massive Palestinian unrest. This raises serious questions about both the legality of Israel's administrative detention and the degree to which Israel is violating human rights.

The most troubling aspect of Israel's preventive detention policy, however, is how dangerously Israel's moral standing is sliding, not only because of the unjust treatment of Palestinian detainees, but the extent to which the country is undermining the moral imperative that gave it birth from the ashes of World War II.

A review of Israel's detention policy reveals how outrageous and convoluted the legal system behind this policy is. Israel maintains a perpetual state of emergency as a political tool to provide the legal rationale, however twisted, for the policy of continuing administrative detention.

Israel has stitched together a complex system of various emergency measures borrowed from the British mandate era, Jordanian rule over the territories, and its own military and civilian laws, while making no effort for nearly seven decades to unify these legal procedures.

Successive Israeli governments maintained this hodgepodge administrative detention system to give it the flexibility to resort to one set of rules or another to enforce detention under the guise of legality, when in fact the whole complex of emergency 'laws' are nothing but a sham governing tool.

National security considerations are used, or rather abused, to justify the indefinite detention of hundreds of Palestinians without being charged with any crime; they are denied legal defense and left languishing in jails with little prospect of being released.

Irrespective of any efforts made to deradicalize Palestinian detainees, by keeping prisoners in indeterminate detention, the prison itself becomes an incubator of extremism. Hopelessness sets in, further nurturing their resentment of the state, which naturally has a ripple effect on their families and the communities to which they belong.

Moreover, regardless of how reformed and repentant a Palestinian prisoner may become, the majority of those who are eventually released return to violent resistance as they find themselves still living under occupation with no prospect of ever changing their dismal lot.

At the beginning of September, Israel's Justice Minister Ayelet Shaked (who once advocated the mass killing of Palestinians) introduced a counter-terrorism bill that would, among other things, codify administrative detention, which would make matters even worse for the Palestinians and further debase the state's moral onus.

The bill would do away with all prior emergency measures and further increase the state's ability to withhold evidence from the suspect and their legal representative under the pretext that providing such information would jeopardize national security.

Moreover, this bill contradicts the very notion of law as such, which does not operate through brute force and terror but recognizes the equal worth and dignity of every individual who stands before the law. What the bill will do is make it much easier for the state to legally detain Palestinian suspects indefinitely without putting them on trial, adding yet another layer of moral decadence to the already bankrupt legal system. 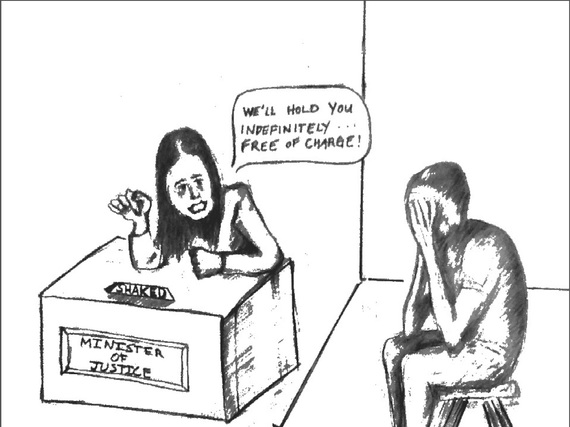 That said, anyone who is familiar with Israel's state of being from the day of its inception to the present cannot deny the fact that the country has legitimate national security concerns. But when national security becomes a political tool, Israel opens up itself to intense criticism and condemnation.

Whereas every country is obligated, regardless of the nature of its governing authority, to safeguard human rights, Israel has a double burden to adhere to such norms of moral conduct not only because it claims to be a democracy, but especially because of the unique circumstances under which it was created.

In fact, the entire international community holds Israel to a double standard, expecting it to bend over backwards in its treatment of other humans precisely because of what the Jews have endured over many centuries of persecution, expulsion, detention, and death.

Whereas these unfathomable historic experiences are justifiably ingrained in the mind and soul of every Jew and give rise to Israel's deep concerns about its national security, many hard-core Israelis believe that because of these horrifying historical experiences, they have the license to treat others the way the Jews were treated.

This sense of trying to correct a historical wrong became a sort of national mantra, disregarding the fact that ill-treatment of the Palestinians by successive Israeli governments has alarmingly degraded the country's moral principles and exasperated rather than mitigated its national security dread.

The irony here is that while Israel seeks to contain Palestinian extremism, which is necessary to safeguard its national security, by its own very actions against the Palestinians Israel is undermining its legitimate national security concerns and fostering even more extremism.

Paradoxically, just about every security official and many ordinary Israelis are quick to point at any violent incident perpetrated by a Palestinian as proof that the Palestinians are and will always be a security risk. They conveniently ignore the harsh reality of fifty years of occupation and its poisonous effect on every Palestinian.

Any Israeli government can indefinitely detain tens of thousands of Palestinians and adopt any counter-terrorism bill, but it will still never be able to contain the Palestinians' vehement resistance as long as the occupation persists.

Israel's legitimate national security concerns do not rest on building more settlements, expropriating more Palestinian land, or erecting walls and fences, and certainly not by indefinite incarceration of Palestinians, however violent they may be.

On the contrary, these measures, not to speak of the ministers in the current government who openly call for the annexation of much of the West Bank, only exasperate Israel's national security and endanger its future as a democracy and a safe country for those Jews who choose to make it their home.

Israel's national security ultimately rests on the moral imperative on which the state was created, and an amicable solution to the conflict with the Palestinians remains central to Israel's moral resonance as a democracy with a Jewish national identity.