The Supreme Court case of Adopted Child Doe brings to a head the absurdity of amended "birth" certificates issued to adoptees.

The 20-month-old known as Adopted Child Doe is Cooper Talmas-Vitale. Cooper was adopted by Joseph Vitale and Rob Talmas shortly after his birth in Ohio. The adoption is recognized in New York, where the two men are married and live with the toddler.

But Ohio, the place of Cooper's birth and where his birth certificate was issued, has told adoptive parents Vitale and Talmas that they have to choose which man gets to be the legally listed father on Cooper's new certificate of birth.

Cooper's case has been consolidated into four cases from Ohio and one case each from Tennessee, Michigan and Kentucky. All are awaiting a U.S. Supreme Court ruling on whether same-sex marriage is an unalienable constitutional right.

The case of Adopted Child Doe, however, goes beyond issues of marriage or the right to marry. It is about a child's birthright, his dignity and his 14th Amendment rights.

"Children, as they figure out who they are in the world, care about things like dignity," said Amy Davidson, writing about this case for The New Yorker.

"There are three other couples in the Ohio case with children who have similarly been denied accurate birth certificates."

What is accurate about a certificate of birth that indicates a child was born to two men (or two women) or any two people who had no part in the child's procreation and to whom the child has no genetic connection?

If both of Cooper's fathers are granted the right to have their names on his birth certificate, he would have an "amended" birth certificate equal to those of all adopted persons in the U.S., none of which are accurate or true records of the child's birth because they falsely identify the adoptive parents as the parents of birth.

A certificate of birth is a vital record and the basis of all identification. According to the Department of Health and Human Service, office of Inspector General: "A certified copy of a birth certificate is proof only that a birth occurred and was recorded." Every adopted person in the U.S., including step-parent adoptions, however, is issued an "amended" certificate of birth that does not indicate that it is amended and makes it appear that the person was born to their adopters.

In all other cases, when a birth certificate is amended, the change is made evident and the date of the change indicated thereon. This is not the case on the new certificates issued to adoptees, which in no way indicate that they are amended.

Upon the issuance of an amended birth certificate, the original, true and accurate certificate of birth is sealed and in most states inaccessible to the party whose birth it documents.

Today, children are adopted in various ways, and adoptive parents are now encouraged to tell their children they are adopted. Children coming from foster care as older children or in sibling groups know that they are being adopted. Most domestic infant adoptions today are open to varying degrees, with many adopted children knowing their birth families. International adoptees often involve children of ethnicities and races different from those of their adoptive parents, making secrecy a non-issue, as it is also for any child who is adopted by same-sex parents.

The need for false birth certificates to maintain adoption as a lie has passed. It is obsolete. Yet, we are still living with outdated adoption laws and procedures that have not kept pace with the changing mores. Adoptions, even domestic infant adoptions, are not finalized for at least a year after the birth and placement. Step-parent adoptions can occur at any time up until adulthood. This has caused adoptees difficulty in obtaining drivers' licenses and passports, especially since 9-11, because the filing date is far removed from the date of birth.

Adoption does not change the genetics of an individual, and thus should not change the documentation of his biological heredity, which is a vital record. Adoption is a legal change of custody and guardianship, which may also change the child's name, and should reflect those changes, not go back in time and rewrite history and falsify the accurate facts if the child's birth. No adoptive parents -- regardless of their sex -- should have their names on a certificate of birth for a child who was not born to them. Adoptive parents are the legal parents, but they are not the parents of birth. Altering vital records in this manner, without any indication that it has been updated or amended, is fraud. 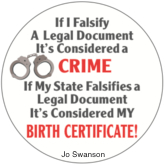 It is critical for the Supreme Court Justices to see that the case of Adopted Child Doe is not merely about Ohio recognizing the marriage rights of Vitale and Talmas. It is about the right of their child and all adopted children to a truly accurate record of their birth. It is an opportunity for the nation's highest court to see that issuance of "amended" birth certificates that create the appearance of children having been born to their adopters as state-committed fraud and put an end to this bizarre, dishonest and antiquated practice.

Adoption is supposed to be in the best interest of children. Yet, for generations, adoptees have lived with falsified birth certificates and have been denied the right to their accurate, original birth certificates in most states. The time to end this injustice, to treat adopted citizens the same as all others, is now.