As the nation watches the Indiana battle between religious freedom and discrimination against same sex couples, there is another, little known civil rights battle playing out in the Hoosier state (and elsewhere in the U.S.): Adopted citizens are fighting for equality.

Adoptees' right to access their own original birth certificates is being pitted against the alleged rights of their mothers. However, granting adopted citizens equal access will, in fact, keep the parents who "begat" them safer from exposure than keeping the records sealed. 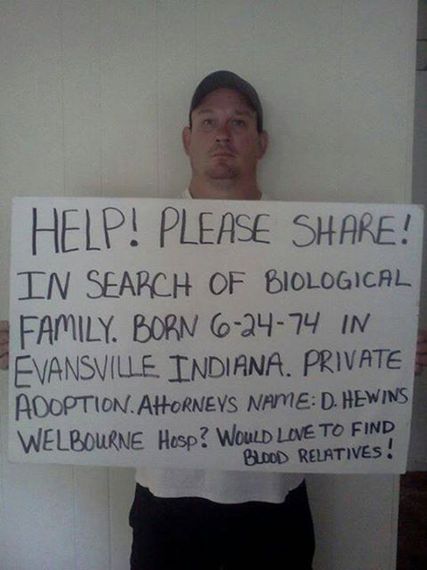 Despite the media using language that says the issue involves opening adoption "records," it does not. What adoptees in Indiana, and many other states (see details below), are seeking is equal protection under the law in regards to access to their own authentic, original birth certificate, a vital record denied only to adopted citizens and no others. This would restore rights that have only been blocked in most states since the '40s, and in Alaska and Kansas access has never been denied.

Recently, Ohio and Montana are about to become the 18th and 19th states to allow adopted adults access -- some partially and some with restrictions -- to their previously sealed birth certificates. Adoptee rights advocates are adamant that equal is equal. Just as equal but separate education was ruled unconstitutional, adopted persons deserve the same right to obtain their unaltered birth certificate as all other citizens take for granted. Restrictions, limitations, or conditions that apply only to this is class of citizens is unjust and discriminatory.

The laws restricting access are in flux in a number of states, moving slowly from the World War II era of secrets and lies which were encouraged in adoptive families and validated by falsified birth certificates which state that adopted children are born to their adoptive parents.

Currently, Arkansas, California, Connecticut, Missouri, New York, Pennsylvania, and Texas have legislation pending to restore adoptee rights and Massachusetts is working to expand access to all adopted persons, particularly those born prior to July 17, 1974 and after January 1, 2008 who were excluded in the most recent legislation. More information about adoption access state by state is available here and here.

Access to one's own birth certificate is a right of all U.S. citizens that adoptees are being denied in violation of the 14th amendment that provides for all laws to be applied equally to all persons, without discrimination. This position is supported by the American Adoption Congress, Concerned United Birthparents, The Evan B. Donaldson Adoption Institute, National Association of Social Workers (NASW), Child Welfare League of America (CWLA), and the North American Council on Adoptable Children (NCAC).

While Catholic Charities in many states oppose access, in 2012, Joseph Krygiel, CEOO and Sandra Valenica Thompson, Manager of Clinical Services, Catholic Charities, Atlanta Georgia wrote legislators in support of allowing adoptees in that state access to their original birth certificates. 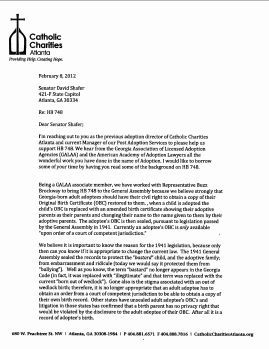 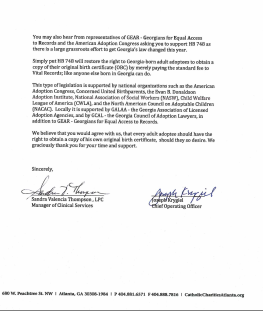 Discussions about adoptee civil rights raise concern about the seemingly competing "right" to secrecy -- a non-existent right -- of the adoptees' original mothers (and fathers). Those who oppose access feign a concern for protecting the privacy of mothers and fathers who were allegedly promised anonymity. However, mothers (and fathers) who voluntarily or involuntarily relinquish parental rights in order for a child to be adopted were promised nothing in the past and currently many are being promised open adoption. Further, when the original birth records of adopted persons were sealed there was no mention of protecting mothers or father of birth. The concerns were to protect adoptees from the "stigma of illegitimacy" and to protect adoptive families from unwanted intrusion or blackmail by birth parents.

Assumptions like this ignore the fact that the vast majority of mothers and fathers are happy to be found, and if they are not, they have every right to refuse contact. There are ample laws to protect us all -- equally -- from unwanted harassment or stalking. Adoptees and their parents of birth do not need, or want, laws that apply only to them, as if they are a suspect class of people. Further, in today's day and age anyone can find anyone and in no other arena do we have laws to protect people's secrets or lies, especially when to do so violates the civil rights of others. Additionally inasmuch as no state is considering access for minors, mothers and fathers who have placed children for adoption or had them taken by the state and subsequently adopted out, have 21 years to prepare for the possibility of being found, a very real possibility with or without adoptees having access to their birth certificates.

One camp opposing access consists of Right-to-Lifers, and in many states, Catholic Charities. These anti-choice groups believe that if the records are no longer sealed, mothers will choose abortion over adoption. This claim belies the fact that in states that have allowed access, there has been no increase in abortion or decrease in adoptions.

It is important to note that notorious baby sellers such as Georgia Tann were instrumental in creating sealed adoption records to protect themselves from scrutiny. Today, major opposition comes from lobbyists for the mega-billion-dollar adoption industrial complex -- and in some states the Bar Association -- whose member adoption agencies and practitioners prefer to practice in opacity rather than transparency. Much of adoption falls in gray areas between ethical and black market. Mothers are often sent to deliver in one state and sign away her rights in another, often without the father's knowledge or consent. Adoption agency businesses and attorneys thus seek to protect themselves from any irregularity being revealed. Also, adopters are the only paying client in the process and it is still assumed that those who adopt want or need protection from interfering birth families.

Most domestic adoptions today are open to one degree or another. Most all begin with the birth and adoptive parents meeting. Some open adoptions include an agreed upon exchange of mail, and photos after the adoption is finalized and some such open adoption agreements even include in-person visits. Adoptions that remain open are proving to be a positive experience for all of the parties while even these open adoptions begin with the original birth certificate being sealed, as do step-parent adoptions.

The opposition's position is that protecting the small percentage of mothers and fathers who live in fear of their secret of having been pregnant in a time when out-of-wedlock pregnancy was a "sin" and source of shame, trumps the right of adopted persons to equal treatment under the law. In more than 90 percent of cases, mothers who have lost children to adoption long to know they are alive and well and happily welcome them.

More importantly, allowing adoptees access to their vital birth record is not making the information public. Rather, it keeps it private, within the parameters of the mother and her adult child.

Without direct legal access to their own birth certificate -- as all other non-adopted citizens have -- adopted persons are resorting to far more public means of locating their kin, methods which expose their mothers far more than releasing the information to the person who is named on the birth certificate.

"Unlike the rest of society that have unfettered access to who they are, adoptees in many jurisdictions are left to their own devices as how to have that same sense of self that others not impacted by adoption take so easily for granted. But here's a truth: It is because so many jurisdictions uphold such archaic and antiquated laws and blatantly refuse to acknowledge the harm that such laws cast on so many of us." Mike Slayter

One method adoptees are resorting to in their desperation for the truth is Facebook postings that expose the information to everyone on Facebook -- 1.35 billion in 2014 -- and anyone else it is forwarded to. 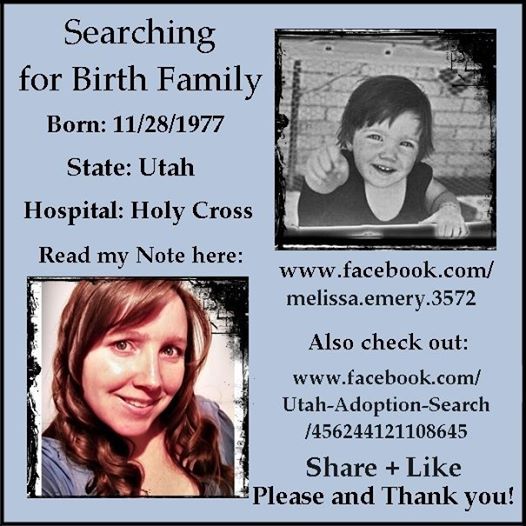 The other method adoptees are availing themselves of is DNA testing via 23andme and other such companies. This method of locating blood relatives yields everyone biologically related who has also been tested and registered. What this means is that adopted persons, in their plight to locate their birth parents, may first contact aunts, uncles, siblings, and cousins who may have never known that their niece, cousin, sister or mother had a child out-of-wedlock. This haphazard method provides far less protection to those who are alleged to be living in fear of being "outed" than allowing two blood-related adults the ability to maintain control and keep their business between just the two of them.

Giving adoptees access to their own vital birth certificates is the fair and equitable thing to do in a nation that prides itself on upholding human and civil rights, and it is also the safer, kinder and more private way to protect birth parents allowing what are personal and family matters to remain private. Maintaining sealed adoption records does not protect mothers and fathers of birth but rather puts them in far more jeopardy of public exposure.

It is time for all states to get on-board and restore these rights that have been denied for too long. Adoption is intended to provide children a "better" life and is purported to be "the same as if" being born into one's family. Let's make that a bit more true by ending discriminatory laws that treat adopted persons differently from everyone else.