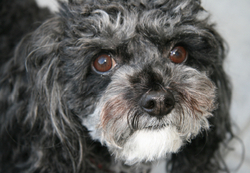 Bear with me. This blog's theme is adoption. Me, you, and others. So far, it has covered those people who were lucky enough to be adopted (me) and those who were not lucky -- foster kids like Shenandoah Chefalo--who struggled.

But adoption runs the gamut. As Webster's defines it, to adopt is to: (1) Take by choice into a relationship; especially, to take voluntarily (a child of other parents) as one's own child (2) Take up and practice or use, (adopt a moderate tone); (3) Accept formally and put into effect (adopt a constitutional amendment) (4) Sponsor the care and maintenance of (Adopt a highway); (5) Choose (a textbook) for required study in a course. Adopting a pet falls under the first definition.

Pet adoption is huge in this country, and indeed worldwide. (That's my dog, by the way. And he's a rescue.) At issue is how hard it is for those living in poverty to properly care for their dogs and cats. It's also difficult to assess the impact as the sources for pet adoption statistics claim the data are not accurate. The Humane Society of the United States reports that ..." Obtaining accurate statistical data about pets in the United States isn't easy. Most of the information is based on estimates derived from surveys..." and ... "The terms "humane society" and "SPCA" are generic; shelters using those names are not part of the ASPCA or the Humane Society of the United States. Currently, no government institution or animal organization is responsible for tabulating national statistics for the animal protection movement."

The two main sources in the U.S. are the APPA (American Pet Products Manufacturers Association) and the U.S. AVMA (American Veterinary Medical Association). Their estimates are deemed "reasonably accurate" according to the Humane Society website. The APPA reported facts are that 79.7 million households or 65% of all households in the U.S. have a pet according to the 2015-16 survey. The AVMA data are four years old, and suggest that 66.5 million (or 56% of) households have pets. Bottom line: there are lots of pet dogs and cats. Total pet ownership: 163.6 million in the most recent APPA survey, which is about half as many people as in the U.S. today (322.7M).

Brazil has the second largest number of pet dogs after the U.S. Then China and Russia for dogs. China is second behind the U.S. for cats, followed by Russia and Brazil. All four countries are developed countries. Meanwhile the fastest growing population in the world for dogs is in India. The numbers are mildly interesting, but what do they mean to you and me?

Pet populations matter because over half the households in the U.S. house a pet as seen above. The ASPCA says 28% of dogs are purchased from breeders. The other 62% are adopted. The AVMA survey says 63.2% of the pet-owners consider their pets to be family members. They are important. And the pet populations matter to society because owning a pet is expensive, and has a correlation to the economic welfare of a country: the higher the rate of pet ownership, generally the more wealthy the nation. But even in wealthier nations, pets challenge household budgets for lower income people.

It's too bad. At any income level, people want to care for their pets. It's one of those things that unites us all as human beings. Pets are an equalizer-- like music or football. Dogs and cats, snakes, birds, reptiles, fish and bunnies slice through socioeconomic strata and make gender, age, and ethnic differences disappear behind a can of pet food. Pets let people give without expecting a lot in return. Sometimes we get returned love, but often not. And that's okay.

In fact it's good.

Why Pet Over Population Matters

The problem with owning a pet is that veterinarians are expensive especially for lower income folks. Therefore, while spaying and neutering are "expensive," these procedures are less than the cost of raising puppies or kittens. So unfortunately, litters are sometimes abandoned. There are said to be over 70 million stray cats in the U.S. And cats are prolific. The average number of litters a fertile cat produces is one to two a year; the average number of kittens is four to six per litter. Dogs have the same litter size, but only average one litter per year. Accurately counting stray dogs OR cats is mostly impossible. The problem compounds itself: stray animals add to the population of stray animals in huge uncontrolled numbers. Spread of disease and infection adds to social costs of the unhappy proliferation.

Cats and dogs are great companions. They teach responsibility. They do love you (yes, cats, too). They keep people company. They love to play. They are awesome.

If possible, help the shelters and agencies that protect us against overpopulation and spread of disease. If all income levels could afford proper pet sterilization, that would be, as Martha Stewart might say, "a good thing."