Allison, 40, has three children -- a 6-year-old, a 2-year-old and a newborn adopted son. In the latest installment in our "Breastfeeding Chronicles" series, the Washingtonian, who works full-time in human resources, talks about what it's like to build a milk supply for a baby who isn't biologically your own, and why breastfeeding him felt particularly important.

CAN IT BE DONE?

As soon as my husband and I started working on the adoption plan, we wanted to find out about breastfeeding -- Was it possible? What does it look like? It was such an important part of my experience with my older children and I wanted to provide that for our adopted baby, too. I started with a Google search on adoptive breastfeeding and was able to find a lot of information on inducing lactation, much of it from Canada.

I went on medication about four months before our youngest son was born, and started pumping six weeks before his birth in order to get ready to breastfeed him. There are a few different variations of lactation induction depending on how much time you have before the baby is born. I followed the accelerated protocol.

I took a combination of the birth control pill -- which has hormones that are intended to mimic pregnancy -- and another medication that is actually not approved by the FDA for this specific use in the U.S., but that is used in the EU and Canada. It's called domperidone, and it causes your body to start to release prolactin -- a hormone that helps make breast milk.

I went to my primary care physician first, and she was so leery and not particularly interested in helping me research my options, which was really disappointing. So I switched doctors. The next one sat down and read through the lactation induction protocol with me and happily prescribed me the hormone, but referred me to an OB who had educated herself on this issue before we met and who prescribed the domperidone. I had insurance coverage for the hormones, probably because the insurance company didn't know why I was taking them [laughs]. I could not get insurance coverage for domperidone, so that was out of pocket -- around $160 a month.

I pumped every three hours for the six weeks before our son was born, even at work. I got up in the middle of the night. For the first week, I made literally drops. But slowly, I was able to increase that to about 5 ounces each day. That's a little bit more milk than is typical, and probably had to do with the fact that I just stopped breastfeeding my middle child a year before.

We were so lucky that when our son was born, my husband and I were able to be in the delivery room. After, we went to the NICU together, not because he had any complications, but just because that's where they wanted to have him. Within the first hour, I was able to breastfeed him, and I stayed with him and breastfed him every time he woke just like any normal mom would. I was only the second person they'd encountered at the hospital who'd ever done this, so everyone was asking questions -- What are you doing? How did you prepare? They were very concerned about whether he was getting enough food, so they kept weighing him, but he was fine.

When we got home, we started using a supplemental nursing system, which lets me use the milk I pumped as well as donor breast milk, which we're now getting because I can't produce enough milk to support his needs. It goes in a small bag with a tube that I hold next to my nipple and that delivers supplemental milk. He gets around 20 ounces of donor milk a day at this point, as well as the 5 ounces I make.

WHY WE DO IT

But because he's adopted, breastfeeding felt even more important. I wanted him to feel that bond -- that closeness and skin-to-skin, to help him feel comforted. Not being pregnant, and not knowing what he felt like in the womb beforehand ... I wanted that physical connection with him afterward. And it's just been really easy so far, although I don't love the supplemental nursing system [laughs]. There have been moments of trying to get him to latch where, I'm just like, 'Ok! I'm done!'

But I feel so bonded and attached to him, and I think a huge part of that has been the breastfeeding. 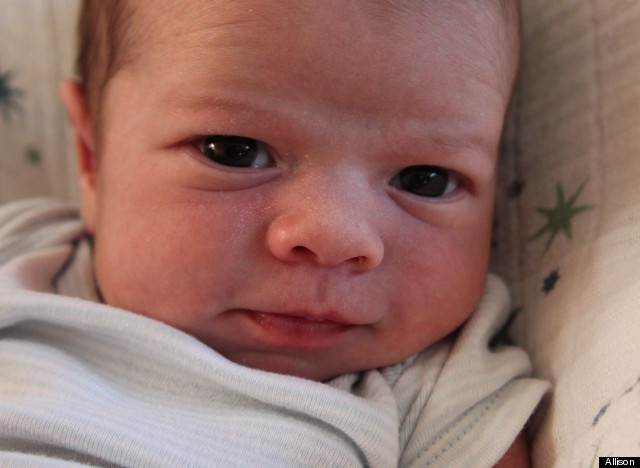 David is being fed with a combination of Allison's breast milk and donor breast milk.

I'm really pleased to be able to help spread the word on adoptive breastfeeding. At the hospital, for example, one of the NICU nurses was delighted to see us succeed so that she could tell other moms it was a possibility. People don't know you can do this. I don't mind the attention, the curiosity, at all.

I'm so proud of being able to build up my milk supply before he was born -- I was able to get him through the first week of life on just my own milk. It felt so rewarding, like all that work of getting up in the middle of the night to make milk for him was worth it.

I was able to hit 13 months of breastfeeding with my first child, and 10 months with my second. If I can get him to six months with everything I'm doing with the supplemental nursing system, I'd be thrilled. But I'd love to hit a year. We'll see!

In celebration of National Breastfeeding Month (Aug. 1-30), HuffPost Parents is participating in "I Support You," an initiative to collect photos and messages from mothers to each other that say we might lead different lives, but we share wanting the best for our children. Find out more here.