Sometimes stories emerge during March Madness that force you to put down your brackets and pay attention to what's really important.

The friendship between Michigan State basketball star Adreian Payne and 8-year-old Lacey Holsworth is one of those stories. 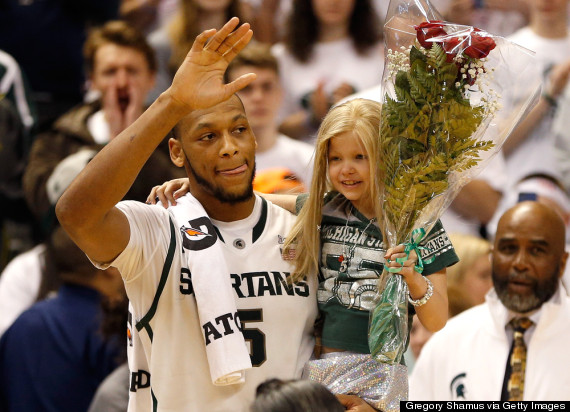 They met two years ago when the Spartans visited a hospital where Lacey was getting treatment for neuroblastoma, an aggressive cancer of the nerve tissue. Their relationship has thrived, and they reportedly text every day.

As the Washington Post notes, Payne attended a fundraiser for Lacey, and Lacey, who was Payne's guest on senior night, helped him cut down the net after Michigan State won the Big Ten tournament.

Now that Payne and Michigan State have advanced to the Sweet 16 in the NCAA Tournament, the duo's touching bond continues to move fans. A video posted by the Big Ten Network earlier this month covers Payne and Lacey in tear duct-draining detail (watch below).

"She's like a sister to me," Payne says in the segment. "I love him," Lacey declares.

If your favorite team has been eliminated, you might just cheer for Payne and Michigan State on the basis of the video alone.

Watch Payne and Lacey, aka Princess Lacey, cut down the net:

This Pair's Beautiful Friendship Will Fill Your Heart With March Gladness
People Receive The Best News Ever
1 / 15
World War II Savior Reunited With Children He Rescued
This BBC TV show "That's Life" that aired in 1988 connected Sir Nicholas Winton with some of the lives he saved during World War II. In an operation called <a href="http://storify.com/storyvault/the-c" target="_hplink">Czech Kindertransport</a> Winton organized the rescue and safe passage of about 669 Jewish children who were designated for transport to Nazi concentration camps. In the clip, one of the children, Vera Gissing, embraces Winton and thanks him for saving her life.