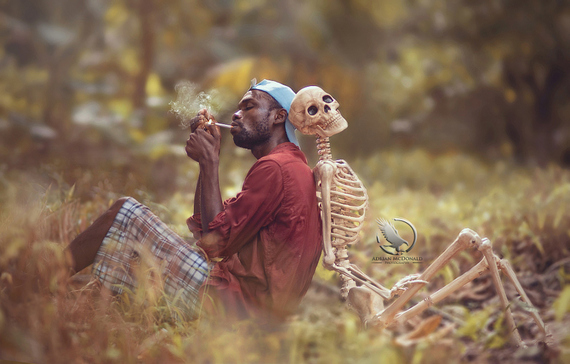 I'm a big proponent of the idea that each photo must tell a story. Great photography should have a message--a purpose that transforms each single frame into something more.

Adrian McDonald has, perhaps, internalized that idea more thoroughly than any other photographer on 500px. By today's terminology he's a conceptual photographer, but he doesn't like that term because it's missing the point; he calls himself a "philosophical" photographer who "creates concepts with a purpose."

His photos and photo series are each based on a concept or story that he wants to convey to his viewer. Some photos punch you in the gut, others subtly tug at an idea buried deep within your mind. All of them touch on something more than just aesthetic beauty.

This along with the fact that he's obviously spent a lot of time honing a specific, recognizable style (more on that below) immediately drew me to his work when I saw it popping up in my 500px Flow.

To that end, I sat down (digitally speaking) with him to ask about his journey and specifically talk about his favorite series of conceptual images, called Human Affliction, "which target issues affecting humanity, with portrayal of how to overcome along with encouraging quotes."

The images are spread out among his incredibly thoughtful answers to my questions. Scroll down and enjoy!

500px: First off, please tell me a little bit about you and your journey as a photographer.

ADRIAN MCDONALD: I was introduced to photography by a friend (Richard Brown) in April of 2012; up until the beginning of 2013 I was primarily a wedding photographer, but I felt something was missing.

Prior to becoming a wedding photographer (discovering photography) I used to paint and draw a lot, art was innate to me so all things related to it came naturally. Because of such, I developed a peculiar interest in conceptual photography--this began in January of 2013.

At first inspiration seemed difficult; what I could paint easily, I found I could not capture so effectively because of a lack of resources etc. I had to improvise. I used my closest friends as models to help develop my skills. The results were awful at first as I couldn't seem to effectively capture what I envisioned but with much effort... day by day... I got better.

Fast forward to 2014. I had achieved a pretty decent grasp of how to execute my ideas. I could capture as effectively as I envisioned/conceptualized but there was still one problem: I couldn't find my own unique style of post-processing.

As such I experimented with a method of colour grading film that I had learnt from my time studying film production (I studied film production simultaneously from 2012 to 2014), so I transferred my knowledge to photography. At this point of discovery I knew I had found myself within this sphere of art, the foundation had been created, it was time to build.

My building process--which includes branding and acquiring inspiration--took many forms, but I remember most notably when my work transformed from plain conceptualism to being more philosophical was when I discovered the work of Joel Robison. It opened a whole new sphere of possibilities for my art. I was no longer randomly creating concepts, I now had concepts with purpose.

With such I created an Instagram account, re-branded my Facebook page, and labeled myself not so much as a conceptual photographer but a philosophical photographer who uses photography to bring awareness as well as positively enable the human condition. 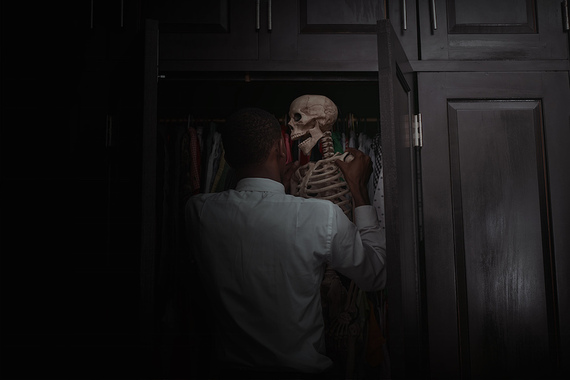 What inspired this series?

ADRIAN: That's a great question. My inspiration is very simple: it's the issues affecting humanity. I feel the need to inspire change and bring awareness to pertinent issues affecting us. I love to focus on the core essence of issues that plague us and seek to provide a way to overcome such.

So this series is like an awareness pill, it doesn't necessarily provide the answers but it will trigger the relevant questions that will bring you to your own conclusion. 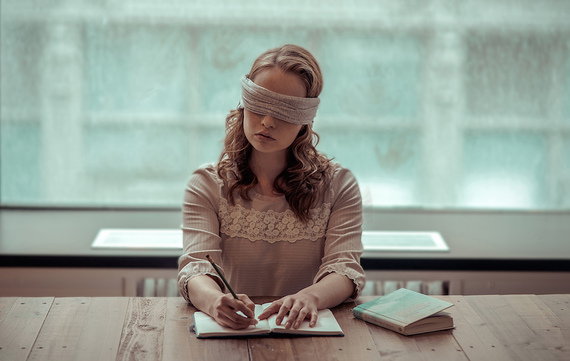 What message were you hoping to convey with these photos? They certainly evoke a strong reaction when you look through them! What are you hoping viewers would "walk away" with?

ADRIAN: Another great question. When I create an image it is for the sole purpose of positive influence. I use my own emotions as a factor to judge. If, for example, I take a photo and it doesn't elicit any particular emotional response (from me), then I know I have failed the art of creating it.

There must be something that invokes an emotional response so I input elements that will create a great degree of objectivity. In the end, it's about bringing order to chaos and harmonizing what's destroying us as human beings. That's what I hope they walk away with, 'harmony' through discerning. I simply present the facts. 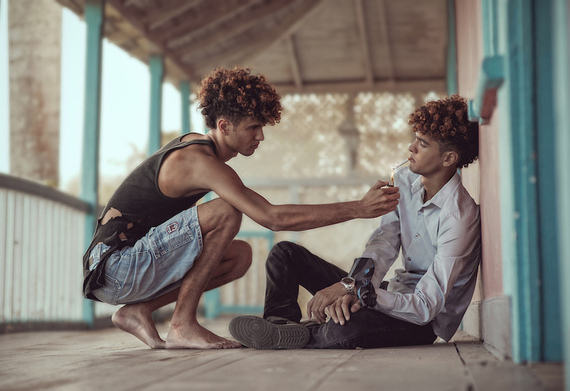 Do you have a favorite image in the series?

ADRIAN: Yes I do, it's called 'Overcoming Suicide' (below). The one where there is a young man beside a log that's cut down with a noose in hand. The reason is because of the impact it had on an individual who emailed me... she told me that it helped her to overcome certain suicidal tendencies.

I'm unable to divulge more due to a privacy request, but because of such it certainly became my favourite!

What about a memorable story that happened while shooting one of the photos?

ADRIAN: Haha ok here goes! It happened with my favourite image as stated above.

It was a rainy Friday afternoon back in December of 2014. I was walking through my backyard when I stumbled upon a fallen log from a nearby tree. I had been contemplating doing a suicidal depiction shoot all year but the idea wasn't materializing properly so I left it in my mind until it could mature. On that day the idea did mature/materialize, almost miraculously.

Upon discovering the log the idea of the noose, axe, and all the elements flashed in mind and at that point the idea which was in infancy all year came in to being. Just then the rain began to drizzle (I dramatized it some more in Photoshop). At the same time a friend came by to pick up a hat he left at my home, and upon seeing him I realized the manifestation.

He was soaked/drenched from head to toe and dressed in neutral colours with an old shoe (he was coming from a river). I immediately looked back at the log and smiled. I asked him to be a character in the concept and he agreed. I don't know if it was perchance but it all came together miraculously. That's perhaps my most interesting story! 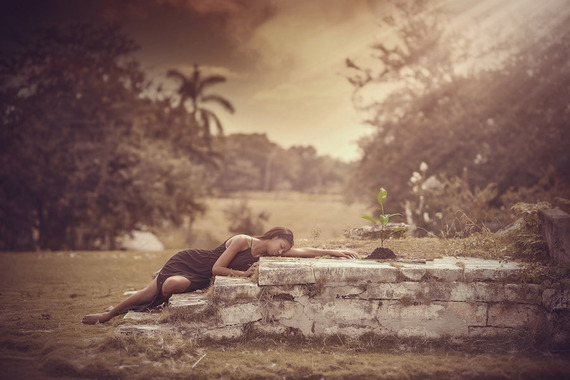 What was the most challenging part of shooting these images?

ADRIAN: The most challenging part was undoubtedly getting the resources and characters together for each concept. This is primarily due to the fact that I have a pretty established idea of who and what will be involved in each concept, which sometimes makes it hard to find the ideal person. 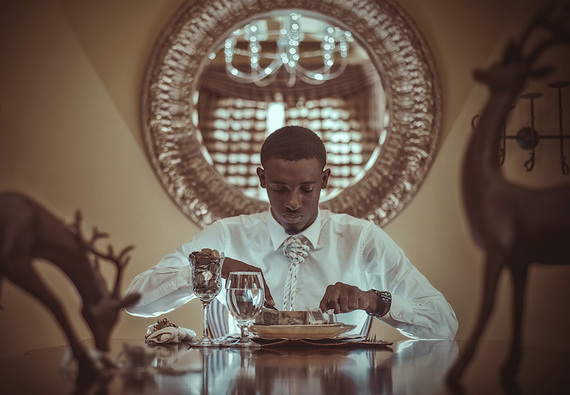 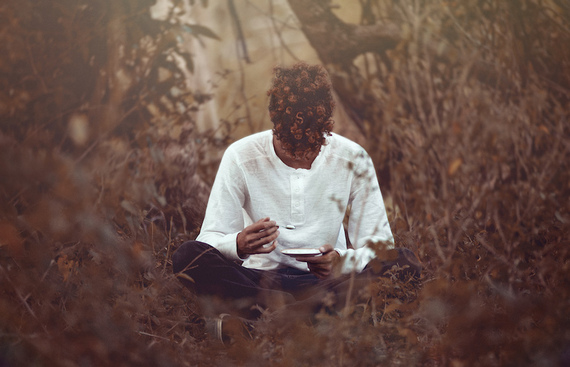 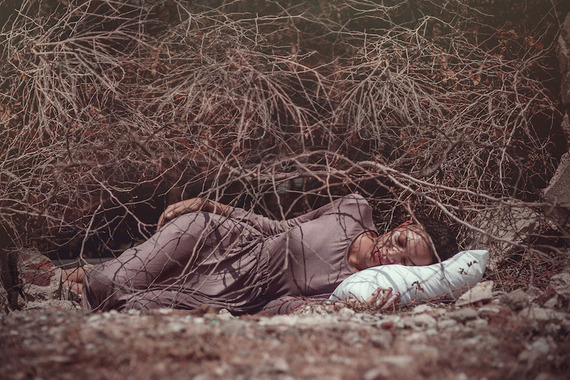 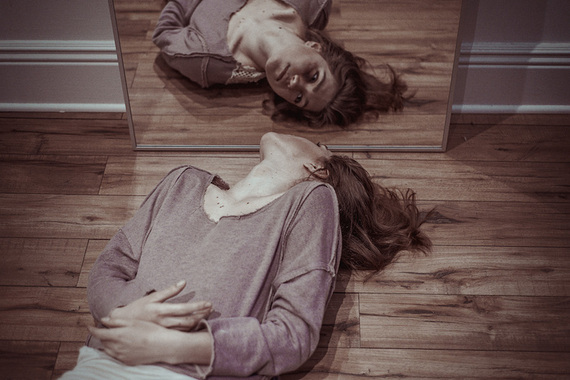 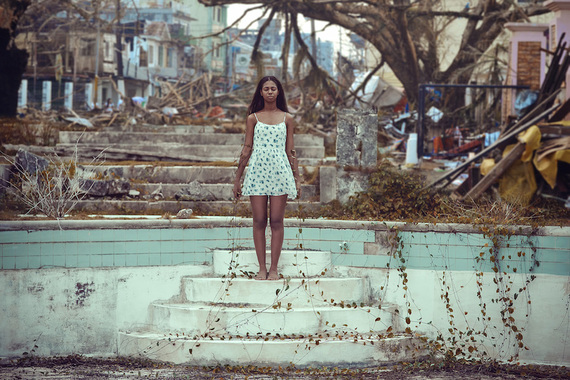 A huge thank you to Adrian, both for creating and sharing the work he does, and for answering my questions so thoughtfully. I couldn't have asked for more great insights!

This article originally appeared on the 500px ISO blog.