D.C. artist Adrian Parsons circumcised himself onstage. You can watch a video of it here, and here's a presurgery screenshot: 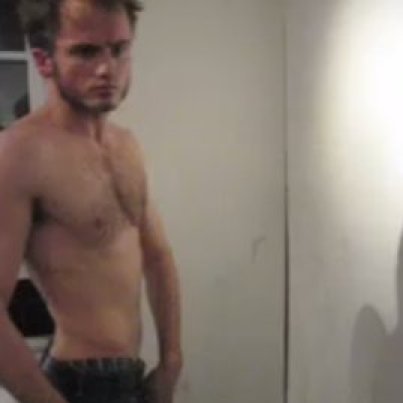 A few years after that -- in late 2011 through early 2012 -- Parsons went without food and drink, vowing not to end his hunger strike until Congress had granted the District of Columbia full voting rights, as well as budget autonomy. That goal wasn't achieved: Due to kidney pain, his protest was abandoned after 25 days with some chicken broth and honey-laced coconut water, while D.C. has yet to see full representation. But Parson's reputation as an endurance-oriented attention-getter was certainly enhanced. 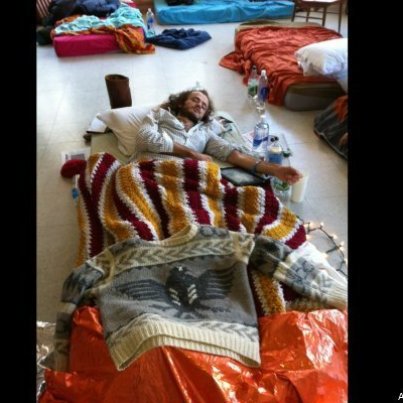 And if you're left wondering what projects Parsons hasn't pursued, wonder no longer: In conjunction with a show at D.C.'s Transformer gallery -- Parsons is living at the gallery for 48 hours; his show runs through July 20 -- he's put his inventory of eight years' worth of scrapped ideas in a Google document and is inviting interested observers to make edits.

A few ideas of note, from the Google doc (misspellings and all):

Shoot up a sterile 100 dollar bill in to vein. Shred, combine with IV fluid. Inject.

A house, fog machines everywhere, crystals, geodes, pantylines, poop-stained glass 3d dimensional Helvetia text, dodecahedral star written out in monkey teeth on the floor. Capes mandatory. MANDATORY Mardi Gras masks (hygeniene; festive)
Lead them in to the space. Invitation is acid blotter paper. To gain entry must ingest your invitation without anyone seeing or believing you.

NYT heist. Place fake newspaper with apocalyptic news for the theif of your regular NYT Sunday.

Run for office
effuse and debate only aesthetic issues

The Huffington Post caught up with Parsons by Gchat and email to find out more. (Some of Parsons' answers were transcribed by curator Eames Armstrong.)

It looks like you've got a lot of ideas to do with doing possibly harmful things to yourself, like injecting a $100 bill, and then some things that seem downright dangerous, like building a nuclear bomb. What made you reject these various ideas? Do you still think you might do any of them?

If they're not erased, I'll still do them. I really want an art collector to inject gold into my muscle fiber, and I've found a Canadian prescription for arthritis that is just that -- injectable gold in saline. What better way to restore value directly into the art market? Forgo the gallery, the artwork, the openings; just apply directly.

Some [ideas] were rejected by me, some by others. A backpack bomb placed outside of a gallery and full of the artist's CVs and calls-for-entry? Could work. Could also have you declared a non-citizen.

What was it like circumcising yourself onstage? And are you sick of people asking you what that was like?

I was trying to penetrate -- in, yes, a direct, literal way -- the gallery and the audience. I wanted to be organic shrapnel.

It's a phenomenon that happens with suicide bombers -- their tissue is embedded in surviving victims. It was -- well, I remember, really well, counting the cuts. Five from the knife in my hand and it was done. It was just that -- it was the action; everything else I was doing, or what was in the Warehouse Gallery with me, was less so.

In your list of ideas, you mention freezing yourself for many years, injecting yourself with foreign objects. Is there anything you wouldn't do? If so, what? If not, why not?

I don't really have an answer to this question. If something's a good idea, I'll do it. If it's a bad idea and is equally dangerous, I wouldn't do it.

Tell me about your new exhibition.

It started with this very refreshing program started by Transformer 10 years ago, Exercises. It's a residency for artists that specifically work within a medium or context for four months. The focus for this year's was conceptual art, which is like having a summer camp based around everything and nothing. You cry at camp, you have these intense meaningful relationships, and in the middle of it, you realize everyone you're sharing snacks with is a performance artist.

After three iterations of projects, EVERYNONE came out. It's as simple: Like Rauschenberg erasing a de Kooning, it seemed fine to let an audience edit everything I've ever done (and drafts, works in progress, bad ideas even) and let them destroy them.

So you can go to the gallery, see everything I've written on the wall, and destroy. I want the resulting gesture to be the audience's: the erasure, yes, but also the small rubber curls that will accumulate on the floor, the resistance worn to the eraser and the graphite that's left on the palm of a hand.

What is it about endurance that interests you as an artist?

Endurance can be a way to repeat a simple action and find out how it works, how to reduce writing to drawing lines, then wrist movements, then muscle movements, then just brain synapse firings. Warhol repeated to destroy the meaningfulness of an individual image; endurance performance can distill a gesture.

What have you been working on or doing since you stopped the hunger strike?

A couple performance-based projects, with Sebastian Rousseau as Kool Raunch Collective, and I have gotten back into making video installations and stand-alone works, incorporating motor oil and, dumbly enough, flowers. I've been more interested in making objects and sitting to the side of the objects. But as I say that, I'm placing a document that's very much insular on the walls of a gallery.

Are you still advocating for D.C. statehood? What form is that advocacy taking now?

I have not been as active -- I was troubled to see the [D.C.] Council be belabored by corruption on one hand and, on the other hand, an over-active oversight that has placed a distrust that I don't think is earned. Chicago, New York, Detroit have all seen their fair share of corruption in their municipal governments and yet don't face the same haranguing that D.C. seems to encounter in the media, the public eye, and from its colleagues in the federal government.

There have been gains, with the District's budget autonomy votes and Obama's ever so slight gesture of a fancy new license plate (#notaxworep), but the big wins are still the activists like Sam Jewler and Nate Bennett-Fleming. Sam and I are talking with Marion Barry after he reached out to the Occupy DC twitter on [July] 4th, so more is to come.

What kinds of reactions do you typically get to your projects? Do you get the reactions you are looking for or expecting?

Most of the time I get a visceral or befuddled reaction to the work that I do. So, for example, with a work for Hillyer Art Space, Raunch Beach, the reaction from the audience was stricken, somewhat gawking, and ultimately broke up a longstanding collaboration with myself and another artist. 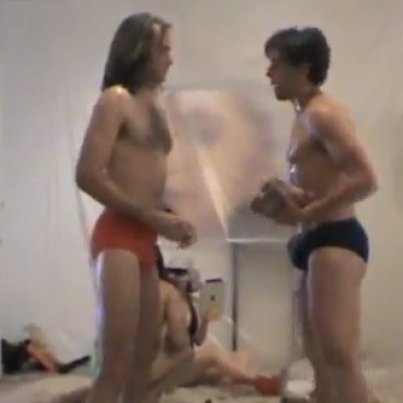 However, a work like Pistil, which was me crushing hundreds of carnations by hand in a video feedback loop, was just easier to look at-- which could be problematic if it also didn't satisfy me to just do and feel the accumulation of pollen on my fingers.

I would disagree with the premise to your question. Performance seems to be bizarrely one of the most popular mediums -- if you can call it a medium -- as seen by its inclusion in almost every major museum's programming in the last few years. Joe Hale, a curator at the Corcoran, and I have a theory that its popularity, just as it was in the '70s, is largely due to recessional draw-down that artists and museums have experienced. Less money for materials for the artists and less money institutionally for the museums, for things like insurance and shipping of works, opened up both times to performance in a big way.

Is your normal life full of unique exploits as well? What's a normal day for you like, if you're not on a hunger strike or circumcising yourself onstage? Do you watch TV?

I work at the Corcoran, which I love. I don't watch TV, but I did just finish "The Wire," and I can't believe Omar got got by that six-year-old in a convenience store, when he was just trying to get a pack of Kools.