Adriana Lima is a veteran of the Pirelli Calendar, the annual calendar shoot featuring the world's top models in various states of undress. But the 2013 edition will be different for Lima: the Brazilian model is posing naked... while pregnant.

Vanity Fair Italia has published a series of behind-the-scenes photos from the 2013 Pirelli Calendar shoot set. Most of the faces snapped by photog Steve McCurry are familiar, including Isabeli Fontana, Petra Nemcova and Liya Kebede.

Lima's growing belly, on the other hand, is a less familiar sight on a Pirelli Calendar set. The Brazilian model, already mother to two-year-old Valentina, announced her pregnancy in March and has made but a few public appearances since. And unlike her model peers, such as Alessandra Ambrosio and Sasha Pivovarova, Lima didn't take her top off for a nude pose during her last pregnancy (as far as we know).

Now Adriana's become the first pregnant woman to be photographed pregnant for the Pirelli Calendar. And while we've become slightly numb to the whole posing-naked-while-pregnant phenomenon (after Britney, Christina and Jessica, we'd say the concept jumped the shark), seeing a supermodel bare her swollen belly in what may be the sexiest photo shoot in the world is remarkable.

To see Adriana's incomparable body confidence (and belly) on full display, check out a sneak peek photo below and see more at VanityFair.it. What do you think? 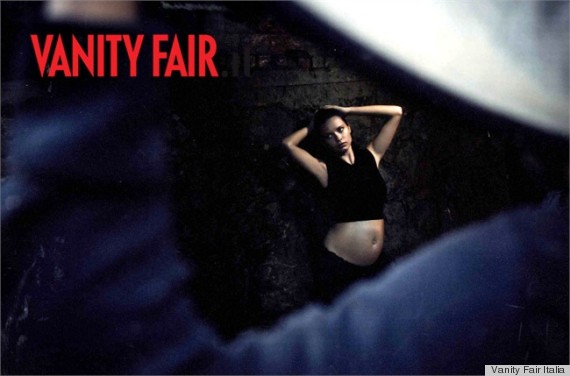