Adrien Brody has an electrician. That's what happens when a person spends nearly a decade renovating a castle. Back in 2007, Brody purchased the Stone Barn Castle, a historic dwelling in Central New York, as a place for him and then-girlfriend Elsa Pataky to call home. Armed with the hope of creating a permanent place for himself after feeling adrift following his role in "Brothers Bloom" (where he played a con man who felt adrift in his own life), Brody and filmmaker Kevin Ford set out to make ... something. The result is "Stone Barn Castle," a documentary about Brody's experiences with his house and an in-depth look at the actor's spirituality and worldview.

"It's a personal endeavor. We didn't quite know what we were engaging in," Brody, who speaks slowly and and with thoughtful pauses, told The Huffington Post in a recent interview. "We knew this would be a very long process and one that was very meaningful to me, but you need someone who is a real team player. Kevin was always able to be present, but it wasn't strictly in a documentary aspect. There was an element of artistry. We have a similar approach in how we look at things and find beauty. It's wonderful to look back and see that I had a friend to witness all of this challenging stuff."

The challenges Brody mentions run the gamut. The film -- which premieres at this year's South by Southwest Film Festival -- shows him dealing with contractors, juggling cement work and even vacuuming up water after yet another basement flood. Its early stages lean heavily on his relationship with Pataky, which ended shortly after the pair participated in a photoshoot at the castle in 2008. (Pataky married Chris Hemsworth in 2010.)

"The sharing of certain things that are personal is a challenge, I admit," Brody said when asked about showing so much of his own real life to the world. "But I believe the film represents this universal feeling we all have: We are all looking for a sense of home, we all have dreams and aspirations, and then life sometimes does not happen the way we expect it to. There are many blessings within all of that and there are obstacles to overcome. My life has been enriched by all these beautiful people who have been in my life. Therefore, sharing my own good fortune of these experiences is a beautiful thing. So I have to overlook certain aspects of it. I've got nothing to hide. All of this is an authentic part of the journey and I could not tell the story without all the elements in it." 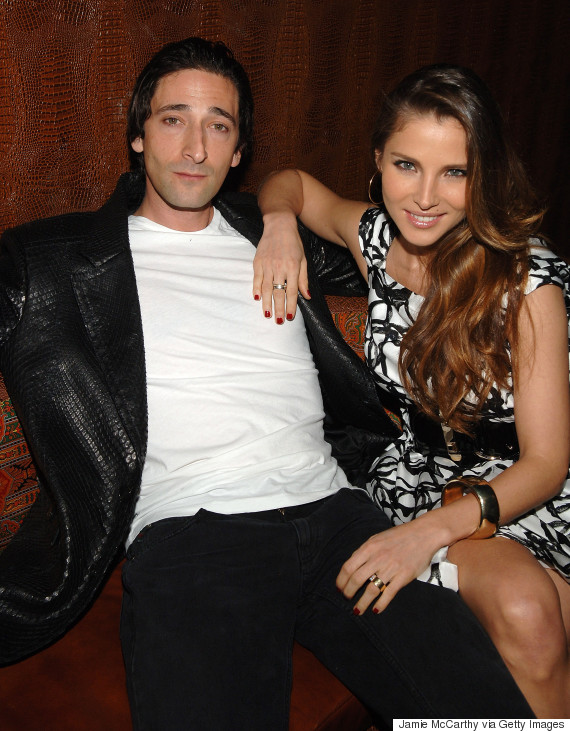 Adrien Brody and Elsa Pataky, photographed together in April of 2008.

The sequences with Pataky and the fact that Brody is shown across multiple years lends the film a very slice-of-life feel that could draw comparisons in format to Richard Linklater's "Boyhood," which was shot in installments over 12 years. Sure enough, Linklater is a friend and mentor to Ford, and gave the filmmaker a bit of advice that helped shape how "Stone Barn Castle" turned out.

"At one point, Linklater was just checking in on us and, as a friend, asked what it was we were telling with all this footage," Ford said to The Huffington Post. "We were still in the middle of the filming and it could have gone in some many ways, and focused on so many storylines, and he kind of interrogated us about the possible storylines. The one that we ended up with was something that when he heard it, he said might be a clue about where to focus in: the personal journey. It's funny, he was in the middle of this spanning odyssey himself. He probably related to this. Recently, he said it's kind of like Adrien had his own 'Boyhood,' of sorts. He was growing and changing over the years. He becomes a different guy by the end of it."

The change in Brody, who won an Oscar for "The Pianist" in 2003 and has seen his career go through good times (his collaborations with Wes Anderson) and bad (the 2013 disaster "InAPPropriate Comedy"), is one the actor will readily admit to having undergone.

"I think this experience changed me in more ways than I could put into words. It definitely made me a better human being and a man, because I had to own up to so much responsibility," Brody said. "The joy and the suffering I endured in this only enriches my being. To be an actor, you have to have lived. The more you've lived, the more honest you can be in the end. That's the goal."

And while there will likely always be something to fix, Brody's renovations on the Stone Barn Castle are relatively complete. The only problem now is finding time for him to actually live in the place he spent nearly a decade putting together. Brody is busy acting as well as producing, but he said there are no plans to sell what became his life's work.

"I don't think I'll come across this ever again," he said. "So I probably will just try and hang on until I can be like Coppola and kick back with my family. But right now, I'm still a young man and I'm still very ambitious and I have a lot of things I want to do. I'm producing films in China, I'm trying to make movies abroad. I find myself in these exotic places as new characters multiple times a year. It's lovely in the one sense that I have this place, spiritually, to go home to. I can meditate on the fact that there is a sanctuary for me to retreat to. I'm grateful for that. Part of that is relayed in the film: it's really about the state of mind that you can create. This helped me understand that. I hope to be able to enjoy it. I hope to have more time there."

Watch a teaser for "Stone Barn Castle" below. This year's South by Southwest Film Festival runs from March 13 until March 21.

Adrien Brody Spent 7 Years Renovating A Castle, And It Changed His Life
SXSW 2015