Call me old-fashioned, but I'm attracted to people who can make up their mind. People who have some idea of who they are, where they're going, and what they want out of life.

Forty years ago, I shared a flat with several gay men who had strikingly different personalities. While I'm just as guilty as others when it comes to procrastination, there are times when one looks at a friend and wishes he would simply shit or get off the pot. Let me explain:

One of my roommates could not walk past a mirror without spending 10-15 minutes checking his hair. One day, out of sheer frustration, I suggested to him that if we had plans to go anywhere, it would be better if I met him at the event instead of trying to leave our apartment together. "But why?" he asked in astonishment.

"Because at the rate things are going, I'm losing two weeks out of every year while you look at yourself in the mirror," I replied (tact was never my strong point). Thankfully, we were not in love or perceived by others as a couple.

I first heard Ronnie Gilbert sing the traditional Irish (or Scottish) ballad titled "I Know Where I'm Going" on an album by The Weavers. To this day, its honesty, simplicity, and the purity of Gilbert's voice never fail to touch my heart.

"He's a real nowhere man
Sitting in his nowhere land
Making all his nowhere plans for nobody.

Doesn't have a point of view
Knows not where he's going to
Isn't he a bit like you and me?

Nowhere Man, please listen
You don't know what you're missing
Nowhere Man, the world is at your command.

Nowhere Man, don't worry
Take your time, don't hurry
Leave it all till somebody else lends you a hand." 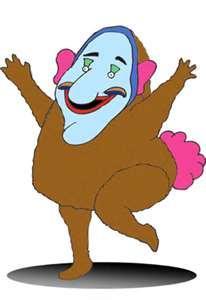 Jeremy Hillary Boob, Ph.D.
(the character from The Yellow Submarine
who is the quintessential "Nowhere Man")

Lennon's lyric can easily be applied to relationships that are starting to fall apart.

Two new productions dealing with the foibles of maintaining a relationship recently entertained Bay area audiences. In one, a conflicted bisexual man could not make up his mind about who he is or what he wants. In the other, people from different cultures chose to marry for some of the strangest reasons.

Crowded Fire Theater Company recently presented the world premiere of Christopher Chen's new play, The Late Wedding. Directed by Marissa Wolf (with excellent sound design by Cliff Caruthers), Chen's fanciful play was inspired by the writing of Italo Calvino -- in particular his novels Invisible Cities (1972) and If on a winter's night a traveler (1979).

Chen describes The Late Wedding as a "fluid play" (meaning that there can be anywhere from 3-16 actors playing a host of characters and couples). In the playwright's mind, several actors might even cycle through a single character. Gender, sexuality, and race can (and should) be endlessly interpreted and reinterpreted from one production to another (or even within a single production).

As the evening begins, Kathryn Zdan appears as a narrator who explains what the audience can expect of the play -- and of their own experiences during the evening. The basic premise is that the audience will be taken on an anthropological tour of imagined tribes and their marital customs.

A series of strangely intertwined interludes or vignettes, The Late Wedding starts to careen off balance as its curious exploration of distance, distraction, and inattention in today's heavily Internet-influenced relationships is interrupted by a playwright's random notes to himself ("Reactivate Netflix account!"). 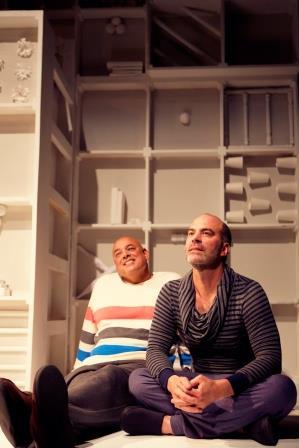 The audience first encounters two men from the Bakaan tribe (played by Lawrence Radecker and Michael Anthony Torres) whose relationship thrives on the language of nostalgia. As they recall the details of their numerous vacations in the Calaman Islands -- and try to recreate the emotions that they felt during those vacations -- their behavior resembles that of long-time couples who use old photo albums and slide shows to reawaken long dormant passions and moments of satisfaction in their relationship. 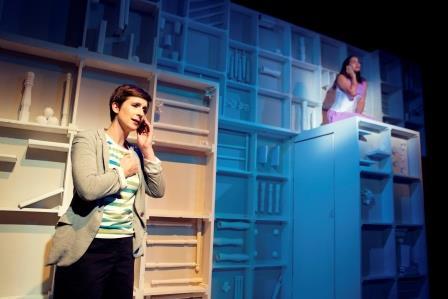 Kathryn Zdan and Lauren Spencer in
The Late Wedding (Photo by: Pak Han)

Attention then shifts to a couple (portrayed by Kathryn Zdan and Lauren Spencer) whose culture insists that the best part of marriage is the anticipation of the wedding day. After the ceremony, the newlyweds split up and go their separate ways (communicating primarily by text messages, long distance phone calls, and email). In fact, they may never see each other again (when one finally gets around to thinking about visiting her spouse, she learns that her partner died years ago). 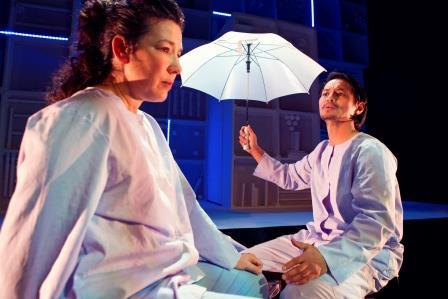 Michele Leavy and Ogie Zulueta in
The Late Wedding (Photo by: Pak Han)

A third couple (played by Michele Leavy and Ogie Zulueta) lives in a constant state of time warp, where a person could be alive today but, if he awakens tomorrow, his memory of what was today would be of a day that was dead (meaning that, like his memory, he might be dead as well). Or something like that. As the show's director, Marissa Wolf notes:

"Chen channels our society's collective unconscious with dizzying urgency. He is peeling back layer after layer of cultural practices and rituals, revealing a raw, pulsing interior of longing and hope. Implicit in his examination of structure and human consciousness is the very real portrait of a world in which all people, gay or straight, have the right to marry." 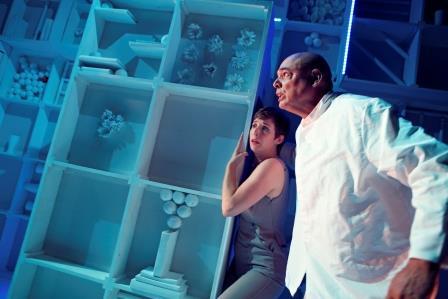 While I have great admiration for Chen's skill as a writer, I'm not always able to follow where he's going in some of his plays. The Late Wedding is frequently funny, disturbing, and poignant, but can also be confusing and lack focus. I would, however, urge people to see Chen's play for the opportunity to experience the stunning unit set designed by Melpomene Katakalos (who, together with Nina Ball, is one of the Bay area's most underappreciated talents). 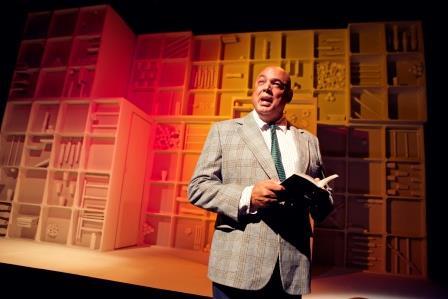 On January 29, 1966, when Sweet Charity opened on Broadway, its protagonist (Charity Hope Valentine) was a taxi dancer whose heart was frequently broken. Composer Cy Coleman and lyricist Dorothy Fields crafted a poignant second act number for Gwen Verdon to sing entitled "Where Am I Going?" Although many artists have since recorded the song, few have captured the vulnerability in Verdon's voice. Here's Diahann Carroll's interpretation of the song.

Nearly a half century ago, when Coleman and Fields were crafting this song, I doubt they thought of it as an anthem about the trials and tribulations of bisexuality. But if one listens to the lyric carefully, and then reads Charles M. Blow's intensely personal op-ed piece in The New York Times entitled Up From Pain, one gets a better understanding of the confusion that plagues some (but not all) bisexuals. 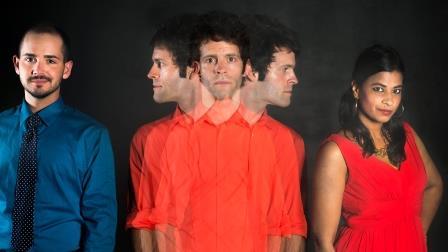 Beautifully directed by Stephen Rupsch on a simple unit set designed by Devin Kasper, Bartlett's play dramatizes the internal and external psychosexual struggles of John (Stephen McFarland), a young man who has been in a long-term relationship with "M" (Todd Pivetti). The audience quickly grasps how well the two men know each other by the accuracy with which they criticize and exploit each other's weaknesses. 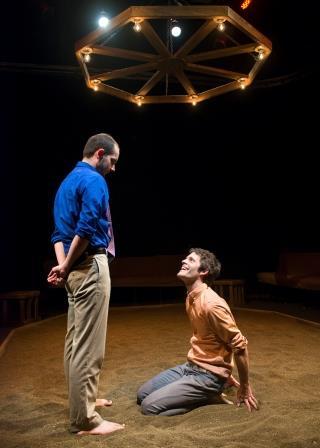 Todd Pivetti as "M" and Stephen McFarland as John in Cock
(Photo by: Lois Tema)

Their relationship is challenged by an external threat when John confesses that he's fallen in love with someone new: a woman. "W" (Radhiko Rao) has seen John every day on their commute to work. One thing after another has led up to his first contact with a woman's vagina and a new, and intoxicating exposure to the concept of gentle, loving sex.

Whether the urge to up-end the stability of a long-term relationship is triggered by the temptation of tasting forbidden fruit or the lust for one's fellow man, the concept of a romantic triangle is hardly new to the stage. However, the ways in which Bartlett lays out the boredom of going through the motions of maintaining a relationship, the pain of emotional alienation, the joys of discovery, and the intoxication of new love, makes Cock pulse, throb and erupt with a sense of urgency, doubt, and need that one rarely finds in gay theatre. 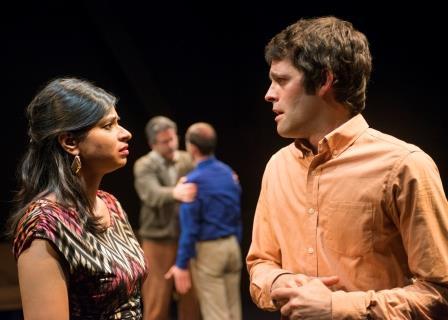 In an effort to force John into making a decision, "M" invites "W" to dinner so that all three can meet face to face. However, at the last minute he also invites his recently-widowed father, "F" (Matt Weiner) to join them as "a part of the family."

As emotions start to bristle, the father locks horns with "W," "M" asks John to move out of the house, and "W" finally accepts the fact that she can't turn John straight. However, as the play ends, John is left cowering in the garden, emotionally torn and silently crying from the emotional pain of his predicament. This, of course, leaves the audience wondering:

This was one of the strongest productions I've seen at NCTC in many years, thanks in large part to Stephen Rupsch's sensitive stage direction and Stephen McFarland's heartrending portrayal of the emotionally torn John. 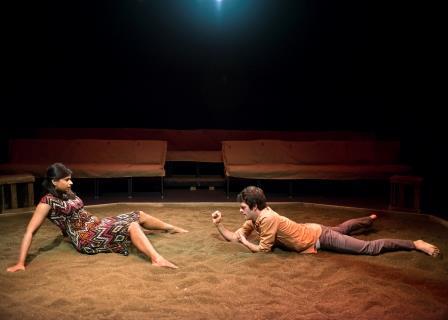