Landon Bryce, teacher, writer, artist and animator, has written a terrific book about what it is to be autistic: I Love Being My Own Autistic Self. You may know Landon from his blog, ThAutcast, and his Facebook page, ThAutcast, but I Love Being My Own Autistic Self is Landon using all his talents -- writer, artist and animator (though he doesn't sing and happens to have a wonderful voice) -- in one place. His characters, each very different from one another, discuss their strengths and challenges, while stressing self-respect. What follows is my interview with Landon Bryce. 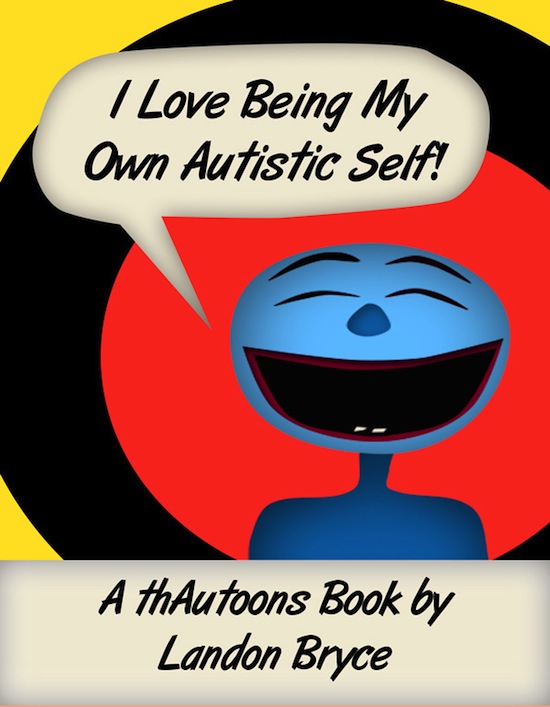 AZ: Tell me a about the book you've written, I Love Being My Own Autistic Self. How did it come into being?

LB: I had the idea for an autistic cartoon character named Vector several years ago. Many autistic people do not read comfortably and relate better to things that are presented visually, so I wanted to find ways to express important ideas that rely less on words. It took me a long time to figure out what Vector should look like and who his friends should be. I introduced them in a series of images on the thAutcast Facebook page this summer. People responded very positively, and my friend Jennifer Sheridan encouraged me to put them together into a little book.

After several false starts, I found an approach to writing the text that I liked when I stopped trying to write about the cartoons and let Vector speak for himself. Several of my friends, both people who are autistic and people who have children who are, helped me shape the book and figure out what needed to be in it.

AZ: The main character's name is "Vector" -- is this significant?

LB: In graphics, vectors are virtual lines that connect points through defined relationships. The character Vector is my attempt to help readers feel a relationship with the points I am trying to make. And of course, he is constructed from vectors, so it's sort of like naming your dog "Dog."

AZ: Another character in your book is named Marko. I love how you introduced him by writing, "Marko is the sound that means me." Can you talk a bit more about Marko?

LB: Marko is Vector's best friend, and he is nonverbal. He's based on students I've worked with and the kids of friends of mine who don't talk yet. These are wonderful, fascinating, fully human people who are often talked about as though they are less than that. Amy Sequenzia, who uses assistive technology to communicate, was kind enough to make some very helpful suggestions on the text. I tried hard not to minimize the challenges that people like Marko face but to encourage people to reach out and include them.

AZ: How much of the text is drawn from personal experience?

LB: Some of it certainly is -- for example, what Vector says about how difficult it is for him to deal with loud noises or other overwhelming sensations is pretty much me. So are the things about how hard it is for him to get along with other people. But for the last few years I have interacted every day with autistic people and their families through my website, thAutcast, and Facebook page. Adam Bailey, who has Asperger's syndrome and whose son has autism, described the book this way: "Landon Bryce has filtered the voices of thousands on his website through his brain and found a simple way in doing so." That's certainly what I tried to do.

AZ: Yes, I think you were successful! At one point Vector talks about how some people are uncomfortable when he talks about the positive aspects of being autistic. Explain what you mean in more detail when Vector says, "They might think I am saying that I don't think autistic people need support or treatment, but I think those can be good things."

LB: The iPad and other devices are allowing many autistic people to communicate in ways that they could not before, and I think that's great. Supports that make the challenging parts of autism less disabling are wonderful things, and we need more of them. Because a lot of the treatments that have been used on autistic people have been damaging, ineffective, or both, many self-advocates sound, to casual observers, like we oppose treatment for autism. I think we need to devote much more energy to researching treatments that will help autistic people communicate effectively and learn things that are hard for us. I guess it's not surprising that a teacher like me thinks we could get the best results for autistic people by investing in education.

AZ: Why do you think education gets so little "screen time" compared to the various autism treatments in the news?

LB: Mostly, I think it's because people don't understand what autism is or how education works. I believe that, at its root, autism is a tendency for the brain to make connections in unusual ways -- some very strong and very numerous, others weak and unreliable. What happens in your brain when you learn something is that you create an actual physical connection between that new learning and stuff you already know. There is a reason that Applied Behavior Analysis is the treatment that is considered most effective for autism so far. It's a very powerful educational technique that is forcing the growth of reluctant neural connections. The trouble is, ABA works because it's strong, not because it's specific to autism. It's like washing everything in your house with bleach -- it will all be clean, but some of it will be damaged. We have done very little research into educational methodology for autistic people, but, if we seriously studied the subject, we might be able to teach autistic people in ways that help those weak and unreliable connections to grow strong.

AZ: Landon, thank you so much for agreeing to this interview. I love your book and think others will find it as insightful as I have. I Love Being My Own Autistic Self also makes the perfect holiday gift!

People can buy both the ebook and the paperback on Amazon by clicking on the links provided. 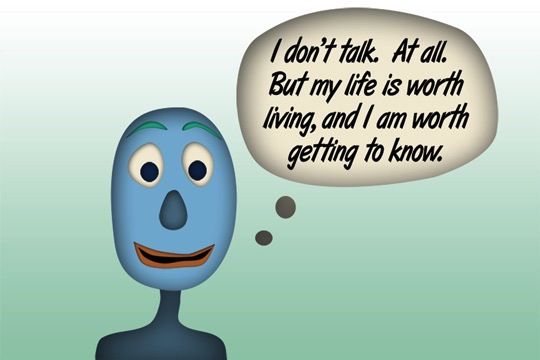 More:
healthy livingbook newsadults with autismAutismautistic
Newsletter Sign Up
The essential guide to taking care of your mind and body
Subscribe to HuffPost’s wellness email
Successfully Subscribed!
Wellness delivered to your inbox