Adult bullying is more prevalent than many want to admit. If you're old enough to pay a mortgage or raise a family, shouldn't you be able to handle anything that comes your way? But bullying doesn't come to a standstill after graduating from the playground, and giving grown-ups a pass on aggressive behavior only sets a bad example for our children still on the playground.

A while back, I discussed the case of a parent who felt the need to air her laundry (dirty and clean) all over her Facebook timeline. Her thoughts were broadcasted publicly, even for her children to see. Additionally, a group of mothers recently took to Facebook to bash pictures of toddlers. These behaviors make kids think: if my own mother can bully, then why can't I?

In case we needed another reminder that no one -- not even 300-pound offensive linemen -- is immune to being victimized look no further than the Jonathan Martin case earlier this month. Bullying is entrenched in the NFL, as is the idea that what goes on in the locker room, should stay in the locker room -- including hazing. The incessant tormenting from Martin's teammate, Richie Incognito, forced him to take leave from the team and admit himself to a hospital for emotional distress.

Young athletes and children look up to these major league athletes. Allowing this culture of "manning up" to be the status quo is effectively letting kids know that harassment is acceptable in sports.

Just toughen up. Isn't this what some parents communicate to their kids when they are harassed by a fellow student or teammate?

Last week, an article from SFGate shed new light on workplace bullying. Over one-third of our country's workforce has experienced bullying, according to the Workplace Bullying Institute, and 72 percent of the cases are instigated by a superior, boss, or supervisor.

How can we possibly rationalize this behavior in adults? It's indisputable that grown-ups should know better, and the fact that they continue to harass is despicable. And today, bullying often happens online, which creates a long-lasting emotional sting.

Cyberbullying allows cruelty at all ages to play out in a 24-7 arena. I have felt, and survived, the pain of being a victim of adult cyberbullying. We always hear about how brutal children can be, but if you consider "toddler bashing" mothers, Richie Incognito, as well as certain workplace superiors you will soon realize that plenty adults are downright malicious. 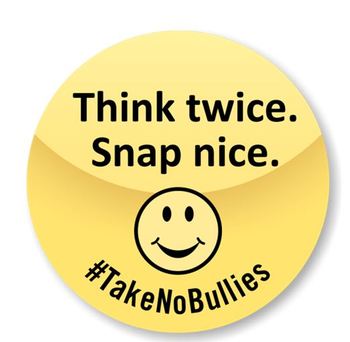 Your keyboard can be used as a lethal weapon today, and sadly more adults have caught on. Replace those cyber-bullets with words of kindness. As a grown-up you need to lead by example. Every post you make public, every text message you send, every email you write, should exhibit respect for yourself and others.

Thankfully, there are reasons to be optimistic amidst all of the negativity in the news. Many kids are already learning that it's cool to care at all ages, and that combating cruelty with kindness isn't all that difficult. From teachers, to students, to entire communities -- parents can make a difference by acting as cyber-shields .

• Speak and type with respect, because words wound.
• Be a digitally conscious adult and learn more about digital citizenship.
• Educate yourself on tips for dealing with workplace bullying. Even though you might not be a victim, you should know how to react when you encounter harassment in your office.
• NFL players should take a lesson from Middle School Football Players.