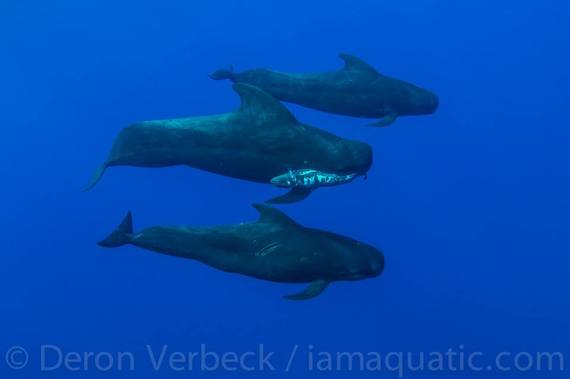 In July Deron Verbeck , free-diver and award winning underwater photographer, happened upon a group of pilot whales while on a photoshoot with National Geographic. The adult male carried the corpse of a dead baby, and the group swam by in what Deron called a "heavy and heart wrenching scene":

There is little question in people's minds that dolphins and whales are sentient beings - a fact that is supported by countless observations and scientific research - and nowhere is it more touching that in their response to the deaths of their young. While scientists are hesitant to use words like 'mourning' or 'grieving' in describing animal behavior, it is evident that whales and dolphins experience those emotions.

I Am Aquatic - Deron Verbeck
Yesterday at 7:13am ·
Pic of the Day: I'm just going to call this "The Procession".

Back in July I had the pleasure and honor of meeting and working with Brian Skerry world renowned National Geographic photographer. We came upon a scene that he, Jeff Hester, Scott Blain and I were the only humans to witness that day. We only did a couple drops just to document the encounter and then left them alone to mourn. I didn't call anyone else out of respect for the animals to be left in peace.

There have been many reports and photo documentation of whales and dolphins carrying and "mourning" their dead offspring, but for me this was the first time I had encountered it. It was a pretty heavy and heart wrenching scene as the whales slowly passed by carrying their dead calf.

All three animals have been identified by Dr. Robin Baird of Cascadia Research Collective. What he knows is that they are all from the same "social group". What he believes is that (from top to bottom in the image) the top animal is the adult mother of the bottom animal (although no genetic samples have been taken they have been photographed numerous times side by side since 2008 and mothers and female calves will stay together their entire lives) and the dead calf is the first offspring of the bottom animal.

The bull that is carrying the calf may or may not be the biological father (only genetic sampling would have proved that). It is rare (but not unheard of) for the bulls to carrying the calves and there are very few images of this.

As a free-diver, Deron can dive to a depth of 275 feet and hold his breath for 8 minutes, giving him the opportunity to share the ocean environment in an intimate way with whales that few of us can experience. While boaters who have witnessed whales and dolphins in mourning have reported a similar awe at the sight, boats are intrusive...and it is hard to resist wanting to get closer which poses unintended risk to the whales. 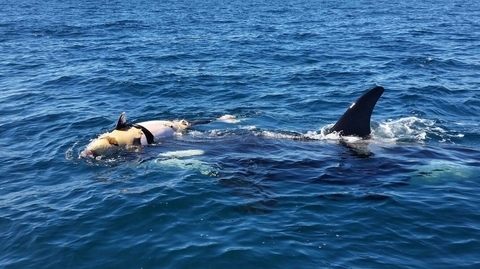 Recently, killer whale expert Dr. Ingrid Visser observed a mother killer whale pushing her dead calf for 22 hours before thoughtless boaters drove the mother from the carcass. "In the time we followed her, she was only metres away from the calf that she was pushing ahead of her in the wind and current."

Dr. Visser explained that the New Zealand population of orcas can spend as long as two weeks with their deceased calves, and admonished boaters for failing to observe federal laws on boating around whales - not only did the boaters interfere in the mother whale's mourning, but a later necropsy revealed that the baby had most likely been killed by a boat. The New Zealand Herald

As difficult as it must have been, in an encounter with a bottlenose dolphin and her dead calf, Dana Point Whale Watching demonstrated restraint and respect as they briefly observed and then chose to leave the mother to mourn.

Published on Mar 27, 2013
Dana Wharf Whale Watching came upon this bottlenose dolphin, She is carrying her dead baby on her back, hard to imagine how long she will do this for or how long she was doing it for, she is mourning her baby we left her in peace to mourn! What we see in nature is often beautiful and amazing. Today we can just be sad for this baby dolphin and the mother.

Our hearts go out to grieving whales and dolphins when we see them with their dead young ones, especially since our activities make their survival difficult in the first place. Staying a respectful distance away isn't just the law, it is the right thing to do.