When children are young, they're playful, unself-conscious, and uninhibited. That's one reason why they're such fast and voracious learners, constantly seeking out new experiences to engage their minds and imaginations. In that sense, play is productive for kids. As grownups facing bulging inboxes, overflowing calendars, and a whole range of adult responsibilities, playing around isn't something we do much of, to say the least. But new research is tapping into the relationships between play, performance, and productivity -- and showing us there may be real value to taking a break from our work to, well, go out and play.

WHY PLAY IS PRODUCTIVE

Stuart Brown, founder of the National Institute for Play, has spent his career studying play and its positive effects on adults. He's consulted for Fortune 500 companies on how to incorporate play into business settings and has used play therapies to help people struggling with clinical depression.

In his book, Play: How It Shapes the Brain, Opens the Imagination, and Invigorates the Soul, Brown argues that play even has the power to make you smarter.

"During play, the brain is making sense of itself through simulation and testing," Brown writes. "Play activity is actually helping sculpt the brain. In play, we can imagine and experience situations we have never encountered before and learn from them."

Playing, in other words, has a direct role in creativity. "The genius of play is that, in playing, we create imaginative new cognitive combinations," Brown continues. "And in creating those novel combinations, we find what works."

Most complex problems adults face in life as well as work require creative solutions, even if we don't see them that way. Not only can play help jumpstart that creative problem-solving process, it can shake us out of the cognitive habits that are holding back our performance at so many other levels.

To be fair, advising grownups to go out and play will elicit some giggles -- "Come on, you want me to stop working so I can do what?" -- but if you get into the habit of incorporating play into your life, the results might speak for themselves. Here are a few super-simple ways to start. 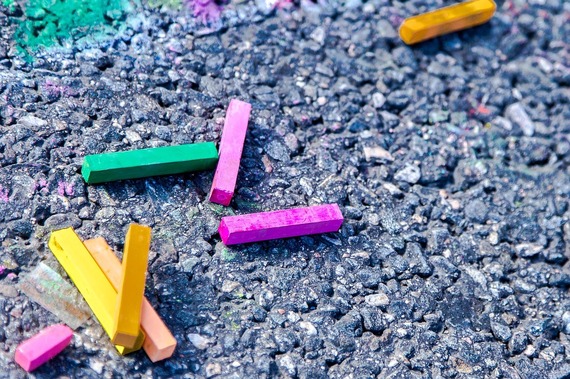 Download Tetris to your phone. Each time you feel the impulse to check your social media feeds, go play a five-minute game of Tetris instead. Why? Not only is it fun, but playing games can help you maintain focus and lengthen an attention span that your Twitter feed is out to relentlessly shorten.

According to Jane McGonigal, Ph.D. and author of SuperBetter: A Revolutionary Approach to Getting Stronger, Happier, Braver and More Resilient -- Powered by the Science of Games, getting a firmer control on your powers of attention is a crucial first step to improving your productivity. "Playing games is not a waste of time," she writes. "It is a skillful, purposeful activity that gives you direct control over your thoughts."

Adult coloring books have stormed the market this year -- and for good reason. Picking up some crayons, markers, or colored pencils is a tamer way to unlock your play impulse. And like playing certain games, it can also help you refocus your attention.

As Brown explains, play is a state of mind, not a specific activity. As long as it's absorbing, essentially purposeless, and lets you enjoyably suspend your self-consciousness and sense of time, it counts. Go pick up a coloring book, turn off all your push notifications, and color one picture. After all, when was the last time you did that? It will take less than five minutes to complete, and chances are you'll feel a little restored and relaxed when you go back to your tasks. Not to mention you'll now have some art to put up on the fridge.

3. HAVE A SOLO DANCE PARTY

Yes, you read that correctly. It turns out science has finally vindicated what just about every romantic comedy of the past several decades has understood about the cathartic power of dancing alone. Crank up your favorite song and just dance it out. The point isn't to showcase your Beyoncé-level talents or shame your lack thereof -- it's just to let yourself be uninhibited without fearing anyone else's judgment.

When you dance alone, simply for the sake of play, your body will take the lead over your mind. As Brown explains it, play is one of the most basic evolutionary impulses, and physical movement can be a powerful mechanism to recall it. So get up and dance. You'll not only feel better, you'll be doing your brain a favor as well.

4. SING IN THE SHOWER

Same principle, different activity. Turn on the water, pick the first song that comes to mind, and start singing as loudly as you can. It sounds silly, and it should -- that's the point. Singing in the shower is a purposeless activity that provides enjoyment, a suspension of self-consciousness, and time. If you're stuck in traffic, it works almost as well.

Here's the thing: As adults, one of the biggest roadblocks to being playful is that we worry that we'll look undignified, irresponsible, or immature. But you can't be open to spontaneity if you aren't comfortable with testing new ways of expressing yourself--even the most unserious of them. And when you foreclose that possibility, you miss out on a whole host of cognitive benefits children access multiple times each day.

Watching Game of Thrones is entertaining, but it's a passive experience. To be sure, sometimes those are good, but they won't re-energize you in quite the same way as a play-based activity can. Invite some friends over for charades (just like your parents' generation used to do, before they invented HBO), or just play "Go Fish" with your 5-year-old. Whatever it is, you want to find yourself absorbed in the game. In fact, it only has to last five or 10 minutes in order to stimulate your brain.

The fact is, play is powerful. According to Brown, psychologists are even uncovering a correlation between resistance to neurodegenerative disease and sustained use of puzzles, playful exercise, games, and other activities. On a more immediate level, it taps into parts of your brain that, when you make time for play more regularly, can improve your performance and productivity in other areas of life.

As we figured out when we were children -- before we forgot about it -- play is joyful, energizing, and helps us learn. It was our primary language for making friends, telling stories, and solving problems. Imagine if you brought that power back into your life. In fact, don't imagine it -- go out and play.

This post was originally published via Fast Company on October 1, 2015.