This may be one endorsement Newt Gingrich wishes he didn't receive.

Ashley Madison, a "pro-adultery" website whose slogan is "Life is short. Have an affair," put up a billboard in Bucks County, PA, that "endorses" Newt Gingrich for president. Gingrich has famously admitted to extramarital affairs in the past.

The billboard boasts a large picture of Gingrich, with the text, “Faithful Republican, Unfaithful Husband. Welcome to the AshleyMadison.com Era."

This comes only a few days after Gingrich endorsed a "marriage pledge" that disavows adultery. (Clearly, a "wedding" was not politically urgent enough in the past.)

According to The Morning Call, site founder Noel Biderman explained further in a statement:

Now that Newt is the leading contender in the race for the GOP nomination, we felt compelled to make a point to illustrate how times have changed when a serial divorcee/adulterer is capturing the hearts of the American people.

Gingrich proves that marital fidelity has no bearing on someone's ability to do a job. Rather than judge him, Americans have finally embraced the reality that affairs are commonplace, and perhaps paradoxically, might be an indication of great leadership to come. He is not the first nor last politician who will step outside of their marriage.

The Morning Call also reveals that the company chose the non-politically imminent Pennsylvania to put up the billboard as it's the only state to see traffic fall over the last month. 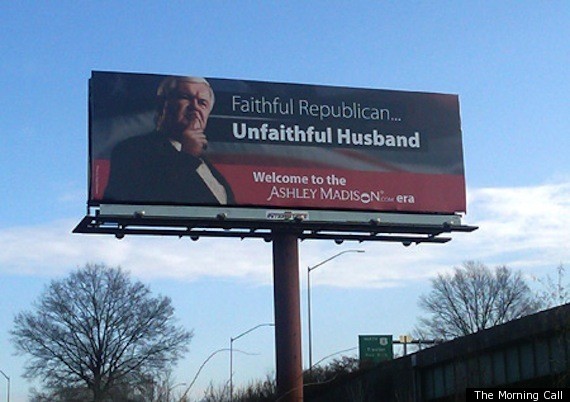