Over the past 10 years, an amazing amount of awareness has been raised for children with autism -- but, once those high school doors close, parents find themselves in a bind. The amount of programs and funding available to young adults drops dramatically once they age out of the system, and parents are often left struggling to find a place where their child can continue to socialize and work towards finding a job within their community.

Autism affects a person's ability to process information and understand social situations. Reading social cues and understanding how to handle many situations are a challenge. Often, others have no idea how hard it is for someone with autism to answer a simple question, so they often become frustrated and walk away.

Without support, Jessica Earnhardt had an incredibly difficult time transitioning to college. Jessica, now 31, didn't qualify for the developmental disability programs available to individuals with autism in various counties. She was so overwhelmed by anxiety that she had to drop out -- twice. Aside from classwork being overwhelming, social interactions were too difficult to process.

"I didn't know what I was doing wrong. I'd laugh for the wrong reason and didn't understand what people were doing. It was like there were hidden rules," she said.

Her mother, Karen, said she got panic attacks and was easily overwhelmed.

Karen tried for five years to find a program that would take Jessica, who is high-functioning, under their wing. In the meantime, Jessica stayed home alone, watching TV and reading.

In 2012, Karen finally came across the IGNITE program, a community center model for adults with high-functioning autism and Asperger's Syndrome operated by the Autism Society of North Carolina.

She didn't hesitate to drive her daughter to and from the center two hours each way and wait for her during in the interim.

"The same day that she went to IGNITE, she had dinner with seven people," said Karen. "After her first day, she told me, 'Mom, I found my people.'"

Jessica recently returned to Central Piedmont Community College to finish up her second semester, and has moved from her family's home to her friend's home, where she rents out the basement apartment.

"The social skills center here taught me how to use gestures and make small talk and do all these little things I was missing," Jessica said.

Every Friday, she volunteers at PetSmart and helps care for the cats that are up for adoption, and she is now working in estate sales and mentoring newer members.

College was not an option, however, for 18-year-old Zachary Monroy of New Jersey, and high school graduation was a terrifying prospect. As the big day drew nearer, he began digressing to behaviors his parents hadn't seen in a while, like self-mutilation. He picked at his body until he bled.

"The more he was told how great it would be to leave school, the more anxious he became.
He lost entire nights of sleep," said his mother, Karen. "All he heard was that he would no longer be able to attend his 'home' of eight years, and his schedule was important to him."

Most of the support he was accustomed to was only available in New Jersey public schools, and finding a day program was next to impossible.

There were very few choices, and what choices are available are inconsistent at best and often bleak. Who wants to sit at a table and put pieces of things together all day? Or only be allowed to fold towels? Or be cloistered from the world while you work?

In New Jersey, she explains, law changes to the Division of Developmental Disabilities prevented a budget from being used for the therapies Zachary was used to. His budget can't be used for speech, occupational or physical therapies, things he needs to get and maintain a job.

You have to get a budget for the few programs out there, she says, and even then, waiting lists are very long. You must be Medicaid eligible to get a budget, and that's a barrier that excludes many who can't navigate the legal maze.

Last October, she and some other parents with the same problem put their heads together, and decided to found Abilty2Work, a nonprofit that operates in a restaurant called Baker's Treat in Flemington, New Jersey. There, 38 adults with autism spectrum disorders get to work, job train and be employed at their own pace. 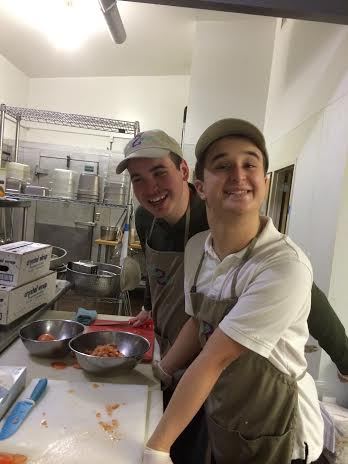 Parents are also required to volunteer at Baker's Treat for 16 hours a month, which Karen says helps build a community for all. Currently, there's a wait list of 212 individuals awaiting admission.

These days, Zachary, does everything from bake to table-tend, interacting with strangers and staff alike. Especially rewarding is the fact that young adults get to see the fruits of their labor and interact with customers who appreciate what they're doing.

For most of these kids, people see a list of what they can't do, and they're not even given the chance to try. Here, they get one. We're teaching these individuals that they have the right to seek meaning in their lives.

She continued, "Last week, Zachary told someone that he's going to run Baker's Treat one day. The fact that he thought to aspire to that, well, we're blown away."