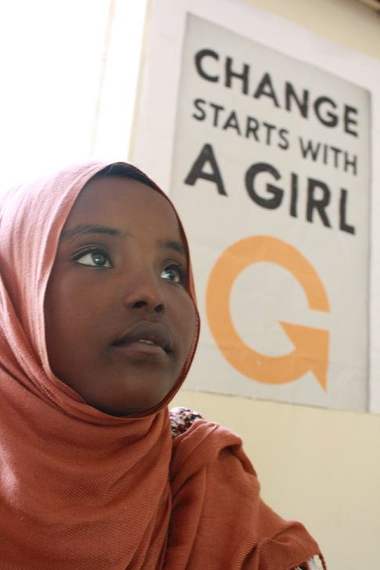 On 17 February 2015 in Nairobi, the President of Kenya, Mr Uhuru Kenyatta a passionate advocate for the advancement of youth and empowerment of young people, presided over the launch of the Global All In! Campaign, a partnership aimed at consolidating efforts against HIV/AIDS among adolescents.

The President remarked, "At a time when our nations are looking forward to unprecedented growth and change, we have the blessing of young and able people to drive development. But HIV and AIDS burden on this group threatens to rob us of this promise,"

This worldwide drive brought together several UN agencies, civil society organizations and donors to reduce new HIV infections among adolescents by at least 75% and increase HIV treatment to reach at least 80% of adolescents living with the virus.

This important initiative is crucial for Kenya. For many girls and women in the country, gender discrimination is all too common. The available data suggests that one in four girls and women in Kenya between the ages of 15-49 underwent female genital mutilation (FGM). Taken together, the alarming statistics of child marriages and gender-based violence, early pregnancies and high maternal deaths, as well as HIV infections reveal a particularly vulnerable subpopulation - the adolescent girls of Kenya.

According to a 2011 report by the Ministry of Youth Affairs and Sports and the United Nations Population Fund (UNFPA), the AIDS epidemic poses a serious threat to the health of Kenyan youth. Young women between the ages of 15-24 years old are four times as likely to be infected with HIV as young men in the same age category - a gender ratio that has not improved over the past ten years.

Successive Demographic Health Surveys suggest that rates of teen pregnancies and motherhood, a major health risk to teenage girls, have changed little since 1993. To be an adolescent girl in Kenya is to be a potential victim of exploitation, and we must stand up against this especially vulnerable demographic, specifically focus on the health of the Kenyan adolescent girls from early on. Ending Adolescent AIDS

Although some efforts have been taken to stem the rising tide of HIV infections among young people, success is limited, and adolescent girls are at a clear disadvantage. The National AIDS Control Council found that, between 2009 and 2013, the number of people living with HIV increased from 1.6 million to 1.9 million, with adolescent girls disproportionately infected.

Early marriages and pregnancies have a substantial role in this disparity, and it is no surprise that Kenyan woman face such a high maternal mortality ratio - of 488 per 100,000 live births. For example, more than one out of four young women is married by age 18, increasing their likelihood of having children at an early age. Nearly one out of three young married women has an unmet need for family planning, meaning they wish to delay childbearing, but are not using any method of contraception, and are at risk for having an unintended pregnancy.

Often marginalized by society, teenage girls infected with HIV are confronted with prejudice and discrimination in seeking medical services. People living with HIV are stigmatized, with less than half of men and women expressing an accepting attitude towards them - one obstacle to the nation's response to HIV infections.

It is imperative that we at the United Nations together with the Government of Kenya and civil society organizations help the adolescent girl by empowering her to make good decisions for her own physical and sexual health. As both claim holders for public services and key actors for Kenya's development, the youth of Kenya are in a strategic position to contribute to the well-being of their country and realize Kenya's demographic dividend.

UNFPA's Executive Director Dr Babatunde Osotimehin in his video address at the launch of the Global All In! Campaign said, "One thing is certain: Every girl, no matter who or where she is, has the right to bodily integrity, to sexual and reproductive health, and to take decisions about her sexuality and reproduction free from coercion, discrimination and violence. She has the right to be engaged in decisions that affect her life."

We must stand up for the rights and dignity of every adolescent girl.

UNICEF, WHO, UNAIDS and UNFPA are All In and we will work with the Government of Kenya and all partners to protect the human rights, sexual and reproductive health and rights, and to support all adolescents in preventing and treating HIV.

After all healthy adolescents also make healthy mothers and therefore preventing HIV infections is one pathway to reducing the high maternal mortality and infant deaths.

With political commitment at the highest levels, the Kenya's First Lady's Beyond Zero campaign and the signing of a communiqué by 15 County Governors of Kenya with the highest burden of maternal deaths to advance adolescent health, Kenya indeed can lead the way.