By Oscar Arias and Vartan Gregorian 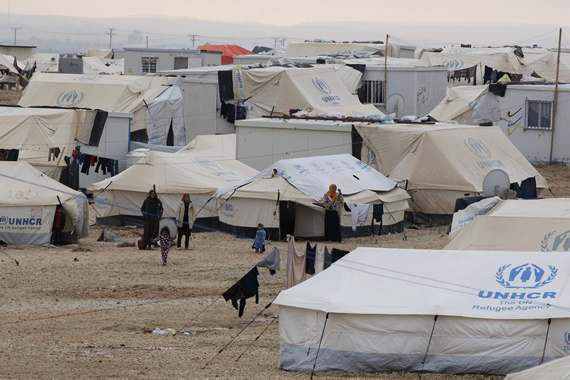 Every day we are inundated with harrowing stories of desperation from refugees around the world. From those risking everything to cross the Mediterranean or the English Channel, to the 83,000 people who now inhabit the Zaatari refugee camp, too many people are grappling with too many unknowns: Where will my next meal come from? Is there a doctor to treat my son? Will I ever return home?

Among all these heartwrenching unknowns, there is one unavoidable fact: The number of refugee camps like the Zaatari is growing every year around the globe. A recent report from the U.N. High Commissioner for Refugees finds that almost 60 million people -- over half of them children -- have been displaced by conflict. That is roughly 13 times the population of Costa Rica alone. In Latin America, the number of Colombian refugees decreased over the past year, but the country continues to have one of the world's largest internally displaced populations.

We must act with solidarity to reverse this trend. All nations have a moral obligation to assist people fleeing persecution, conflict, and hardship.

Thankfully, there are people fighting for the rights of refugees, the homeless, and the stateless around the world. It is important to honor humanitarian heroes and celebrate the impact of benevolent work -- as the global community is doing on August 19th in recognition of World Humanitarian Day. In this spirit, we must also use our collective resources to extend and amplify humanitarian efforts.

Sérgio Vieira de Mello is a powerful example of what's possible. Sérgio, who served as U.N. Undersecretary-General for Humanitarian Affairs and Emergency Relief Coordinator, was killed -- alongside 21 aid workers -- in a suicide bombing at the U.N. headquarters in Baghdad on August 19, 2003. Sérgio was an inspiring advocate of human rights who dedicated three decades of his life to forging peace and aiding refugees in the world's most war-torn, devastated regions, including Bangladesh, Sudan, Bosnia, Serbia, and Mozambique.

It is important to commemorate those who, like Sérgio, perished while striving to aid the destitute. Indeed, it was they who inspired World Humanitarian Day, which is held each year on the anniversary of the Baghdad attack.

Today, more than ever, we must also empower rising leaders to address both man-made and natural disasters. The world needs more humanitarian heroes. And yet, around the globe, resources are scarce.

Recently, the U.N. confirmed what it called a "paralyzing" funding gap that has shuttered 80 percent of basic healthcare services in Iraq. Previous cut-backs there have already reduced access to food rations, water supplies, sanitation, and hygiene services. Poverty rates have doubled in the Kurdistan region, a safe haven for displaced Iraqis. Now more than a million people, including 500,000 children, will lack primary medical care.

We need to honor humanitarian heroes who are making a difference despite these tall odds -- and, to the extent possible, motivate others to work toward making a substantial and consequential impact. We're proud to be helping do just that as members of the selection committee for the Aurora Prize for Awakening Humanity, a new global humanitarian award to be given annually to people who put themselves at risk to enable others to survive and thrive. In fact, the award was created by descendants of those who survived the Armenian Genocide precisely because someone took great risks to help them.

Nominations are being accepted for individuals who have advanced the cause of humanity despite significant challenges. The award also will accelerate the cycle of good work by offering a $1 million grant to an organization that inspired the recipient -- helping to support the efforts of other champions of courage.

No one on the front lines of humanitarian work is in pursuit of recognition or money. Yet, to venerate them by offering both is a sure way to truly commend them and inspire others to follow their example. Instead of skyrocketing numbers of refugees, we envision a world with increasingly high numbers of humanitarians -- and fewer destitute people like those in Jordan's Zaatari camp, who struggle with unknowns no one should have to face, anywhere in the world.

Oscar Arias was the president of Costa Rica from 1986 until 1990 and again from 2006 through 2010. He was awarded the Nobel Peace Prize in 1987 for his work putting an end to the civil wars that ravaged Central America. Vartan Gregorian has served as the president of Carnegie Corporation of New York, a grantmaking institution, since 1997. Previously, he was president of The New York Public Library and Brown University.

This article was originally published in the Miami Herald.