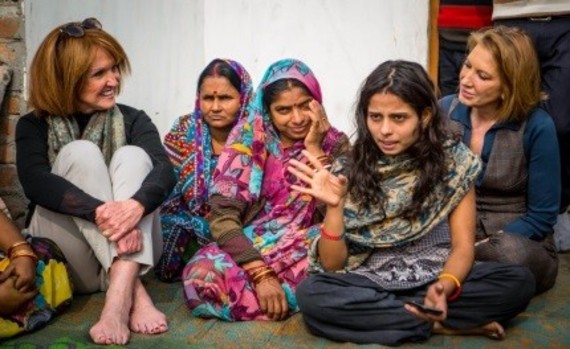 I saw an interesting report recently from the International Labour Organization that lists the percentage of women working in managerial positions in 108 countries. I was surprised there are only three countries--Jamaica, Colombia and Saint Lucia--where you are more likely to have a female rather than a male boss.

The report also lists the most common barriers to women becoming leaders, including that women tend to have more family responsibilities than men, they suffer from stereotypes and lower social status in many countries, and they lack access to leadership training and other opportunities to develop their skills and knowledge.

In my role as Global CEO of Opportunity International, I've found the greatest challenge facing women in places like Rwanda, the Democratic Republic of Congo and the Philippines is lack of access to basic financial services such as loans and saving accounts. About 90 percent of our 10 million clients in 22 countries are women. Through loans, business training and other financial services, we help them launch and expand businesses to break the cycle of poverty, transform their lives and strengthen their families and communities.

One of the things I like most about my work is traveling to Africa, the Philippines and other areas in the developing world to meet clients and see our programs in action. One amazing woman I met recently is Neetu, a young entrepreneur in the Badarpur area of New Delhi, India.

Neetu enjoys sewing and had an idea for a company that manufactures seat covers. But her husband and in-laws told her to stop dreaming. They knew none of the local banks would give her a loan to start a business and told her they didn't think she'd be successful anyway.

But Neetu believed in herself--and we believed in her. Over the next four years, we gave her three loans totaling about $950 and today her business is booming. Best of all, she's creating jobs in her community and now even employs her husband and his mother and father.

Investing in economic opportunities for women like Neetu in developing countries is not just a moral imperative to promote equal opportunity, it's a smart business decision. Closing the gender gap can increase a developing country's GDP by up to 16 percent, according to the 2012 Global Gender Gap report by the World Economic Forum. That means more jobs, more spending and a healthier economy.

Sunday is International Women's Day, a time to celebrate and promote the contributions of women in the world. As important, it's a reminder--along with the International Labour Organization report--that there is still a great deal of work to be done to develop women leaders and bring more women into the global economy to the benefit of communities, countries and all the world.

Vicki Escarra is Global CEO of Opportunity International, which has set a goal of creating 20 million jobs by the year 2020, impacting 100 million lives around the world.