Pendleton Ward has officially stepped down as showrunner of "Adventure Time," leaving the Land of Ooo completely stunned.

Ward actually quit during Season 5, but the story only became widely known after a recent Rolling Stone article. Co-executive producer Adam Muto is reportedly filling Ward's role now. The good news for shocked fans is that the show's creator will still remain involved as a writer and a storyboard artist.

In reality, Ward's role change is just one of the many things fans might not know about the show. Sure, they probably know that snails are hidden in nearly every episode, but, if you dig deeper, more show secrets start to reveal themselves.

From the Season 5 episode "Simon & Marcy," we learn that Ice King used to be a man named Simon Petrikov who sacrificed himself to save young Marceline. In real life, the voice of Ice King, Tom Kenny, has known the voice of Marceline, Olivia Olson, since she was young, too.

During a 2014 Comic Con panel, Kenny revealed that he first met Olson as a baby when her father was the piano player at a comedy club the actor performed at.

Even more mathematical, Olson's father, Martin, is a comedy writer who voices Marceline's father on the show. (And like Hunson Abadeer ate Marceline's fries, Olson admitted her dad eats her food in real life, too.)

In an interview with USA Today, Ward explained that Ooo was originally just meant to be a magical place, but the Season 1 episode "Business Time" took things to a whole new level:

We did an episode about businessmen rising up from an iceberg at the bottom of a lake ("Business Time"), and that made the world post-apocalyptic, and we just ran with it.

Since everything in the show, from the title sequence to storylines, basically plays off the post-apocalyptic vibe, the episode represents a pivotal turning point in the series.

The lyrics for the theme song are the same ones used in the original pilot, but Ward rerecorded a second version of the theme with a ukulele instead of a guitar to send to Cartoon Network with the titles for approval. This recording was only supposed to be temporary, but the series creator explained to Art of the Title that that didn't happen:

If you listen carefully to the recording, you can actually hear Derek Drymon [former executive producer] typing on a keyboard in the bit when Jake is walking … a little clickity clack in that wide shot when his legs are stretched out ... Later, we tried re-recording it and I didn’t like it … I only liked the temp one!

Listen for the typing around the 16-second mark.

From Princess Bubblegum's amulet hanging on the tree to nuclear bombs scattered around, the opening of "Adventure Time" reveals a lot about the show.

Fan theories suggest that items in the title sequence, and throughout the show, indicate the Great Mushroom War began in the '80s and that the severed arm which appears in the opening actually belongs to Shoko, one of Finn's past lives who lost her arm after her parents supposedly sold it for a computer. This Shoko connection might also explain why Finn lost his right arm for a portion of the series.

Ward doesn't need to outright confirm the fact that Finn has a pretty strong resemblance to one of his early web comic creations Bueno the Bear. Besides the overall look of the characters, the two seem to share personality traits as well, as displayed by this hella sick beat boxing:

Also, in the Season 5 episode "Little Dude," when Finn needs a new hat, Jake says they just need to go "skin an evil bear." This could be a direct reference to Bueno. 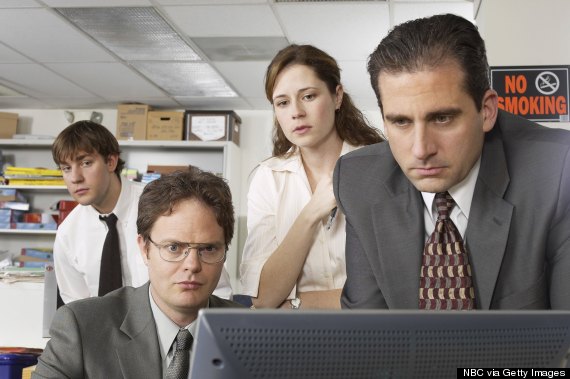 During an interview at San Diego Comic Con, Adam Muto and Kent Osborne of "Adventure Time" said they want to bring on the entire cast of "The Office" and "Star Trek: The Next Generation" for guest stars.

Cast members from "The Office" who have already voiced characters on the show include Rainn Wilson, Brian Baumgartner and Creed Bratton while cast members from "Star Trek" include Jonathan Frakes, LeVar Burton, Michael Dorn and Marina Sirtis.

Since Season 1, the role of Finn has been voiced by actor Jeremy Shada, but, as Comic Book Resources reports, Shada says he wasn't the first choice for the role:

My brother Zack … did the original pilot and played Finn in the pilot, so when it rolled around to Cartoon Network about three years later my voice sounded just like his had, and I kind of copied it a little bit too.

He went on to say there is no animosity between him and his brother, but the older Shada sometimes jokes how he should've been the character.

"Adventure Time" is officially starting to spill over into the real world. Besides painted buildings (seen here on Jeremy Shada's Instagram), Cartoon Network's Amazone theme park in Thailand actually features its own section for the show, while Taiwan became home to a high-speed rail featuring "Adventure Time" characters.

In addition, the Card Wars game from the fan favorite Season 4 episode of the same name has actually become a real thing. It's currently available in versions with actual playing cards or as an app on iOS and Android.

Recently, a live-action fan trailer for "Adventure Time" completely blew up the Internet. It seems too good to be true, but according to the showrunner Muto, the show would be interested in doing a live-action movie:

If it was like a live-action movie with like Guillermo del Toro directing that would be awesome because it would be so different than us, and it would be his version of it.