"You know what I’d like is the apple pie a la mode," Meg Ryan's character says to a befuddled waitress in the 1989 film, "When Harry Met Sally." "But I’d like the pie heated, and I don’t want the ice cream on top, I want it on the side. And I’d like strawberry instead of vanilla if you have it. If not, then no ice cream, just whipped cream, but only if it’s real. If it’s out of the can then nothing."

Many would identify Ryan's character as a picky eater. Recently, much has been written on the topic, particularly as pickiness relates to the selective eating habits of children and the proliferation of alternative diets.

But few consider the flip side of the equation. What makes someone an adventurous eater?

The term "adventurous eating" is contentious; food that seems adventurous to one person could be boring to the next, and just because a thrill-seeker musters the courage to try something new, doesn't mean they will necessarily enjoy it. There's also an ethnocentric bias. Reasonably, eating raw sea urchin is adventurous for a majority of Americans, but it might not be to someone of Japanese extraction.

Even if an "adventurous eater" is defined as someone with not only the desire to try new foods, but the ability to genuinely embrace them, the factors that determine if someone is an adventurous eater aren't entirely clear.

The Huffington Post turned first to someone who knows a thing or three about adventurous eating: Andrew Zimmern, host of the Travel Channel program "Bizarre Foods America."

At first viewing, Zimmern's program seems an exercise in shock cuisine. But he offers honest appraisals of ingredients like raw pig's testicles, cockroaches and fermented whale blubber, often focusing on their cultural importance. Nontraditional textures and flavors do not seem to faze him.

When it comes to the nature vs. nurture debate, he believes adventurousness is mostly the latter. "Children will eat when they're hungry," Zimmern told The Huffington Post. "We're ingraining ideas into them as parents by what we're eating."

His own eating habits, he said, developed during childhood. "I was just eating what my parents ate," Zimmern said. "We did the 'when-in-Rome' thing," eating fish heads in the Tropics and tripe in the North of England.

Introduction to different foods, he said, is key. "I do think that we begin to inculcate ourselves away from our own finickiness and our own pickiness ... we're not hardwired to dislike food."

But that may not be entirely true. "Until recently I would have said, 'well, it's probably all nurture'," Dr. Marcia Pelchat told The Huffington Post. Pelchat holds a Ph.D. in psychology and is an associate member of the Monell Chemical Senses Center, which studies the perception of taste and smell. "But in the past few years some evidence has come out that willingness to try new foods, which is part of adventurousness, has some genetic basis."

Among them, a recent study in the journal Obesity suggests that picky eating may be heavily influenced by genetic factors.

Pelchat also pointed to a 2007 Finnish study published in the journal Physiology & Behavior that suggests that two-thirds of genetic variation in food neophobia -- fear of trying new foods -- is genetically determined. This study noted, however, that earlier tasting of foods increased a subject's willingness to eat them in the future.

If picky eating is influenced by genetics, couldn't adventurous eating be as well? Pelchat thinks so. But willingness to try new foods is only one part of the equation.

Several studies have found that genetics play a role in the degree to which people enjoy spicy, sour and sweet flavors, and dislike some ingredients, like cilantro. Those with strong aversions might find adventurous eating unpleasant.

Variety in a person's diet, too, might affect adventurousness. "People appear to differ in their threshold for getting tired of the same thing," Pelchat said, and that might be due to genetics.

A person who never tires of eating a peanut butter and jelly sandwich might not feel the need to branch out. Variety-seekers' ancestors might have had an advantage over their peers -- they could have consumed a wider range of nutrients and been healthier overall.

Less traditional textures -- like those Zimmern samples on his television program -- also present obstacles to adventurous eating. "Some people are more able to overcome them," said Pelchat, and she believes genetic factors may be in play.

"[Textures issues] may be related to disgust, which is not necessarily a rational reason for food rejection, but it is protective in a way," she explained. "When things rot they can become slimy or gooey -- you don't want to eat a slimy cucumber or a slimy baby carrot." Dislike of slimy textures might be built in our genetic code, which could have kept our ancestors away from foods that would sicken them.

But that doesn't explain why some cultures embrace gooey or mushy ingredients, like okra, bird's nest or even Jell-O. It's possible that environmental factors, like the early introduction of such foods and repeated contact with them, could help a person overcome a biological dislike of them.

More research is required to fully understand the role genetics plays in adventurous eating. "When you get right down to it, everything is an interaction between genes and environment," Pelchat said. "It just depends on the relative proportions." 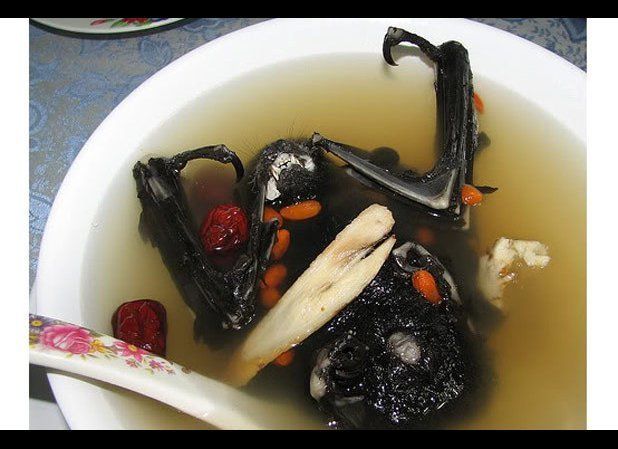 1 / 10
Bat Paste
Capture a bat, chuck it live into a vat of boiling water, season it with spices, and mash it into paste to create this potentially harmful dish (bats often carry many diseases). Andrew Zimmern of Travel Channel's Bizarre Food America tried the hard-to-locate treat in the hills outside Chang Mai in the heart of the golden triangle in Thailand.    <a href="http://www.thedailymeal.com/one-food-andrew-zimmern-doesn-t?utm_source=huffington%2Bpost&utm_medium=partner&utm_campaign=delicacies%2Baround%2Bworld" target="_hplink"><strong>Click here to see The One Food Andrew Zimmern Doesn't Like</strong></a> <em>Photo Credit:</em> © <strong>toptenz.net</strong>