"With all the progress we made in 2012... you might think advertisers would have stopped objectifying women and girls, right?"

We'd like to answer yes to the question that opens a video produced by the creators of "Miss Representation," the 2011 documentary that cast in stark relief just how badly the media portrays women.

It's true that women made huge strides in 2012 -- in November's congressional elections, in the business world and in almost every area of entertainment. But one field demonstrated little or no progress in the way it represents females:

Here are the nine advertisements that made our list of the Worst Ads for Women 2012:

9. Reebok: "Cheat On Your Girlfriend, Not On Your Workout"
As sexist ads go, this one's hardly a top offender, but when posters with the slogan were spotted at Reebok partner gyms in Germany, a Twitter outcry followed. A spokesperson for Reebok told CBS News that the materials would be removed immediately, adding, "I can assure you that Reebok does not condone this message or cheating in any way." 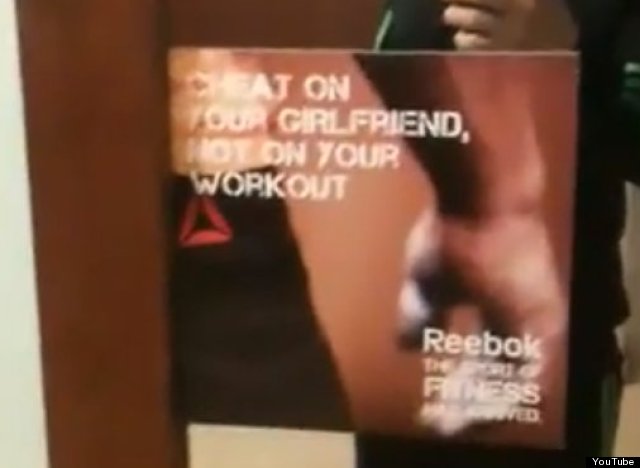 8. "Science: It's A Girl Thing"
Although the intention of this PSA was good -- getting more young girls and teens interested in science -- the video, created by the European Union Commission, relies on stereotypes that females are only interested in fashion and makeup. Love nail polish? You'll love hydrogen even more! Fashionable sunglasses are just like lab goggles! Anna Leach at Jezebel summed up the problem perfectly: "Needless to say this will a) affront women in science who want to be taken on their intellectual merits; and b) throughly mislead anyone gullible enough to get into science because they think Bunsen burners are like lipstick."

7. "Por Amor A Las Tetas" ("For The Love Of Boobs")
The purpose of this breast cancer PSA from a Chilean advertising agency was admirable: to get men involved in raising awareness about breast cancer prevention. The video's closing text translates to: "If we like them so much, we should take care of them. Make a woman get a breast exam." However, the format of the video -- showing dozens of sexy pairs of breasts and not a single face -- appears to focus much more on the aesthetics of boobs than the actual women who might be affected by the condition, and contributes to the idea of breast cancer as a "sexy" disease.

6. GoDaddy "Otter" Ad
A GoDaddy commercial that debuted during NBC's Olympics coverage introduces us to "Charlene," a young woman in a skintight bodysuit who is inexplicably petting a wet otter. Charlene's job is to lure customers to the GoDaddy site using her sex appeal, and we're told she has "forced three state senators into early retirement." Alongside Charlene we meet Karl, an average-looking, middle-aged man who keeps GoDaddy domains up and running by building and maintaining servers. Charlene is the company's shiny facade -- Karl is the one who does all the important work.

5. Fiat Palio, "The Car For The Best Time Of Your Life"
This ad has the distinction of being offensive to men as well as women. Guys, isn't your No. 1 fantasy for your girlfriend to get a boob job so you can then dive into a giant pair of surgically enhanced breasts? The connection between the car and your girlfriend's decision to get said surgery remains a mystery, though.

4. Axe's Categories Of Annoying Girlfriends...
No roundup of advertising fails would be complete without Axe, the men's toiletry brand notorious for ad campaigns portraying women as annoying, clingy and airheaded (or in one case, literally headless -- see below). True to its reputation, Axe produced several ads in 2012 that could have made this list, but two campaigns in particular stood out. The first consists of five videos showing how a man can keep up with his super-stereotyped "brainy," "sporty," "flirty," partying" or "high maintenance" girlfriend. Washing with one of the Axe shower gels, the ad promises, will magically enable the user to endure whatever trials he encounters on the way to getting laid.

3. Axe's Headless Boobs
A video promoting Axe hair products shows a budding romance between a disembodied head of hair (the male character) and a large set of breasts (the female character) working in the same office. The closing caption reads, "Hair: it's what women notice first" -- suggesting that men notice women's breasts first, which isn't nearly as bad as the message the visual itself sends: that working women are ultimately pairs of boobs walking around the office.

2. Virgin Mobile USA
There's sexist advertising, and then there's advertising that suggests sedating or even offing your wife. Richard Branson apologized for this tasteless ad, which was pulled from the Virgin Mobile USA website shortly after it was uploaded. 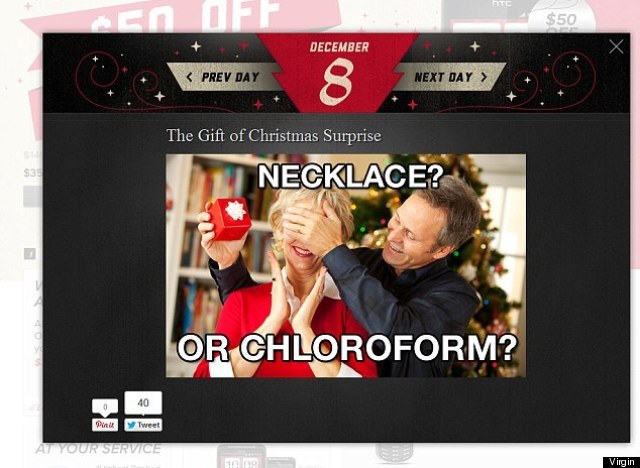 Ron Faris, the head of brand marketing for Virgin Mobile USA, told BuzzFeed in an email: "In no way does Virgin Mobile USA support sexism or domestic violence... We apologize deeply to anyone who has been offended by this posting."

1. Belvedere's "Go Down Smoothly" Poster
And now for the 2012 ad that surpassed all the rest in its objectification of women, joking acceptance of violence against them and alleged image theft. Congratulations to Belvedere Vodka, who posted this ad on its Facebook and Twitter accounts, then pulled it almost immediately. The company apologized on Twitter:

We apologize to any of our fans who were offended by our recent tweet. We continue to be an advocate of safe and responsible drinking.

As James Poulos at Forbes observed: "If you find yourself rushing to take down an ad that could be interpreted as making light of rape, you're doing internet marketing wrong."

As of April 2012, the actress featured in the image was suing Belvedere, claiming that the company stole her image from another YouTube video. 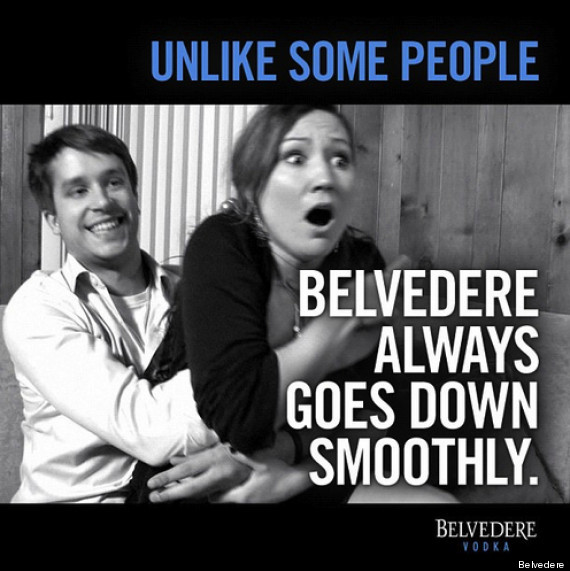 So now that you've seen the worst (at least the worst we can publish here), it seems worth noting that the advertising industry is not uniformly terrible to women. There are good ads, as seen in AdWeek's list of the best advertisements of 2012. Dove created its "Ad Makeover" spot to increase media literacy and raise awareness of the unfortunate messages so many ads send women. (Oddly, Dove is owned by Unilever, the same company that owns Axe. Discuss.) But we need more positive depictions of women in advertisements. After all, as the Missrepresentation video below puts it, "you can't be what you can't see."