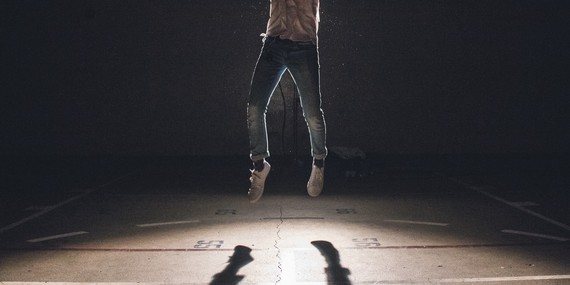 It's tough to see where you should be stubborn and where you should admit defeat though. Because even the geniuses, the generals and the giants of our world have known that from time to time, admitting defeat is the right thing to do. If you can be honest with yourself and make that call, that it's time to quit and it's the right time to quit - you'll be better equipped to take on your next project.

Who knows. Your next shot could change the world.

Walk Away.
There is no shame in walking away from a project. Sometimes you can't do much of anything else. When the chips are down, and you're out of options, when there's no more money left and you can't keep funding your idea, this is when you need to be able to move on with your pride intact.

Walking away means turning a page. It means taking something into which you've poured everything you had, something you've worked on till your fingers bled, and putting it firmly in the past. That's heartbreaking.

But if you don't walk away, if you can't move on instead of remaining deeply emotionally invested in something that has failed, you'll never succeed anywhere else.

Write About It.
You need to get it out of your system. Your start-up failed, your art failed, your career failed. Whatever happened, expressing it is going to help you work through it. I'm a big fan of working through my mind slowly and clearly when I'm wrong. It makes me more accountable and it pinpoints mistakes and issues.

When you've failed truly spectacularly, my best advice is to put it down on a page. You don't have to show that page to anyone, but you have to succinctly explain, in clear, simple language exactly what went wrong and why.

Make Amends.
When you've failed, the chances are - you've taken a few people down with you. And that sucks for them. Your employees, your collaborators, they relied on you because they believed in you, so completely. The failure has affected you, sure - but it's probably been even more shitty for them.

You may never respect yourself.

Rely On Your Support Network.
Go home and sleep on your Mum's couch for a few days. Call the friends you probably haven't seen because you've been working your ass off trying to avoid disaster. Reconnect with your mentors. You need to use your support network to patch up your wounds now. They'll be happy to do it.

If you don't have a support network? That sucks. But you should find one. Find like minded people who you can discuss what happened with. Rediscover your connections with people who got left behind.

Basically, do whatever it takes to get people in your corner who can help you...

...Get Back In The Ring.
The longer you wait before you try, try again the harder it will be. If you ever want to achieve success and victory, and reach a point where you can look back on your worst fucking failures and smile, you have to get back in the ring and keep swinging. Your next project doesn't have to be huge, after a failure. It can be tiny, it can be simple. Your tech start-up failed? You could found an email newsletter, something incredibly easy to get off the ground.

If you can win a small victory there, it's going to go a long way towards making up for the bigger failure. Plus, when you're reeling from a loss, you're going to be thinking creatively.
You'll still have some left over, panic induced adrenaline that can drive a new project further and harder than you thought possible.

Remember this. Everyone is a failure sooner or later, to a different degree. Me, you, everybody. There are no exceptions. If you think that being a failure means you don't have worth and value, you couldn't be more wrong. Being a failure is being alive, it's taking risks and fighting for something.

Far better is it to dare mighty things, to win glorious triumphs, even though checkered by failure... than to rank with those poor spirits who neither enjoy nor suffer much, because they live in a gray twilight that knows not victory nor defeat.