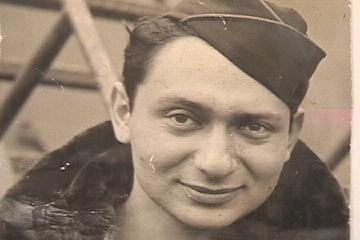 Not surprisingly, one of my earliest memories is of my father telling me something.

Maybe it was my first lesson in intuition, insight and savvy. I knew by the way he said it that what he actually meant was, "You're special. Very special."

And he knew I knew. And so the dance began.


In 1947, my father was a young GI coming home from Europe to his war bride -- my mother. I was born within a year of his returning stateside -- part of the first wave of baby boomers.

Eventually my mom and dad moved out of my grandparent's house into their own place. The wooden kitchen cabinets were painted yellow. A Lazy Susan was bought for Sunday night dinners of corned beef, pickles and rye bread. A deep maroon paisley couch with tassels was picked out and delivered.

So was a metal swing set. Not assembled.

The metal swing set is new, bright, shiny, massive and all mine.

My dad works all day assembling the metal monster as I sit and watch. After hours of tedious labor, he digs four holes in which to place the swing set's main poles. To my surprise, he sets the poles in concrete.

Most Dads just dug a shallow hole and set the swing set's main support poles in the dirt. The higher the swing went, the more the poles wiggled, vibrated and lifted out of the hole. Swinging kids squeaked with terror and delight as the whole structure rose, shuttered and fell back into place. I was always afraid that one day the entire swing set would just tumble over.

Perhaps sensing my fear and having lived through his own fears during combat missions as a ball turret gunner in the European Theater during World War II, my dad grounds my swing set in concrete. I can swing as high as I want -- unencumbered by dread of the entire mass becoming airborne.

I plant my bottom on the red metal seat. The heat from the metal stings the backs of my bare legs. I grimace. I squirm a little from side to side. The toes of my clean white Keds brush the grass. I bend my knees and swing my feet forward. Lean back and push off. I start the climb to the sky -- head tilted back to see the great blue expanse -- my pony tail waving wildly from side to side.


The years pass. The grass underneath the swing set is matted down. Then worn away. Then reduced to finely ground brown grains that look like home plate on a kid's makeshift baseball field. The red seats are not as shiny. The supporting poles have a few dents from my swinging crazy. And rust spots are starting to appear.

More years pass. I graduate. Go to college. Marry. Divorce. Remarry. I have the kids and bake the cookies. And do the wash. And drive the car pools.

Always with back-up, behind-the-scenes coaching from my dad, an Eighth Army Air Corp veteran:
Never let them see you sweat
Make it look easy
Do it your way
Do it

Many years later, my own kids move away. And then my husband and I move away too. And my father, the jaunty World War 2 staff sergeant, dies just weeks before his 90th birthday.

When I come back to visit, I notice that the swing set is now old and rickety. The push off mound is sunken in with shallow gullies. The chains are disjointed. The rust is heavy. The seats hang crooked.

The swing set, like me, is well past the half century mark. We are both defined, grounded, centered and structured. Marked by age. Touched by repeated exposure to the elements.

I approach the swing's red seat warily. It looks so flimsy. Can it hold me? I settle in. Squirm around. Slowly push off and up. I arch my back and hang on tight.


My father gave me a firm foundation in which to grow. And wings with which to soar. Without him, I would never have had the motivation, the zest, and the inspiration to get through life. Much less enjoy it.

"Thanks, Dad -- not just for your past military service to our country -- but for the outstanding job you did after the war as my dad. I wish you were still around so I could spend Father's Day with you."