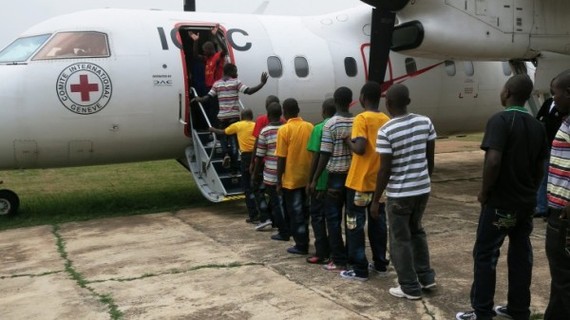 Grim images from the small world of children are multiplying. Little bodies adrift in the Aegean and Mediterranean seas. Uncomprehending faces pressed against wire fences and barricades in Europe from the Balkans to the French port of Calais. At least 17 Syrian children and their pediatrician slaughtered by a bomb apparently targeting a hospital in Aleppo. Little boys in South Sudan picking up guns to defend their communities because no one else will. Militants and soldiers turning schools into battle stations.

In the background, at least 1.5 million children dying annually from vaccine-preventable diseases and scores perishing in epidemics that overwhelm unprepared and underfinanced public health services.

Less often seen, or mostly unseen in the news are the organizations and individuals not only grappling with daily horrors but also seeking formulas for better, more sustainable ways to protect children and young people, who form the largest sector of the population in many developing countries. Seasoned advocates see the need for more collaboration internationally among diverse supporters of children, and sometimes more interaction with violators of child rights. Backed by rigorous data collection and analysis in the field, they are testing what works.

But while this cooperative approach can be a key to firming up successes, advocates are always aware that there can be reversals and new shocks.

"We of course focus on the bad things that are happening to children," said Zama Coursen-Neff, the executive director of the children's rights division of Human Rights Watch. "Our organization as a whole has done so much on the targeting of civilians in conflict, like in the war in Syria. So much of the damage that has been done there has been done to children."

She added that in schooling alone human development has been rolled back, "particularly for a country where most people get an education -- and now are not.

"But if you look at global statistics -- on access to education, involvement in the worst forms of child labor -- the overall trend is good," Coursen-Neff said in a phone interview. "Overall, there are more children who have access at least to primary education and far fewer children, even millions fewer children, who are involved in the most dangerous forms of child labor.

"There is a long trend toward reduced use of child soldiers," added Coursen-Neff, who worked in Sri Lanka during its civil war and in other disturbed areas. "Back in 2000, there were probably at least twice as many child soldiers as there are now." Concerted stigmatizing of the practice internationally is having an effect, she said.

Still, the number of child soldiers is going up again in conflicts in the Middle East and in West Africa, where Boko Haram has not only kidnapped hundreds of children -- some say more than 2,000 -- but has also turned some of them into suicide bombers.

"A child can be manipulated, drugged," Coursen-Neff said. "You think about the Taliban training of young boys. What does it mean if children are taken away from their parents and don't have normal human interaction with girls and women? What that does to a person?"

The Global Justice Center in New York recently renewed its call for the United States to repeal restrictions against international abortion aid to help save girls impregnated by Boko Haram and others in conflicts that can take on ethnic, cultural or sectarian dimensions. The center has submitted a brief to the International Criminal Court on the issue, demanding that any future prosecution "must include rape and enslavement as war crimes, crimes against humanity, and genocide."

The group describes this American stricture against medical abortions for abducted girls, which is contrary to United Nations policy, as "a denial of their rights under the Geneva Conventions as war rape victims." If and when girls who have endured sexual abuse are freed, they need a full range of reproductive health care. Survival is just the beginning of recovery.

At Human Rights Watch, Coursen-Neff has also led research into the danger being posed to children when militants and military forces fight in and around schools, in which both children and teachers have been killed. In southern Thailand, a largely Buddhist country where Muslim separatists have been active, schools were caught in the middle.

"For example, in southern Thailand, where government schools have been a symbol of the imposition of the Thai language, Thai culture, the schools have been in the crosshairs of Islamist insurgents," she said. "There were teachers who were executed in front of the children." When militants carry out these attacks, she said, "then schools can actually become military targets under the laws of war."

Armed attacks, the commandeering of schools and the abduction of children done in the name of cultural or religious impulses have also occurred in Afghanistan, where militants proclaimed they were acting to stop Western education; and in Sri Lanka, where the separatist Tamil Tigers abducted both boys and girls to turn them into fighters against the country's majority ethnic Sinhalese and other Tamils who did not support the rebels' political cause.

In Somalia, girls have been kidnapped from schools and forced to become brides of militants. In the relatively new nation of South Sudan, more than eight months after a peace agreement was brokered, children are being dragooned by warring factions in a politically motivated war or killed in what John Fisher, the Geneva director at Human Rights Watch, characterizes as "gruesome massacres" of civilians.

In Ukraine, Human Rights Watch found, both sides fighting in the eastern part of the country, where Russian-backed rebels operate, are using schools as armed posts or are deliberately damaging or destroying them.

In India, the invasion or use of educational institutions by military or police forces has been common, human-rights organizations and Indian media report. This is particularly true in places where leftist guerrillas have seized schools in rural areas or remote regions populated by tribal people, making these schools targets for security forces.

In Kashmir, a disputed territory under international law, Indian troops and members of the paramilitary Central Reserve Police Force have clashed in recent weeks with protesting students and pro-independence militants on university-level institute campuses in and near the city of Srinagar.

Neither India nor Thailand has signed the 2015 Safe Schools Declaration, with its accompanying guidelines on the protection and continuation of education in armed conflict, written in international consultations led by Norway and Argentina. There are now 53 signatories to the informal consultative agreement. The United States is not one of them, nor are Britain, China, France and Germany, among other major countries.

Advocates for children say they are convinced that building coalitions and collecting more reliable data and extensive research on threats to children are imperative. A broad effort may bring in representatives of the military, or people who can talk with defense or police officials more easily and effectively than child advocates often can. In the case of military use of schools, Coursen-Neff said: "I had aid workers, for example, say, Yes, of course there were schools that were attacked or being used. But there wasn't a sense that this was something they could respond to or do something about."

She added: "There has always been collaboration with folks who are very comfortable talking with ministries of education, but not the military. So total collaboration has been very important." And it seems to be working, in her judgment.

Jessica Lenz is the senior program manager for protection at InterAction, a Washington-based alliance of more than 180 nongovernment organizations working in poor communities around the world. Lenz is currently in Colombia assessing the results of protection projects introduced before a recent cease-fire to prevent or reduce the recruitment of children by various armed groups, "particularly the element of contributions by multiple actors at multiple levels to solve a problem," she wrote in an email.

On this trip, Lenz is focusing on the Nariño region in the Andean highlands of southwestern Colombia on the Pacific coast, bordering Ecuador. Her plan is to identify and document examples that illustrate effective protection strategies. Her mission in Colombia is part of an initiative to document the important elements of results-based protection efforts worldwide that produce measurable results.

In Colombia, said Burt Edwards, director of media and web strategy at InterAction, "Our goal is to retrace the actions of key civil society actors and identify actions and strategies that led to a change in behavior, attitude, policy, and/or practice that in turn led to a reduction in child recruitment."