Our political process has become routine over the past months: The AfD (Alternative for Germany) party wins an election, and their political opponents and the press immediately attribute the victory to the refugee crisis.

Merkel's immediate decision to let more than one million refugees and migrants into Germany has become a political lightening rod. Her critics have often attributed the much maligned policy to the country's marked rise in right-wing nationalism.

However, there are other factors that feature prominently in Germany's changing political landscape. For quite some time, many Germans have felt abandoned by the establishment. They work hard, yet have no means of saving money for their families.

An increasing number of Germans no longer buy the oft-repeated declaration that Germany is a rich country. According to a study conducted by the German Institute for Economic Research, 40 percent of Germans do not earn enough money to put aside savings for their future.

Despite many politicians touting steady economic growth, Germany has seen income inequality continue to rise over the past few years. Of the 40,000 people classified as "super rich" in Germany, nearly a fifth are billionaires. For many Germans, the economy feels like a lottery they gave up any hope of winning long ago. 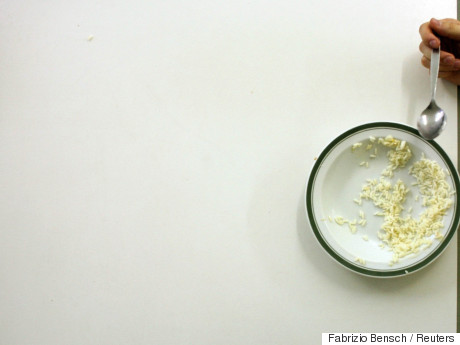 Nearly Two Million Children Are In Poverty
Inequality grew under former chancellor Gerhard Schröder and his successor Angela Merkel. Germany now has nearly 2 million boys and girls growing up in poverty, according to a study recently published by the Bertelsmann Foundation. The latest findings mark an increase of 52,000 from 2011. One in four families does not even have enough money for a short vacation.

The number of Germans who can no longer support themselves on their pensions and savings has also been on the rise. In 2014 over half a million elderly people were dependent on social security, meaning that the government increased their pensions to match unemployment payments. In 2003, it was only half that number.

Increasingly, the promise that "anyone can do it" is met with mockery, as more and more people are working until they burn out. Many Germans were outraged when Finance Minister Schäuble celebrated a a two-Euro monthly increase in child benefits, at the same time thatbillions were being allocated to refugee support.

The Increase in Child Benefits Equals Two Jars of Baby Food
The middle and lower classes have had to cut back on expenses time and again. Yet, no leader in the current government is telling them "we can do it,' and throwing vast sums of money at them.

It can also be assumed that a father who goes to the supermarket and sees that those extra two Euros is barely enough for two jars of baby food is not singing the praises of the current regime.

When vast swaths of the population have lost faith in establishment parties, it can quickly lead to a crisis.

It is hardly surprising to many that all is not well in Germany. What is new is the fact that millions of frustrated people now have a different outlet for their simmering frustration.

Nearly A Third of Voters Have Turned Away From Established Parties In Some Districts
It used to be that a significant number of people dependent on welfare voted for Die Linke (The Left Party). However, an increasing number of them are simply no longer going to vote, since from their point of view, workers who desire equality in Germany yet have conservative opinions on other issues, have not had a representative vote in a long time.

Today, many of these people are voting for the AfD. The Left Party is still strong in many parts of Germany, especially in those places with weak economies. In the state of Saxony-Anhalt, more than four out of ten voters chose either AfD or The Left Party, while in Mecklenburg-Vorpommern a solid third of voters chose one of the two. In Berlin, The Left is the strongest party. However, that fact didn't stop the AfD from winning some seats in the state elections.

In Berlin's Marzahn-Hellersdorf district, 54.5 percent of voters supported either the Left Party or the AfD. Only around 30 percent of voters in the eastern part of Berlin voted for the SPD, CDU, Green and FDP; parties that for decades have controlled the Bundestag and nearly all local governments.

When vast swaths of the population have lost faith in establishment parties, it can quickly lead to a crisis. Millions of people in our country evidently no longer believe in the tenets of a social market economy.

Working Families Need Better Support
The current governing coalition must take action immediately. Thanks to huge amounts of fiscal revenue and low interest rates, there is plenty of money to be put towards an extensive program for development and family support.

Anyone who works and supports children should receive aid from the government in the form of tax breaks or social security contributions. More importantly, more must be done for the millions of struggling single parents .

The government must spend more on nurseries, schools and social services. Something that would happen if the government started listening to the people instead of the finance industry. An EU-wide tax on financial transactions, for example would be a good place to start. In fact, such a tax would net an additional 45 billion Euro to Germany alone. Sadly, Merkel has thus far shown little assertiveness in this area.

If the government continues on its current path, it is in for a rude awakening sooner than later.

If the government continues on its current path, it is in for a rude awakening sooner than later. Many employed as well as unemployed people are already voting for the AfD. The party has recently changed its position on numerous social and political issues. If the welfare state faction of the party succeeds against the economically-liberal faction, the AfD could remain in second place, even if the refugee crisis is resolved. In many places, it could even become a leading party.

CDC, WHO, Uganda To Host Regional Meeting As Ebola Spreads