Written in Collaboration with Jenny Shelby

Not all threats to our nation are overseas. Within our own borders, enemies such as chronic and infectious diseases, as well as rising medical costs, threaten individuals, families, communities, and the national security of our country. Health care costs constitute 18 percent of the Gross Domestic Product (GDP) of the United States, amounting to $2.6 trillion. In comparison, approximately 6 percent of the GDP is spent on defense. Although the U.S. spends twice as much on health care as any other nation, the World Health Organization (WHO) reports that the United States ranks 50th in life expectancy and 39th on the overall health status of its citizens worldwide. America's health care system is in crisis: It is a "sick care" system, not a health care system. However, healing has now begun. Just over a month ago, the United States Supreme Court handed down its landmark ruling to largely uphold the Patient Protection and Affordable Care Act of 2010, a major step toward redesigning the U.S. health care system and improving the health of all Americans.

Why was the health reform legislation needed?

The current American health care system is a patchwork composed of a fragmented combination of private sector and government-funded programs. One-third of all Americans participate in a federal health plan -- be it Medicare, Medicaid, the State Children's Health Insurance Program, U.S. Department of Defense Programs, the Veterans Health Administration, or the Indian Health Service. But the majority of Americans -- 64 percent -- are enrolled in a private health insurance plan, and 45 percent of them receive health insurance through their employer. The recent recession has resulted in high rates of unemployment, stripping many Americans of the health insurance they once had. More than 1 million Americans lost their employer-based health insurance between 2009 and 2010 alone. In total, 50 million people in the United States -- 1 in 6 Americans -- are uninsured. That is equivalent to the combined populations of 25 states. In the United States, 45,000 die every year due to lack of health insurance -- one every 12 minutes.

Furthermore, health care costs in America are rising dramatically. It is estimated that medical expenditures will total $4.8 trillion by 2021, comprising 20 percent of our nation's GDP. The health insurance premiums of family coverage paid by employers have already increased 50 percent in just seven years between 2003 and 2010. These rapidly-rising health care costs have severe economic implications -- crippling America's businesses and decreasing their competitiveness. Every 30 seconds a person goes bankrupt in the United States due to an inability to pay their medical bills. Moreover, Americans simply do not get the quality of care that we pay so much for when visiting the doctor. A Rand study finds that U.S. physicians follow best practices for diagnosis and treatment only about 55 percent of the time.

Health care costs are just one component of our nation's health care crisis, and costs are compounded by preventable chronic illness. Three pandemics -- tobacco use, obesity and lack of physical activity -- have overwhelmed the American health care system, creating a tidal wave of chronic diseases, robbing our country of the productivity and funds needed to build healthy communities. Today, 20 percent of Americans smoke, and this health-damaging behavior is linked to 443,000 deaths in the United States annually. And 67 percent of Americans are obese or overweight, which is a major contributing factor in heart disease, Type 2 diabetes, stroke, some forms of cancer and many other illnesses. Nearly half of all adult Americans are living with a chronic disease, and seven out of 10 deaths among Americans each year are due to chronic illness. In addition, 96 percent of Medicare dollars and 83 percent of Medicaid dollars are spent to care for people with chronic conditions today.

While 75 percent of the $2.6 trillion expended on health care in the United States is for the treatment of preventable lifestyle-related diseases, only 3-5 percent of America's health budget is spent on the prevention of these illnesses. This is like waiting for your car to break down before taking it in for maintenance.

For more than a century, Americans have debated how to extend health care to all Americans. After decades of failed attempts, President Barack Obama made history. On March 23, 2010, the Patient Protection and Affordable Care Act was signed into law. This legislation has become the most significant advance in health care since the establishment of Medicare and Medicaid in 1965.

Yet, despite the significant health care crisis in America today, 28 states and the National Federation of Independent Businesses challenged the constitutionality of the health reform legislation. On June 28, 2012, the U.S. Supreme Court largely upheld the law. As a result, it will now be implemented with benefits for all Americans.

Redesigning the U.S. Health Care System for the 21st Century

The Affordable Care Act of 2010 redesigns the American health care system for the 21st century, emphasizing efficiency, equity, effectiveness, coordination, and innovation. With this legislation, our nation will move toward a modern, integrated system of care that provides coverage to almost all Americans, including the uninsured, but importantly enriches benefits for those who already have health insurance.

The Affordable Care Act provides Americans with a "Patient's Bill of Rights" that eliminates discriminatory practices by insurance providers. The law establishes that insurance companies can no longer:

The new health law fosters progress in health care practices and innovation, improves coordination of care, enhances the use of health information technology (HIT), including electronic medical records, and increases the transparency of health outcomes in our country. The Affordable Care Act puts an emphasis on HIT with the goal of creating a seamless system of care as well as reducing medical errors that injure 1.5 million Americans and cause more than 100,000 deaths annually.

The legislation plans to extend health insurance coverage to more than 30 million people in the United States. Starting in January 2014, all Americans will be required to hold health insurance or pay a penalty (tax) to the U.S. Treasury on their federal income tax return. The law also encourages states to expand Medicaid income eligibility so that more people will qualify for this federal program.

With the individual mandate, everyone buys health insurance, which spreads the risk and increases the pool of funds available to pay for health costs when sick people need care. As a result of the legislation, healthy people who previously did not hold insurance will balance the cost of medical bills for the ill, and the newly-insured healthy people also benefit by having insurance coverage should an unexpected illness or accident send them to the hospital or require other medical services. Right now, insured families are already paying an extra $922 annually on their premiums to subsidize the costs of the uninsured.

The individual mandate does not force Americans to buy insurance that they cannot afford. For those Americans who cannot cover the full cost of insurance premiums, the federal government offers premium subsidies for people living between 133 percent and 400 percent of the federal poverty line ($14,856 to $44,680 for individuals and $30,656 to $92,200 for a family of four). The law also allows for exemptions from the mandate tax if the cost of an insurance policy exceeds 8 percent of a family's income, which would be prohibitively expensive for individuals and families even with a federal subsidy.

Enhancing Health Care for All Americans

Importantly, the Affordable Care Act enriches insurance coverage for all Americans. Preventive services, such as cholesterol checks, colonoscopies, HIV and HPV testing, and mammograms, will have no out-of-pocket costs for patients. Since 2010 when the law was enacted, 86 million people have already received at least one free preventive service as a result of this legislation. 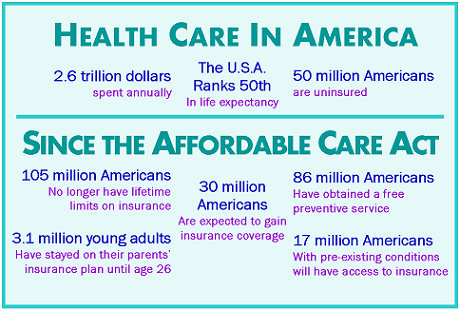 Furthermore, young adults can stay on their parents' insurance plans until age 26. Since the passage of the Affordable Care Act in 2010, the uninsured rate among young adults has dropped from 28 percent to 23 percent. Insurance companies are incentivized to keep these young, healthy individuals in their pools. To date, more than 3.1 million young people have benefited from this provision.

The Affordable Care Act is the start of a "prevention revolution" in America. The focus of our nation's health care system will begin to shift from treating the sick to also keeping the healthy well and detecting disease early when there's the best chance of cost-effective interventions and cures. All Americans will benefit from a transformed, modern system of health care that increases innovation, efficiency, effectiveness, and equity. The Affordable Care Act stands as a mark of progress towards healing America's ailing health care system, providing a roadmap for ensuring a healthier future for us all.

Rear Admiral Susan Blumenthal, M.D., M.P.A. (ret.) is the Public Health Editor of the Huffington Post. She is also the Director of the Health and Medicine Program at the Center for the Study of the Presidency and Congress in Washington, D.C., a Clinical Professor at Georgetown and Tufts University Schools of Medicine, and Chair of the Global Health Program at the Meridian International Center. Dr. Blumenthal served for more than 20 years in senior health leadership positions in the Federal government in the Administrations of four U.S. Presidents, including as Assistant Surgeon General of the United States, the first Deputy Assistant Secretary of Women's Health, as a White House Advisor on Health, as Chief of the Behavioral Medicine and Basic Prevention Research Branch and as Chair of the Health and Behavior Coordinating Committee at the National Institutes of Health. Admiral Blumenthal has received numerous awards including honorary doctorates and has been decorated with the highest medals of the US Public Health Service for her pioneering leadership and significant contributions to advancing health in the United States and worldwide. Named by the New York Times, the National Library of Medicine and the Medical Herald as one of the most influential women in medicine, Dr. Blumenthal is the recipient of the 2009 Health Leader of the Year Award from the Commissioned Officers Association and was named a Rock Star of Science by the Geoffrey Beene Foundation. To learn more about Susan Blumenthal, M.D., visit 4globalhealth.org.

Jenny Shelby is a rising senior at Yale University, studying sociology and public health as a Yale Global Health Fellow. She leads Yale's largest undergraduate community service organization, Community Health Educators, serving as Co-Coordinator to mobilize a group of over 150 student volunteers who provide comprehensive health education in New Haven public schools. Jenny is currently a Health Policy Intern at the Center for the Study of the Presidency and Congress in Washington, D.C.